Boxers releases their debut EP, Dreams, to a packed Legion 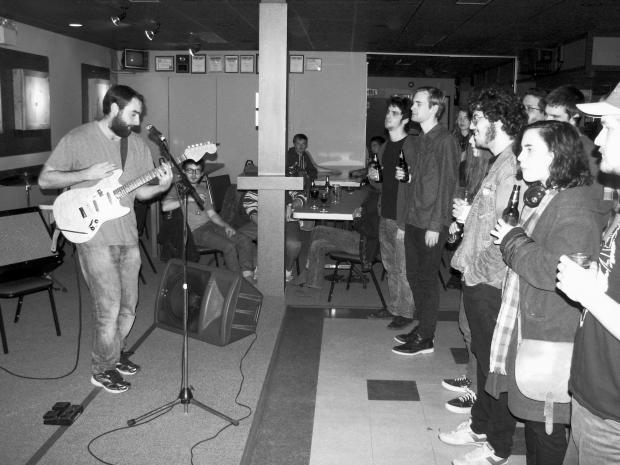 Last Thursday marked the release of local artist Chris Meaney’s debut EP. Boxers, his collaboration with Lucas Hicks and Andrew Jaycock (although the latter was not present at the event), performed at the Legion to celebrate the release of their EP Dreams. The night also featured an echo of February’s RPM challenge with Phil and Friends and also seminal sludge-punk duo Construction and Destruction.

Phil and Friends kicked the night off with a couple of songs from the album that the RPM challenge mandated was made solely within the past February. Their fast-paced, upbeat punk rock stayed consistent with the friend group’s debut at the Legion but was all around tighter performance, giving way to a solid footing for the rest of the night to build on.

Rural Nova Scotia’s Construction & Deconstruction, who play consistently in Sackville, played a set that was true to their “power tools after dark” comparison and were no doubt as “sparse, unkempt and challenging” as they claim. Filled with the power of a lumbering giant, their blown out tunes gave the whole night a heaviness and weight about it. Grinding, deliberate pacing matched up perfectly with a slow escalation to noise, demonstrating the benefits of the duo’s hermit-esque songwriting method and displaying an unparalleled originality. David Trenaman and Colleen Collins shared multi-instrumentalism granted the set a shifting progression as well and transcendence beyond any range of sound a duo would typically be limited too. The constant shifting of instruments and places complimented both the tension and theatricality of their set.

The shiftiness, so to speak, carried on into the headlining performance where Meaney, sometimes accompanied by his backing band,  though not always, pieced together a set. From a stripped down, nearly a capella performance, to a full garage, effect laden cacophony, the set varied with stops in between marking every song. Perhaps the source of the name Boxers, a bit of beat boxing even popped up to provide the rhythm for one of Chris’ solo songs. The variety did keep the mood light and evoked the feeling that a lot of experimentation had gone into the crafting of both the performance and the album. The driving idea behind the music yielded a different experience than the usual ideas of garage rock, taking the all too prevalent nihilism out of its heart and replacing it with a hopefulness that went a long way toward putting a positive spin on the night, and a unique spin on the music. The surprisingly big turnout, at points making the Legion seem uncharacteristically packed, left no doubt that the night was a sure success.