But Art Belongs to the Unconscious: A student research project 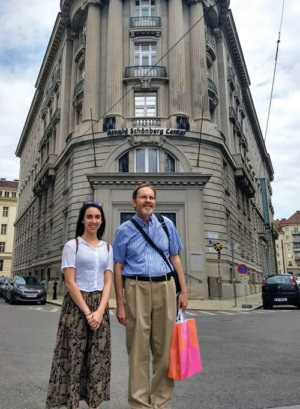 Mount Allison students have plenty of opportunities, from academic to extracurricular – and they aren’t limited to just the school year. While some students enjoy escaping school during their downtime and choose to relax, travel, work or spend the summer at home with their families, others continue with their academic interests during the warmer months. One of these opportunities comes in the form of independent student research grants.

Designed for students entering their final year of post-secondary education, the program awards grants (typically valued at $7,000 each) to students who wish to conduct research or independent creative projects from May to August. Students in all disciplines of study may apply for this grant.

Martine Jomphe, a bachelor of music student, grabbed ahold of this opportunity and worked diligently over the summer with Dr. Gary Tucker, an associate professor in the music department. Tucker said that Jomphe, who entered her fourth year of study this September, was the 24th student he has mentored in summer research projects over the years.

In a nutshell, Jomphe examined Arnold Schoenberg, a late 19th- and early 20th- century Viennese composer, and painter Wassily Kandinsky, who rose to prominence around the same time.

The final product of Jomphe’s research was an extensive paper of over 100 pages – comparable to a final thesis that one might see in graduate programs – as well as a presentation. In fact, this research grant is a prime opportunity for students who are considering furthering their education in grad school. Jomphe presented her work to faculty and students in Brunton Auditorium last Wednesday.

Jomphe entitled her presentation But Art Belongs to the Unconscious: Schoenberg’s Atonality and Kandinsky’s Abstraction. In her work, Jomphe focused particularly on Schoenberg as he was developing atonality in his music. Between 1908 and 1911, Schoenberg examined the role of the unconscious mind through his abandonment of tonality. Schoenberg disregarded common structures in music such as the use of keys or the arrangement of certain notes and chords. As a result, many of his pieces sounded rather random and it appeared as if there was no method to his them at all.

“I was looking to see if the unconscious has a link with the emergence of atonal music,” Jomphe said.

While Schoenberg was experimenting with atonality, Kandinsky was developing abstraction in his paintings, which formed a link between their works. Specifically, both artists abandoned an important frame of reference in their fields and as a result they pushed the limits in their respective fields. For Schoenberg, this was the tonal system; for Kandinsky, it was representationalism. Jomphe looked at the relationship between Schoenberg and Kandinsky and how each man’s work was influenced by the use of the unconscious mind.

In developing her topic, Jomphe drew both from her own areas of study – music and psychology – as well as from her advisor’s. Tucker’s expertise on Arnold Schoenberg and Viennese music influenced the direction of her research.

“I had no idea what I wanted to research. Dr. Tucker already had the idea and I really liked it,” Jomphe said. “I’m doing a psychology minor and this topic looks at the unconscious mind, so I was happy I could relate the topics with knowledge from my minor and put that in my paper as well.”

Jomphe had the chance to travel to Germany and Austria at the beginning of her research, and met with Tucker in Vienna. While abroad, they began laying the foundations of Jomphe’s research through weekly meetings and visited several special exhibitions at the Arnold Schoenberg Centre. Jomphe said her travel helped her see her research in a different setting, something that was beneficial to her research project.

When asked how her research influenced her own musical journey, Jomphe replied, “It just teaches us that music is more than tonality.”