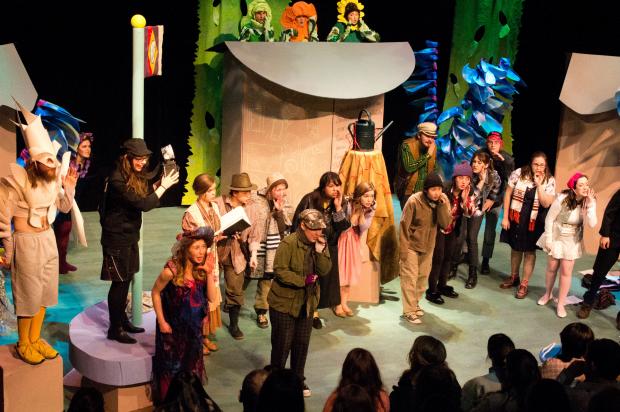 With talking flowers, a mischievous seagull, music, clowning, puns and a healthy dose of social commentary, Tintamarre’s production of Détours was a refreshing and unique take on children’s theatre.

Every year, Alex Fancy, founder and director of Mount Allison’s bilingual theatre troupe, Tintamarre, takes on an invariably daunting task: Tintamarre accepts all students who join, regardless of their acting experience or knowledge of French or English. All members are guaranteed a role in the club’s final production.

This open-door policy routinely results in some of the largest casts in Motyer-Fancy’s first season. This year’s production of Détours was evidence of this, as it featured twenty-four dedicated actors.

The script, which combines both French and English dialogue, strives to be comprehensible to speakers of both languages, and must be versatile enough to entertain local elementary school children, as well as an adult audience at Mount Allison. Given these unique challenges, Fancy’s heart-warming production of Détours is worthy of acclaim.

Détours is set in l’École Détours, a decidedly New Age school for troubled children that emphasises the healing power of art and nature. The school was founded by Rose Fleur, an erstwhile alternative educator who disappeared into the woods while on a class trip. The mystery of Fleur prompts two bumbling journalists, played by Mitchell Gunn and Joanna Perkin, to make the pilgrimage out to the school.

But they are quickly chased off by a seagull and are replaced by various talking plants, good-natured local punks, an anthropomorphic tree stump, and the assorted children who have come to l’École Détours to work through their personal issues.

While the sheer number of different characters who appear in this play can at times be overwhelming, Fancy proved to be a deft hand with choreography, and ensured that the movement of his oversized cast always seemed natural and organized.

In some ways, the size of the cast is one of the production’s greatest assets, allowing for charming segues into song that helped bring life to the script. The cast also deserves praise for the well-rehearsed examples of speaking in unison, which allowed Fancy to emphasise the play’s environmental morals.

However, at times these morals did feel slightly contrived, and there was a general lack of conflict driving the plot development. While the play could certainly be enjoyed by audiences of all ages, it felt as if the script was more tailored toward young children.

The set, designed by Decima Mitchell, was a tour de force. The bright green backdrops and otherworldly trees were highlighted by a bold lighting scheme developed by Paul Del Motte. The setting, part Dr. Seuss and part boreal forest, fostered a sense of intrigue that complemented the play’s emphasis on the power of the natural world.

Détours was a magical play that is sure to delight elementary and middle school children across the province when it goes on tour at the end of the semester.