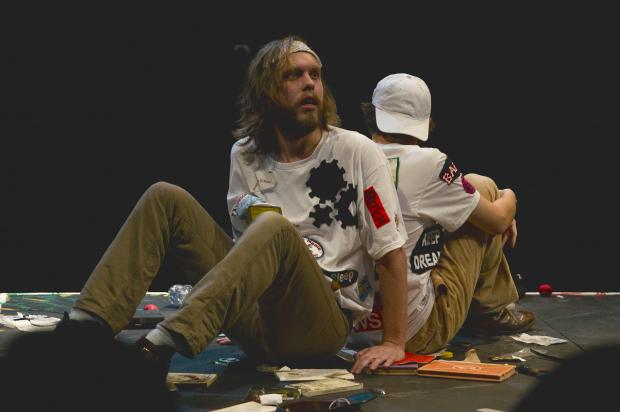 ‘Fight Night’ and ‘The 4-H Club’ revel in absurd comedy.

In Fight Night, actors competed against each other with unscripted results; in The 4-H Club, a masked man sat in the audience as red balls fell from above. Throughout the evening, Motyer-Fancy Theatre’s presentation of two one-act plays was shocking, confusing, but overall fun and entertaining.

Fight Night, directed by drama student Ian McMullen, is a devised piece, meaning that the script is created through collaborative activities between the director and the actors. The play follows the relationships between four friends – played by Madison Fairweather, Grace McAvinue, Emily Preeper, and Tristan Grant – each with a competitive side.

Throughout the show, conflicts between characters were represented by live games, played by the actors and mediated by a referee (played by Cassidy Gaudet). Each character had a monologue, for example, during which they would try to catch candies in their mouths as thrown to them by the referee.

Actors earned points for their successes throughout the show, leading up to a climax in which the top two would play a game of Twister. The winning actor’s character would receive the grand prize: a bursary which would allow them to go to university and, ultimately, leave the other three behind.

The show was fascinating in that the games were not rehearsed – one can’t exactly rely on catching four out of five candies every night, after all – meaning that the winner is different every time. When I saw the show, Gremlin (Preeper) defeated Cobra (McAvinue) in the final round, but one could theoretically see the show three times and witness three different endings.

The play’s costumes were simple but reflective of the characters’ personalities, and the punk rock music played during games added an energizing and dramatic touch to the performance. However, character development was slightly lacking, and it was sometimes difficult to understand the characters’ motivations in the midst of all the action. Overall, Fight Night was an incredibly entertaining show with an excellent balance between scripted events and improvisation.

After an intermission came The 4-H Club, written by Sam Shepard and directed by drama student Sam White. This play was completely absurd from start to finish; there was no clear plot or character development, and as I left the theatre I could hear fellow audience members muttering to each other, trying to figure out exactly what they had just witnessed.

This lack of clarity, however, was what made the play so enjoyable. From start to finish, nothing made sense. A group of masked figures appeared on stage every so often to give actors their props. One of them, wearing a headpiece made from several creepy-looking masks, sat with a portion of the audience in the front row. One of his masks, with a nightmarish clown face, was at the perfect angle to stare at me ominously the whole time.

Garbage was strewn all over the stage. Dozens of red balls of different sizes, representing apples, gradually fell from the catwalk and bounced off the stage floor, startling the audience. Voiceovers, provided by Josh MacDougall, started out comically as a type of cheesy radio announcement, but quickly escalated into overlapping, echoing voices.

All of these elements created discomfort – not only for the characters, but for the audience as well. What the audience experienced, however, was a more desirable or cathartic discomfort, similar to watching a psychological horror film. But the script also contained some humourous and light-hearted moments, and the three main actors – Jake Planinc, Gabriel Moreno, and Grant Mathias – did a great job at balancing these alternating moments of humour and discomfort.

At first, The 4-H Club’s lack of clear plot or characters was unpleasant and confusing. But once the audience realized that they weren’t supposed to understand what was going on, they were able to enjoy the other theatrical elements, including the exciting use of costumes, props, and audio to garner an emotional reaction.