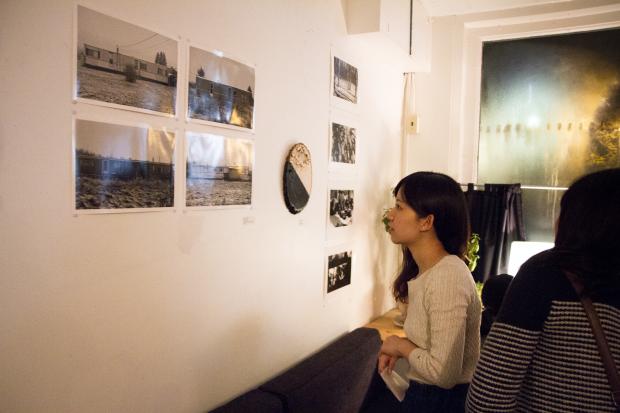 Although “The Purest Lie” at Thunder & Lightning may appear simplistic at first glance, upon closer inspection its scope and message are evident and gripping.

The exhibition, featuring the works of Emma Hoch, Alison Willms, Anna Cai, and Nicole Smith, explores elements of nature which have been impacted by human development. The result is a collection of works which seem to blend into one another, focusing on the transition from idyllic nature scenes to those disturbed by human presence.

Curated by Lily Scales, Emma Culberson, and Catherine Leblanc, the exhibition began as a final project for their seminar on curation. It is clear that the show was largely a collaborative process, and it is evident that much thought went into the selection of the works on display.

“We […] were interested in creating a show which was accessible and relatable to not only students at Mount Allison, but also members of the Sackville community,” said Scales. “After much brainstorming, we were able to arrange our ideas into creating a show with the central theme of depicting nature in its transitional states.”

A piece by Willms, entitled Ritual, consists of multiple images of a female figure overlapping with one another, giving a ghost-like effect to the subject as she transitions through various poses. In exploring the idea of ritual, the piece speaks to the notion of finding peace and sanctuary amid a world of impermanence and change. According to Willms, it became “about placing someone else in my special place of peace and putting them through all my devotional rituals, and seeing how new and strange it was to them.”

It is easy, in some ways, to notice similar themes in the other works. One piece by Anna Cai, called The Life Circle of Trees, features four black and white photographs arranged in a vertical line. As the title suggests, the images depict the stages of trees being turned into firewood and then burned. The simplistic, yet highly effective linear transitions show the progression from life to non-life.

“We wanted to show how we as humans change and manipulate our environment and use our natural resources, without much consideration of how our actions will play out in the future,” said Scales.

A work by Emma Hoch, entitled What is here, similarly consists of four black and white images with each photo featuring a trailer home surrounded by sparse grass, and some with trees or power lines in the background.

“I am interested in everyday things that have become uninteresting and unnoticeable in our society,” said Hoch. “Close observation of what is actually around me forces me to see the arbitrary line between the familiar and the unfamiliar.” The show, featuring the natural world, invokes the way in which human presence can be intrusive and destructive.

Clearly, the natural world holds significance and inspiration for the artists involved. All of the works hold a sense of sacredness and sanctuary associated with nature. Nature, as the exhibition suggests, offers an escape from our busy and industrialized world.

For Nicole Smith, the owner of Sackville’s Eudora Day Spa & Wellness Studio, art also functions as a means of escape, providing her with an outlet for self-expression and pleasure.

“Creating artwork is a wonderful way to give back to myself and have a bit of an escape from the world,” said Smith.

For Lily Scales and her fellow curators, the process was a challenging yet rewarding experience. “In the end, we created an exhibit we’re all really proud of, and it’s definitely something we’re looking forward to doing again in the future,” said Scales.