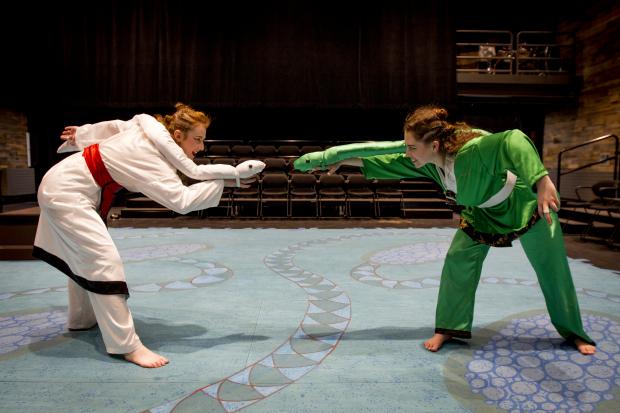 Between the beautiful costumes, minimalist set and skilled storytelling, Crake Drama Fellow Andrea Boyd and several Mount Allison students teamed up to create a fantastic production of The White Snake at the Motyer Fancy Theatre.

The play, written by Mary Zimmerman and adapted from a Chinese legend, tells the story of a snake spirit named White Snake (played by Kendrick Haunt.) Disguised as a beautiful young woman and adopting the pseudonym of Bai Suzhen, she and her friend Green Snake (Kelsey Otto) decide to visit the mortal world. There, White Snake meets a young man named Xu Xian (Erik Garf), and the two immediately fall in love.

The most interesting and unique element of the performance was the use of a large white sheet to create several visual effects. The show opened with nothing on stage except for this sheet hanging from the catwalk above in a cone formation.

The sheet, handled by several ensemble members at a time, represented something completely different in each scene. Sometimes it was a mass of clouds over which the snake spirits walked, while at other times it represented the harsh storm at the story’s climax.

In each scenario, the actors operated the sheet in a very precise yet graceful way. The simplicity and elegance of its use only added to the play’s visual appeal and reinforced the time period of the story.

Other set pieces were also minimalist in nature and would be moved on and offstage in between scenes. These included a small bed, a pharmaceutical counter, and simple chairs and tea sets. The minimalist set was pleasing to the eye but allowed the audience to focus on the characters and dialogue without distraction.

This type of set allowed the audience to seat themselves against all four walls of the theatre, meaning that different people saw the show from many angles and perspectives. The final scene took full advantage of this arrangement; the large sheet acted as a barrier, dividing the stage into two halves with actors performing on each side. Regardless of where one was seated, audience members could observe Haunt, Garf and other actors either directly or as silhouettes from the opposite side of the sheet.

The diverse costumes also reinforced the play’s unique aesthetic. Intricate details in each costume demonstrated the level of thought and attention on the part of their designer, Decima Mitchell. The ensemble actors had base costumes which resembled simple Chinese villager outfits, to which hats, masks, or fake beards were added. Liam Cole, playing the villain Fa Hai, also sported a traditional Buddhist monk’s robe and a shaved head to match.

In addition, the snake spirits wore elegant silk robes with colour schemes to match their names: Haunt’s robes were white and red while Otto’s were green and gold. They also each wore a snake puppet around their neck and along their arms when they were in their non-human form.

The production also featured great sound and music elements, which   effectively supplemented the visuals and the story itself. Percussion work by Presley Hynes and Dael Taekema, and choral singing from the ensemble, created authentic music which elevated the scenes and added another dimension to the storytelling aspect of the play.

Overall, The White Snake was a unique and highly enjoyable show. The costumes, the set and the actors themselves came together to tell an epic love story which resulted in a performance that was both emotionally and aesthetically pleasing.