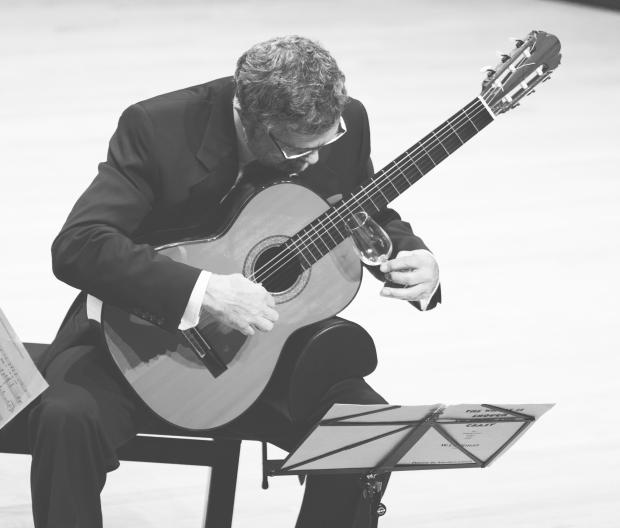 An evening of Canadian compositions.

The recital featured some of Beckwith’s newest pieces, including his first solo guitar composition, “Ut re mi fa sol la,” written in 2013. The title is a reference to the solfège, a musical interval derived from an eleventh-century Latin hymn that survives today as the iconic scale ‘do-re-mi- fa-so-la-ti-do.’ Beckwith’s piece returns to the origins of this instructional method by exploring six “hexachord fantasies,” which the program describes as “instrumental pieces in which a six-note scale appears as a ‘ground.’” Beckwith himself was present at the recital, and was acknowledged several times throughout the evening by the performers. Beckwith was also invited on stage later in the evening to receive audience recognition for his compositions.

The evening’s program exclusively featured instructors from Mt. A’s Department of Music. The performers were Peter Higham, guitar; Helen Pridmore, voice; Danise Ferguson, cello; James Kalyn, clarinet; and Gary Tucker, acting as the narrator in the final piece of the evening. They played six pieces in total: some were composed by Beckwith, and the rest by Canadian composers W. L. Altman, Omar Daniel, Michael Parker and Kevin Morse, who also teaches composition at Mount Allison.

The recital opened with a performance of Morse’s “Before the sun rises,” written in 2012 for bass clarinet and guitar. As Morse noted, the piece explored and presented “some of the conflicting feelings that comes with the approaching end of a journey or of life.”

The piece took the audience on an emotional journey, guiding them through varying levels of intensity, tempos, and moods, and finally ending with quiet peace. This particular performance was dedicated to the late Ron Boorne, a professor emeritus at Mount Allison who passed away last June.

W. L. Altman’s “The Whole is enough to drive you crazy” was a dramatic and theatrical performance, and the piece itself is a musical extrapolation of the poem of the same name by Marilyn Lerch, Sackville’s poet laureate. Lerch recited the poem immediately prior to the performance, ensuring that the audience understood the context of the piece. The piece featured female voice, guitar, cello, and the faint sound of wind chimes. Pridmore provided the voice in the piece not just with singing, but with other various vocalizations, like stuttering and animal- like sounds, to narrate the mood of the poem. Both the poem and the performance made reference to psychiatric hospitals, and the different vocal and string techniques helped to illustrate this theme of “madness” throughout.

The evening concluded with a performance of Michael Parker’s “The Grey Islands,” inspired by John Steffler’s prose and lyrical works. Narrated by Gary Tucker and once again featuring the voice of Helen Pridmore, the piece tells the story of a man who leaves the mainland to retreat to a deserted island off the Newfoundland coast.

Alternating between narration and vocal performance, Tucker and Pridmore were accompanied by clarinet and guitar as they iterated evocative lyrics: “I thought I was headed for silence/the unfamiliarity of the sounds of the sea/in this space and solitude.”The intensity of the piece shifted with the mood of the words being spoken. At some points, the music and narration were solemn and dramatic, only to be immediately followed by a comedic section and whimsical, cheery background music.

Beckwith has created more than 150 compositions, including orchestral, choral, chamber, and solo pieces. He began teaching at U of T in 1952, was Dean of Faculty from 1970-1977, and was the founding director of the Institute for Canadian Music in 1985 at U of T. Beckwith was made a Member of the Order of Canada in 1987.