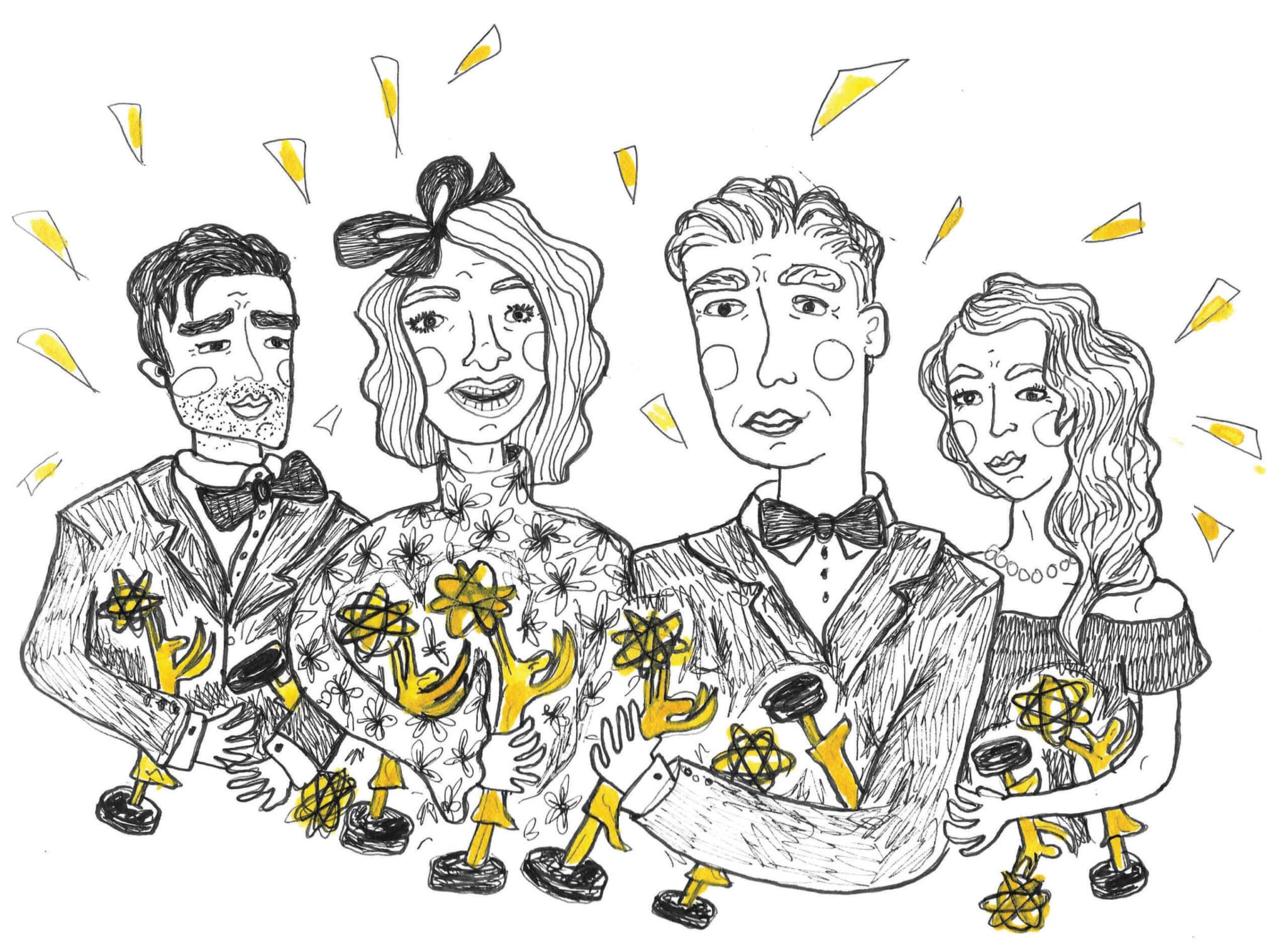 In a surprise turn of events, the final season of Schitt’s Creek’s broke records for winning nine awards overall–sweeping the majority of the comedy categories. These included all four comedic acting categories, writing, and best series, against popular favourites such as The Good Place and Dead To Me. This is Catherine O’ Hara, Eugene Levy, and Annie Murphy’s first Emmy wins. It also marked a record-breaking four awards in a single night for Dan Levy, who won for acting, directing, writing, and best series, with the final shared with his father, co-creator Eugene. It also marked a win for Canadian television talent, as the CBC-born show is filmed entirely in Ontario, with a mostly Canadian cast and crew.

For some who tuned in, however, it was a question of what exactly Schitt’s Creek is and why it swept. The show isn’t as popular as past Emmy giants such as Modern Family, Game of Thrones, and Mad Men. The premise doesn’t seem particularly interesting either—a rich, self-absorbed family loses their money and are forced to live in a small town. It seems like a show that should be annoying and unrelatable, but the show’s audience grew with each season. The show especially grew in popularity when it hit Netflix after its third season, opening it up to a wide international audience that soon joined Canadian and American fans.  Schitt’s Creek’s growth has been remarkable, from simple water cooler talk based on the hilarity of the name to important discussions made more accessible through the show’s story arcs that touch the hearts of many.

The themes of family extend from the fictional Rose family to reality, with the fact that show runners and stars of the show, Eugene and Dan Levy, are father and son, while Sarah Levy, Dan’s sister, also plays a minor character.This is not the first time Eugene and Catherine O’Hara have worked together: the matriarch and patriarch of Schitt’s Creek’s Rose family have been working together for forty years of comedy bliss. It also shouldn’t go unnoticed that Annie Murphy, who won her Emmy for her portrayal of Alexis, and Emily Hampshire, who plays series regular Stevie, were considering quitting acting before landing their roles on Schitt’s Creek.

Schitt’s Creek really is the perfect show in times when we truly don’t know what’s happening next. In a world of uncertainty and new issues every single day, Schitt’s Creek is a safe haven. It tells stories of acceptance in its beautiful coming out episode while never making it feel forced. The episodes are short and easily binged, with stakes that feel real. Every issue, whether simply for a comedy punchline or for a larger arc, feels difficult and real and human—and yet, you always know that the characters are going to be taken care of. Dan Levy has said in interviews in the past that there is never prejudice in Schitt’s Creek. Although it is a small town, they never disrespect someone on the basis of sexuality, gender, race, or class. They’ll poke fun and tease, but it’s never serious. It is extremely rare to find representation of minorities without some struggle against society and acceptance, or without it becoming their only identity marker. For the minorities of Schitt’s Creek, their struggles are mostly internal, and the town forms a community to support them through it. There’s comfort and safety to the show, and that’s something we need more than ever.

For all the strides in acceptance and representation in the show, it cannot go unnoticed that the majority of the cast is white. There are very few people of colour in the show, and they are usually relegated to background roles. It would be remiss to mention that the other big winner of the night, HBO’s Succession, is also a show that revolves around the issues of rich white people. While there were some wins for BIPOC talent this year, such as Ron Cephas Jones and his daughter Jasmine Cephas Jones, Zendaya and Uzo Aduba’s wins, it seems minuscule compared to the sweeps from these white-led shows. It’s a shame, as these wins also broke records, with Zendaya becoming the youngest to win best lead actress in a drama and the Cephas Jones’ becoming the first father-daughter pair to win Emmys in the same season. These should be celebrated, and while there is definitely coverage, it can get lost in an Emmys that was record-breaking for so many reasons. Additionally, even in semblances of diversity, there are still plenty of issues. FX’s POSE, for instance, is groundbreaking in its portrayal of intersectional LGBTQ BIPOC lives in the ballroom scene of the 1980s. Last year, it was celebrated for Billy Porter’s win, making him the first gay black man to win an Emmy. However, it must be noted that he—who was also the only member of his cast nominated this year—is pratically the only cisgender cast member. This particularly stings with the knowledge that POSE broke records for number of transgender series regulars cast, and yet none of them have been celebrated.

Although this year’s Emmys ceremony has made strides towards diversity in those awarded and this recent sweep has a major impact for Canadian television, going forward there is clearly still a lot to learn.