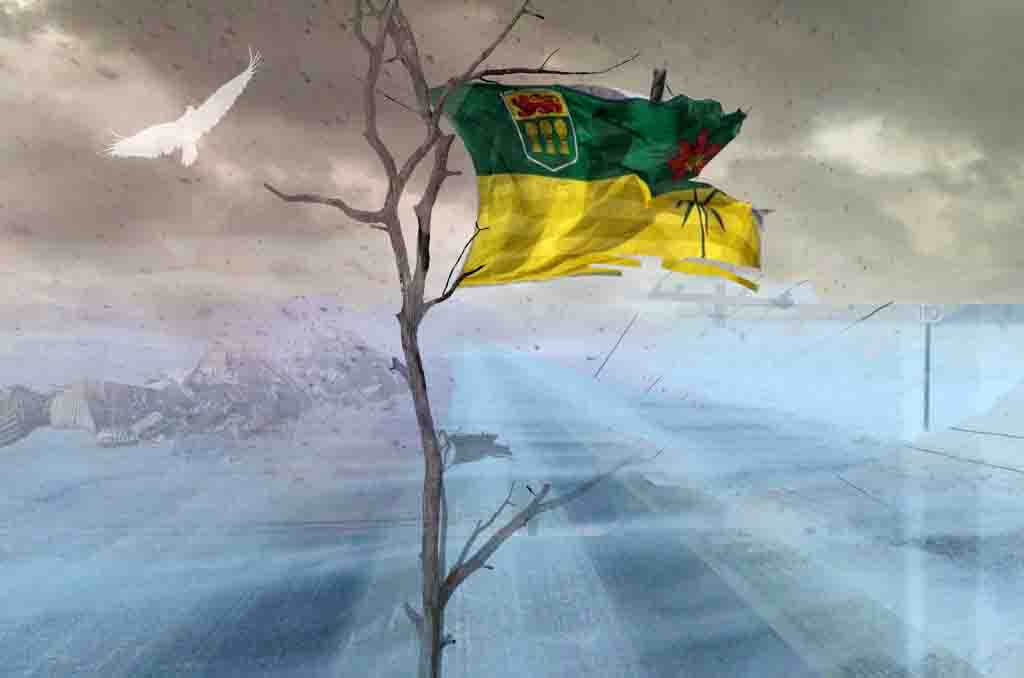 Set in a bunker in the radioactive wasteland once called Saskatchewan, Jena McLean’s directorial debut explores themes of group power dynamics and the conflict between pragmatism and idealism. In the words of Gabrielle Gagnon, who plays Freddie, “Four people adjust to a post-apocalyptic wasteland and they try to figure out the best way to survive.” The play also addresses questions about whether a despondent life is worth living. Lou van Aardt, who plays Pluto, said about life in the bunker, “Is this survival or is this living? What does it mean if you die surrounded by empty bean cans?”

In the play, newcomer Iris disrupts the unstable equilibrium of Freddie, Luther and Pluto. According to Gillian Kiessling, the actress who plays Iris, “[the play is] confrontational. There are three people [surviving], but Iris disrupts that totally.” Iris is promptly taken hostage and Luther sets out to locate and recover her car. The car brings to the group the hope of escape for the first time in months, which serves as a catalyst for the main events of the play.

Ice land exhibits rapid changes of emotional atmosphere. A tense, confrontational scene featuring Luther and Freddie, guns drawn and locked in a standoff, quickly gives way to a scene in which Luther and Iris discuss their favourite Canadian of all time. A tattered Canadian flag is present throughout the play upstage; it highlights the theme of the meaning of nationalism in the absence of government and order. When society has all but fallen apart, the play forces the audience to consider what it means to maintain one’s humanity.

Originally, the script called for three of the four actors to be cast as men. McLean and stage manager Dana Bidgood, however, came into the process with the intention of implementing gender-blind casting and assembling the group with the best chemistry. “Relationships are so important to every show, but especially this show. So I wanted people who can work together and survive this process together. And they bonded so quickly,” said Bidgood.

“The second I finished reading it, I thought, ‘I have to do this play,’ ” said McLean on her process of choosing a play for her independent study. “It’s so raw and so relevant to the current political situation.” In a world embroiled in conflict and poised for worse things to come, ice land brings to life a dark vision of the future. “Right now is a really weird moment in history,” said McLean. She aimed to capture that idea in her choice of play. She said, “I want audiences to come away and think ‘How is that not our future?’”

Though the medium of a one-act play was prescribed in the parameters of McLean’s independent study, the cast and crew seemed fond of the medium. “It’s short, it’s quick and you get these really interesting developed characters,” said McLean. “And they still have time to develop on stage,” added Bidgood.

All in all, the play promises to be a powerhouse on stage, in terms of its narrative, acting and technical coordination. The opening night was on March 21 and the closing night will be on March 24. Tickets cost $5, and $3 for students and seniors. Be sure to catch the show at 8 p.m. in the Motyer-Fancy Theatre!