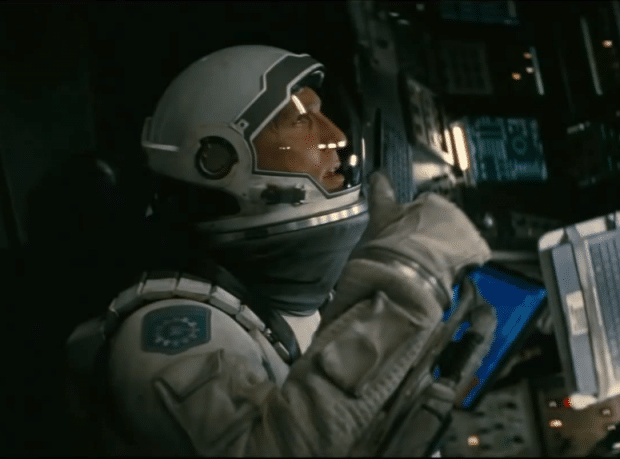 Nolan’s sci-fi is dazzling yet shallow.

Interstellar is sure to be one of the biggest box-office draws of the year and a probable Oscar nominee. As you’d expect, Christopher Nolan’s effects team does stunning work, advancing classic images and tropes of science fiction into a new era. Nolan has attempted to make a sort of 2001: A Space Odyssey for this generation.

Despite its many stunning visuals, the plot becomes tiresome and takes much too long to get from one event to the next. Interstellar is an imaginative movie, but a heavy-handed mix of personal tragedy and theoretical physics doesn’t leave much room for subtle storytelling. Interstellar boasts performances from big names, but in our image-saturated age, in which mind-blowing visuals become expected, the film doesn’t quite inspire our awe in the way Kubrick did.

The movie opens with a series of documentary-style interviews which seem to be about the Dust Bowl of the ‘30s. However, we quickly discover that this is a drought yet to come. Somewhere in the not-too-distant future, Earth has been ravaged by an environmental disaster. Former NASA pilot Cooper (Matthew McConaughey), a widowed father of two, is now a farmer tasked with growing one of the planet’s last remaining sustainable crops: corn (suggesting that Nolan has either a great sense of irony or none at all). The NASA for which he once flew, believed to have long been disbanded, has in fact gone underground. As Cooper soon discovers, scientists, including a professor named Brand (Michael Caine), have been working for years to find humans a new home on a distant planet. Coop is asked to pilot the mission along with Brand’s daughter Amelia (Hathaway), an astrophysicist (David Gyasi), a geographer (Wes Bentley), and a pair of robots.

This is not a movie about saving Earth. Cooper himself makes it very clear that “we’re not meant to save the world. We’re meant to leave it.” In a film that runs almost three hours, Nolan devotes mere seconds to Cooper’s decision to abandon his family. Interstellar rushes to blast off so Cooper can search for humanity’s next planetary home. Obviously, the space mission is what we came for, and Nolan clearly makes that his priority.

The main obstacle that Cooper and his fellows must overcome is time itself. What hours are to the crew members are years back on Earth. The longer they take to get answers, the older their loved ones will get. In any case, Interstellar is quite adamant that however many dimensions may exist, love trumps them all. Love, we are shown, is “the one thing that transcends time and space.”

Despite its shortcomings, Interstellar is a movie worth seeing. What Nolan lacks in intellectual and emotional depth, he makes up for in his truly remarkable visual conception of deep space. At his best, he makes the viewer believe that the worlds he’s inventing have no end, and that time and space truly are as manipulable as he claims. Yes, it may be tedious at times and absurd at others. But the scope and ambition of Nolan’s vision are refreshing in this era of safe bets, sequels, spinoffs, and franchise-hopefuls.