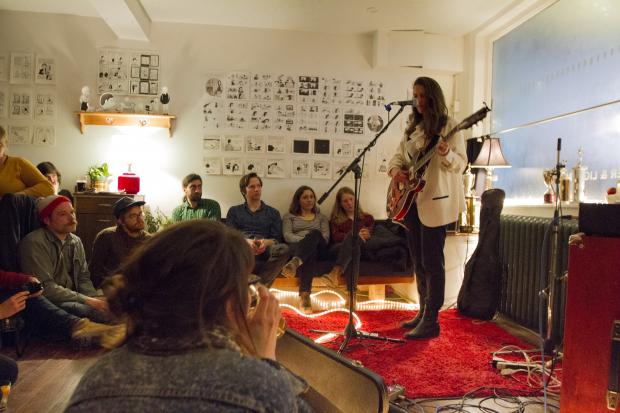 After Jon McKiel left the stage in a warmly lit Thunder & Lightning, Jennifer Castle, sporting a smoking jacket and ruffled shirt, stepped up to the mic. Opening with a traditional folk ballad a cappella, the audience quickly grew quiet, eager to take in the performance.

Organized by SappyFest in collaboration with T&L, Castle performed an intimate living-room style show last Friday night. Promoting her most recent record Pink City and having performed at SappyFest in years past, Castle drove herself and her guitar the seventeen hours from Toronto to perform a handful of shows in the Maritimes.

Though her album is full of additional instruments and backing vocals, Castle performed at T&L with only a guitar. The stripped back feel of the performance allowed her to truly showcase her enchanting voice and expertise as a guitarist. With vocals reminiscent of Dolly Parton with the edginess of Stevie Nicks, Castle’s style combines elements of the 70s and contemporary indie folk with songwriting that has been compared to the likes of Neko Case and Joni Mitchell.

Performances of “Sailing Away” and “Sparta” embodied the folk-country sound in a way that made the audience feel as if they were driving in the country with the windows down. Other songs gave off a much more somber vibe, relying on shaky bluesy vocals that filled the small venue.

The informal and cozy atmosphere of the performance meant concertgoers were seated on the floor at the foot of the makeshift stage, at the bar, and every available space in between. A drastic change from the bowling alley shows, Castle’s performance was a Sackville experience at its finest.