Letting the other lips do the talking 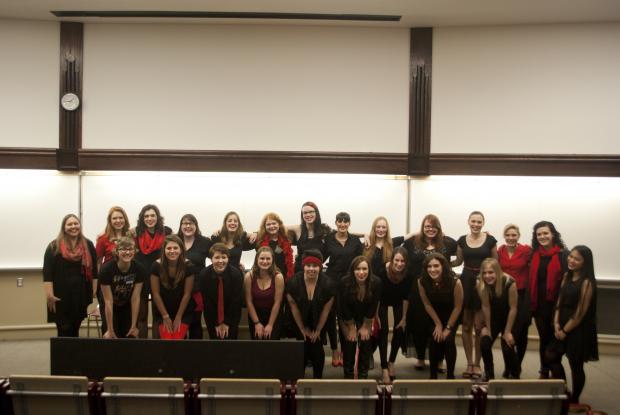 Once again, Mount Allison University proudly brought the critically acclaimed Vagina Monologues to campus. Partnering with V-Day, an annual campaign to end violence and injustice against women around the world, The Vagina Monologues by Eve Ensler packs a clever, humorous, and emotional message. The show’s central message aims to empower individuals who identify as women through a combination of self acceptance, self exploration, and intolerance for oppression and abuse. This year’s production was directed co-operatively by Dez Nacario and Evelyn Wainewright, whose talents and experiences blended effectively to deliver a stunning performance through the cast.

The cast this year was a healthy mix of new and old faces. Some of the newcomers were individuals who hadn’t even seen the production, and their performance constituted their first introduction to the production. Some, like Piper Riley Thompson, were drawn to it out of pure curiosity.

“It was interesting to see how many people were really excited to be involved with the production,” Nacario said, “some were nervous at first, but they were all excited about the production by the end.” Many of the returning cast took on new roles this year, creating a sense of diversity for both the actor and the viewers.

Anna Duncan, a third-year Vagina Monologues veteran, took on the challenging role of a seventy-two year old woman struggling to express her sexual identity. “In my first year I had a funny role, then in my second a serious one,” Duncan said, “it was nice to have a role that combined the two.”

The Vagina Monologues have always been a wonderful balance of humour and graveness. Funny monologues are often employed to ease the tension and apprehension behind encouraging women to explore their sexuality and their anatomy more intimately. It was interesting to watch the audience turn from nervous laughs to full joy during the yelling of the word ‘cunt’ as apprehension turned to amusement and laughter. The laughter is mostly mediated by the fantastic energy and acting of the performers, as they boldly and bravely tackle the show’s intentional humour without trivializing the issues the monologues are trying to highlight. Some of the more serious monologues added a severe tone to the production, demonstrating the darker side of female sexuality. The injustice, abuse, and inequality is played with emotional vigour in the monologues, and really plucks at the heart of the issue. Coupled with the fact that many of the emotional monologues are real life testimonials and The Vagina Monologues is able to conjure compassion and empathy for the issues it highlights.

This year’s production features not only new actors, but also a new concluding monologue. In previous years, the show’s final monologue was the standing statistics sequence, but this year, the new monologue, “Spotlight,” describes a dream detailing justice through rehabilitation.

While no men were involved in the performance, as only individuals identifying as female are permitted to perform, some men were involved as directors for the performance. “We feel its important for men to be involved. Their co-operation goes a long way to seeing violence against women ended,” Nacario said. One of the goals of V-Day is their 1 Billion Rising campaign, a call to vocalize the global estimate of female abuse victims. The Vagina Monologues goes a long way to generating these voices, and after seeing it I can say that this writer will definitely be one of them.