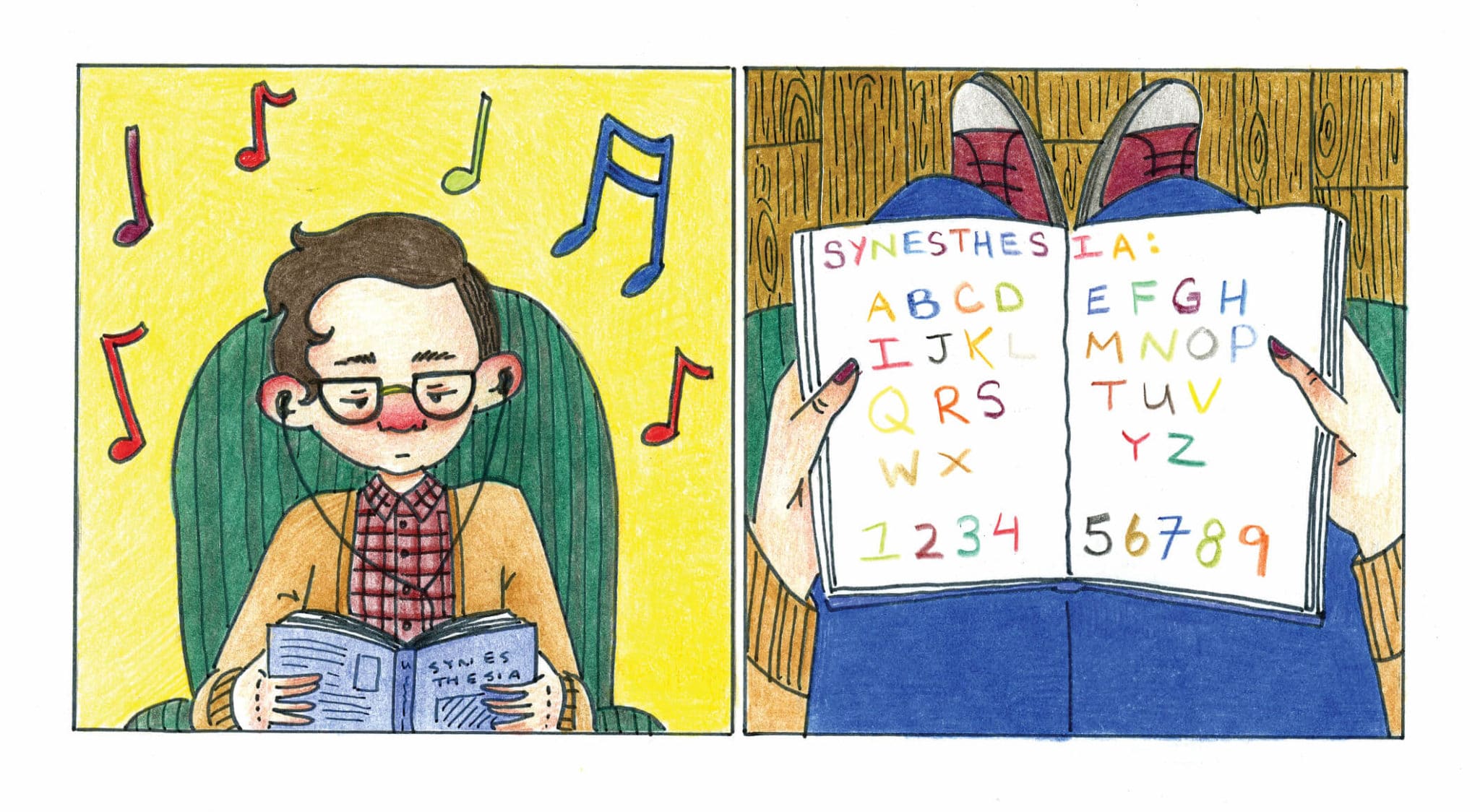 How synaesthesia can affect students and their perceptions of reality

As human beings, we rely on our senses to take in information about the world that surrounds us. Our senses play an active and constant role in our lives from the day we are born and are our only source of information before we learn a language. These senses are generally used by the human brain as five distinct ways of absorbing information. However, these senses that usually act individually can, for certain people, fuse together. These people have a neurological genetic trait called synesthesia.

According to Dr. Richard E. Cytowic and Dr. David M. Eagleman in their book Wednesday is Indigo Blue, synesthesia can present itself in over one hundred different forms, each of which alter an individual’s perception of the world in different ways. The most common of these forms is chromesthesia, in which visions of colour can be experienced when hearing sounds. Some see these colours displayed in front of them like a projection on a movie screen, while some with a lesser degree of synesthesia will describe seeing these colours in their mind’s eye. People with chromesthesia might see colours when listening to music, hearing the tone of someone’s voice or even hearing sirens in the street.

Mount Allison student Braelyn Schultz presents with five different types of synesthesia, which incorporate four of her five main senses. Perhaps one of the most unique forms of her condition is called ordinal linguistic personification. People with this rare type of synesthesia will associate a personality with parts of an ordered sequence. For Schultz, this is most prominent with numbers. “The number eight to me is this motherly figure who is really sweet and number nine is a sickly old man,” she said. “They’re not all archetypal people but they each have a gender and personality.” Others with this type of synesthesia might associate a personality with months of the year or the four seasons.

Another type of synesthesia that Schultz experiences is called mirror-touch synesthesia. This causes individuals to feel a sensation on their body as they see events happening to someone else. After seeing someone fall off their bike and skin their knee, synesthetes with mirror-touch will have tactile response. They might feel a pain in their own body or a temperature like a hot or cold sensation.

One type of synesthesia that does not affect Schultz is lexical-gustatory synesthesia. This type of synesthesia causes people to experience tastes and smells based on what they are hearing. What’s interesting here is that synesthetes often associate a word’s sound with its taste. For instance, a person might hear a word like “please” and associate that with the taste of cheese or hear the name Tony and taste macaroni.

Synesthesia typically isn’t seen as a hindrance by those who experience it, but more as something that makes them unique. In fact, being a synesthete has its perks. “I am able to memorize things differently,” Schultz said. “I can draw connections between things that others normally can’t. For instance, when I’m studying, I can associate the professor saying a word and then I can see that colour.”

Synesthesia is usually not a trait that poses a disadvantage for learning, but rather a way for people to have a nuanced experience in their academics and in general.

“Grapheme-colour shapes math and memorization, because I tend to add colours instead of numbers – blue 2 + red 3 = green 5, and if I need to remember something, I remember colours more than words,” said Kathryn Pare, another Mt. A student with synesthesia.

If you think you might be a synesthete or are interested in finding out more, Julia Simner’s research is a great place to start!