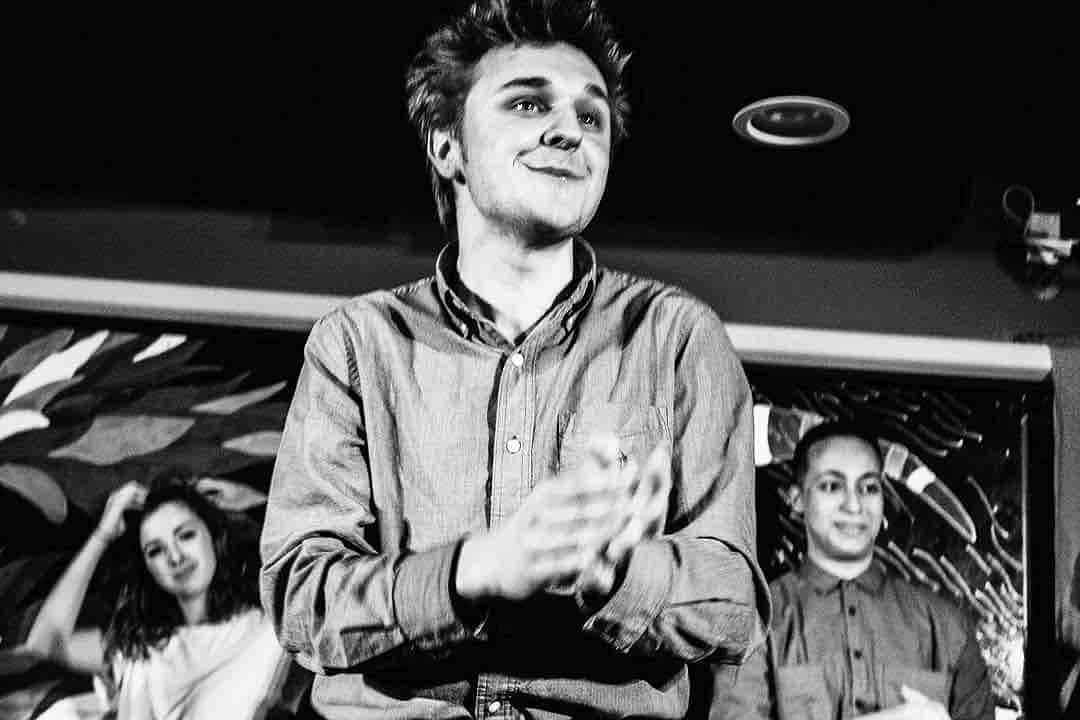 Erik Garf wants “to do something new with improv.” Through the direction of No Misstakes, an improvised take on university life, the fourth-year drama student is doing just that.

I sat down with Garf to learn more about the show and what led him to it. Given his early introduction to theatre through improv, No Misstakes is a no-brainer for his directorial debut. After attending improv club because his friend needed a drive home, Garf fell in love with the genre.

Improv, plays and musicals have taught him “how to open my mind and observe the world a lot better. Comedy, specifically improv, is observational and if you’re not paying attention to what’s happening around you, you don’t have enough material to improvise off of.”

At Mount Allison, Garf has been a prominent member of Motyer-Fancy, appearing onstage in She Stoops to Conquer, The White Snake, How to Succeed in Business Without Really Trying, The Dumb Waiter and Unity (1918).

“I’ve learned something different with every show I’ve been a part of,” said Garf. These lessons include memorization, articulation, playing the moment, dancing, singing and “how to walk offstage and shake it off.”

Garf has also been an active performer with Presents: the Improv. After joining Close Enough, one of Present’s three teams, in his second year and performing with the main stage cast in third year, he became the artistic director. He also currently performs with Critically Ashamed, another of the teams.

These passions for theatre and improv combine in No Misstakes. The idea for the show came from a Presents rehearsal at the end of his third year. He and three other performers jumped into a scene that mirrored real life.

“The issues that we were personally dealing with came out, which made us connect with it, connect with the moments, and we were grounded. Humour came out of it, and it was still funny, but we never tried to be funny. We just tried to make a story,” he explained.

This is his goal with No Misstakes: story, not comedy. Garf believes there is a place for Whose Line is it Anyway–style improv – based around earning the laugh – but he’s noticed “when an improviser tries to make a funny show, it breaks the reality of it.” Above all else, his goal is to “prove that improv can be more than it is in a pub.”

Playing off of the Harold structure – three independent plots that eventually come together to be resolved – the cast, as versions of themselves, improvises about problems they encounter in real life. They journal, take note of stage-worthy moments and events, and explore topics from the mundane to the heavy, like pregnancy, sexual assault and overdosing.

“There’s funny moments, but it can also be sad,” said actor Lily Falk when I sat in on a rehearsal. The focus on realistic narrative over comedy has pushed her “so much,” she says. “It feels way more vulnerable for a lot of reasons, because you’re playing yourself, a version of yourself.”

Max Farella, a Presents member and an actor in No Misstakes, added that “it’s tough switching between the two, from Presents to this and back to Presents. It’s like writing for a different discipline.”

The actors are not the only ones who are pushing their comfort zones. The design team will also improvise. Kylie Fox will provide musical commentary throughout the show, and Garf says that “the designers are going to have to be on their toes and helping them create whatever the actors are creating.” Lighting will be improvised and there will be “a huge rack of costumes” and “copious amounts of props.”

Garf hopes that this experiment with improv will “directly speak to the audience” above all else. “It’s about everything you could possibly experience at university,” he explained.

Catch ‘No Misstakes’ during Motyer-Fancy Theatre’s Evening of One-Acts, Nov. 22 to 25.