MASCARADE! Take your fill – Let the spectacle astound you! 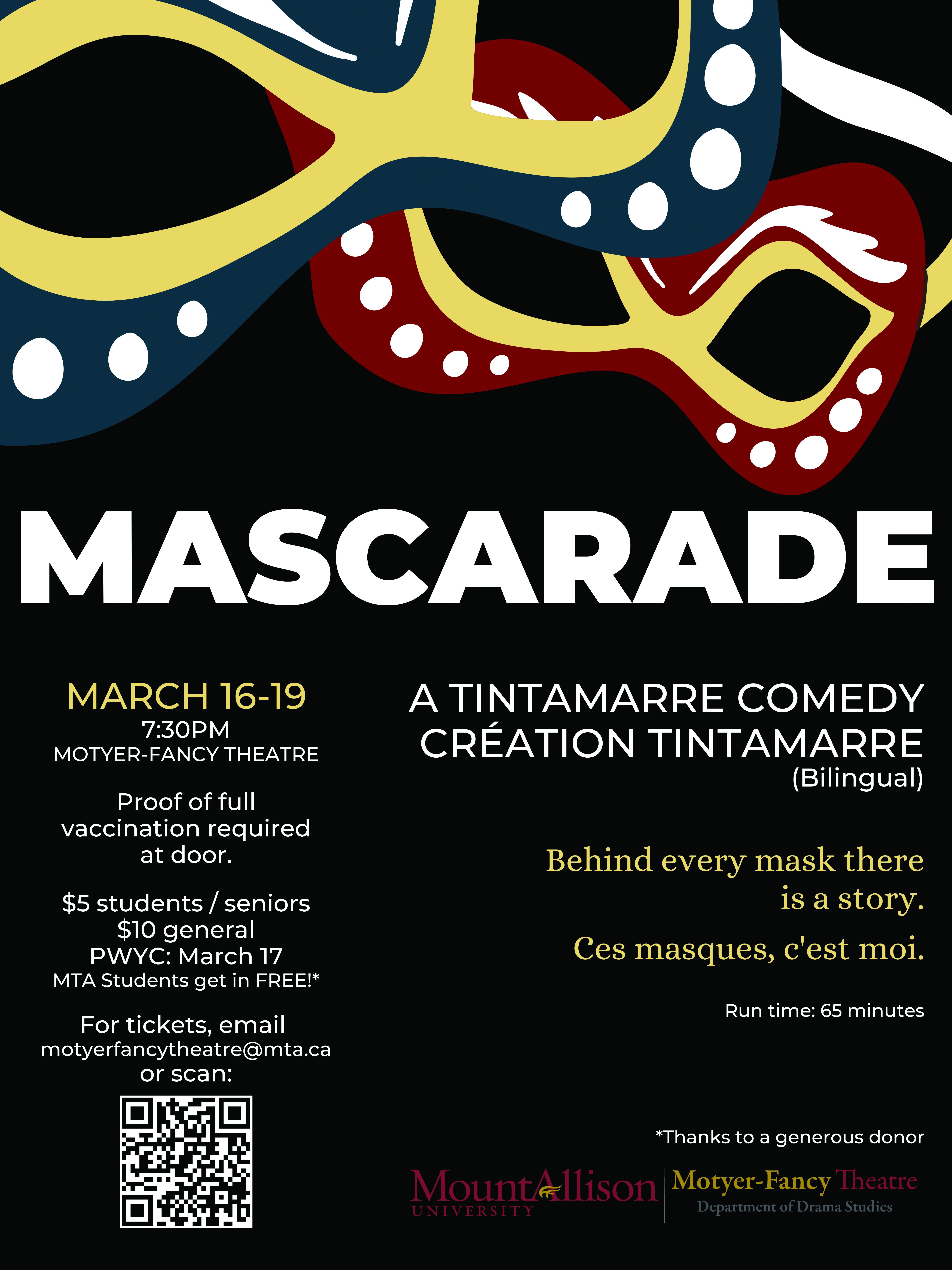 The creation and celebration of Tintamarre’s newest play

Tintamarre is the only bilingual theater troupe on campus and has a long history at Mt. A. Tintamarre began in the 1960s and has continued to make comedic and topical theater ever since its inception. Alex Fancy, the creator of Tintamarre and a prominent member of the Mt. A drama scene, now well into his 80s, has been running the group since its debut, an impressive feat. However, Tintamarre is not like any other theater troupe, it is instead a devised theater troupe. To begin with, they do not start with a script but rather an idea, and it is the students who create the play from there. “It truly is a collaborative process,” said Ashlyn Skater, a third-year drama major and the show’s stage manager. “We all brainstorm ideas for what we want the show to look like, and what kind of characters we want to see, and then Alex puts them together to create the script,” Skater continued.

When it came to writing the current play, the group focused on two general themes: social anxiety and the impact of COVID-19 (a continuing theme from last year’s production). The play centers around a frustrated director who is in search of a way to end her first play, her antisocial child who feels neglected and secluded from others, and a crew of actors each trying to deal with their own anxieties. “I think [the play] is really relevant to what we’ve been going through these past few years,” said Ben Hebert, a third-year philosophy major and one of the student directors for the play. “The social anxiety and chaos that we see throughout the play really reflect what has been going on. People feel isolated and anxious about returning to the way things were previously, and the world around us has only become more chaotic in recent times,” Hebert expressed.

Hebert explained the role of social anxiety, expressing that “all the characters have it,” but their ways of coping with their anxiety is what distinguishes them. In the play, there are three characters who are caricatures for methods of coping with anxiety; one keeps themselves excessively busy, another overcompensates for their insecurities by being utterly self-involved, and the third is deeply apologetic for even existing. Skater stated that “[t]heater creates perspectives that can resonate with different types of people. I think these characters, as well as MASCARADE as a whole, are indicative of this.” While everyone may not experience social anxiety to the same extent, or cope with it in the same ways as these characters, there is something in the show for everyone to relate to.

When asked about what it will be like to return to in-person theater again, Hebert expressed nothing but excitement and relief. According to Hebert, the show was originally supposed to be staged in early February; however, the continuing presence of omicron cases meant the show kept getting pushed back. “There was a lot of uncertainty of whether [MASCARADE] would go on at all,” Hebert stated. “My mindset was let’s just enjoy ourselves with what we can do. It has been and will be a cathartic experience to do in-person theater again; it has become something that we, as a cast, celebrate, and I think that’s reflected in the play,” he continued. Skater expanded on Hebert’s comments, expressing that there is an energy to live theater that is unparalleled. According to Skater, the audience is what makes the show.

Part of what makes this play so special is that it is as authentic as it is absurd. According to Hebert, life is absurd and Tintamarre revels in that fact and celebrates it, shown by the hyperbole in the characterization of the cast and the writing of the play. According to Skater and Hebert, it is grounded by the cast “because creating this play, and making it a reality was a team effort. I think everyone puts their heart and soul into it, […] as well as [making] their characters as real as they can be,” said Skater. Hebert’s opinion was in line with Skater’s; he expressed that once the actors get their characters, they “take it and run with it” to make the type of character they are interested in portraying. After seeing a brief preview of MASCARADE, I can whole-heartedly concur that in its absurdity, in a world where monsters do exist, the actors add a layer of realism and earnestness that will have every spectator on the edge of their seats.

Tintamarre’s newest show Mascarade will be performing in the Moyter-Fancy Theater from March 16 – March 19. According to Hebert, a large grant has been given to Tintamarre so students will get in for free during the show’s run. Make sure to reserve your seat and come and view this comedic and heartwarming production.