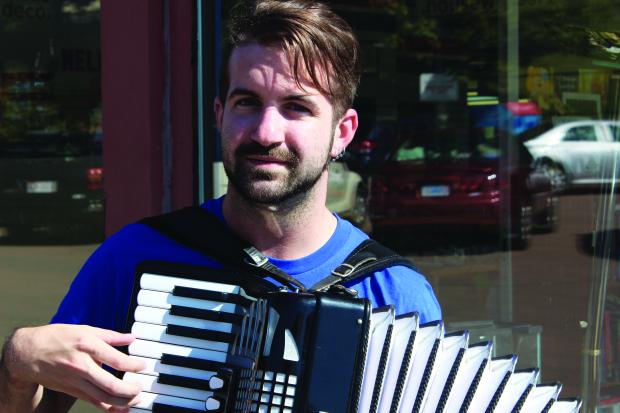 With files from Amanda Cormier.

Phil Chevarie recalls when he was first asked to perform for Culture Days in his first year. “They said, ‘Basically stand on the street and do something artsy for an hour.’ And I said, ‘I’ve got an accordion, so why not?’”

Chevarie’s primary instrument is the saxophone, which he studies in Mount Allison’s Bachelor of Music program. He started playing accordion 17 years ago when he started taking lessons, and he continues to play the instrument for a fun change in style and genre.

At Culture Days, Chevarie performed French style accordion pieces, and he even demonstrated his mastery of Polkas, Waltzes, and contemporary music. “In recent years, I’ve gotten into perverting pop music,” he said with a laugh, going on to play brief renditions of Lady Gaga’s “Bad Romance” and Bruno Mars’s “The Lazy Song.”

Lori Chen participated in Culture Days for her Arts and Culture Marketing course. Working with MASSIE students, Chen set up an origami workshop outside Scotiabank and showed passers-by how to make paper cranes, stars, and lanterns. “I think origami is interesting because it’s part of Asian cultures, and we’re out here actually showing people how to do it,” said Chen.

Chen commented on the community aspect of Culture Days and its ability to reach people in Sackville and all over the country. Because the event takes place in numerous locations across Canada during the same weekend, Culture Days encourages communication within and across various cultures. “I think it’s fascinating because it’s like cultural sharing,” said Chen. “We start talking about origami, but later we were having a lot of different conversations. I feel like [the event] makes people more curious about other people’s cultures.”

Xavier Gould, Alison Crosby, and Josh MacDougall, sought to publicly perform the process of producing a play. Using a scene from Tennessee Williams’s The Glass Menagerie, the trio of third-year drama students staged and rehearsed the play on the Main Street sidewalk. “We hadn’t worked on this scene whatsoever before the hour started,” said Crosby.

For those who were already familiar with theatre, passers-by could witness the process of building a scene and the challenges that actors face. “Our objective was to show people what it is to produce a play and the steps that go along with that,” said Gould. “It’s not all fun and games all the time, even though that’s a component of it; we got to show the deeper value of acting and how it can be difficult.”

Caroline Kovesi, a third-year sociology student, performed contemporary and improvisational solo dance outside SaveEasy. Kovesi used her body and expressive movements to interpret a number of songs being played electronically. “It’s all improvised,” said Kovesi. “Spontaneous is the best way to describe it.”

Kovesi has been dancing since fourth grade, and continues to actively pursue her passion for dance at Mount Allison. Although she performed contemporary dance at Culture Days, Kovesi also does jazz, lyrical, ballet, and hip hop styles, and is involved with Mt. A’s varsity dance groups.

For Kovesi, Culture Days provides an opportunity to demonstrate the visibility of the arts in Sackville. “It’s nice to show that community members have artistic talents and artistic ways of viewing the world,” she said. “It really immerses [Sackville] in the arts in a visible, tangible way.”

Outside Tidewater Books, Evan Furness showcased a selection of paintings and drawings that capture the natural themes of his artwork. In many of his works, Furness focuses on realistic representation of nature and animals. “I’m trying to make everything as accurate as possible to the original,” said Furness.

In addition, many of Furness’s pieces carry a distinctive political message. “I try to direct a lot of [my art] towards environmentalism,” said Furness. He responded to a drawing entitled Inhale, which depicts a smoke-spewing factory nestled inside a corncob pipe. “It’s entirely about pollution in our air system,” said Furness.

Furness said that Culture Days was valuable to him because it allowed him to show his art to the public. He also testified to the importance of public art, as he hopes that his striking visuals will stick with the viewer. “If you take to an image right away, it’s something that can grab you instantly,” said Furness. “Here’s what I have to say, you can choose to listen or not.”

With files from Amanda Cormier.