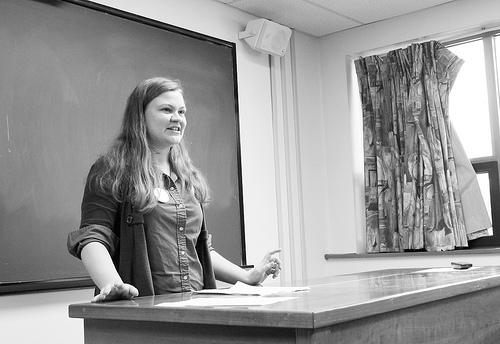 This past weekend marked the exciting opportunity for Mount Allison to host the Annual Atlantic Undergraduate English Conference. The three-day conference, which was organized by three Mt. A students, with the help of English Department Head Robert Lapp, provided the opportunity for undergraduate students from universities across Atlantic Canada to present their academic and creative writing in a community setting. The conference included a performance by FLiNT Improv Co., a keynote address by poets Don MacKay and Amanda Jernigan, and numerous presentations and panel discussions. Organizer Caroline Wong, along with Bernard Soubry and Karissa Larocque, began work on the conference in September of 2012. “As former participants in previous conferences, we each saw different aspects of the AAUEC—and conferences in general—that we liked, as well as areas for improvement,” said Wong. The diversity of their “triumvirate” was beneficial. Wong noted that “the plurality of our perspectives must have appealed to the English department.” The theme of plurality of thought was echoed through the group’s choice of keynote address. On Saturday morning, the conference welcomed Jernigan and MacKay. Each poet read from their works, Groundwork and Paradoxides, respectively. This reading was interspersed with discussion that set the tone for the entire conference. Conference presenter and Mt. A student Daniel Marcotte felt that the set-up of the keynote was intriguing: “They shared poems back and forth. It was like a discussion, but to an audience. That made it really interesting.” For Claire Molgat Laurin, another presenter, MacKay and Jernigan created a “nice, relaxed back-and-forth dialogue. The two of them really related well to one another.” She also found it inspiring, saying that “it made me want to go and check out more of MacKay’s poetry.” After finding that at previous conferences it was often difficult to take in as many presentations as was desired, the organizers made changes to the typical programme. “At previous conferences, we felt frustrated with the number of concurrent sessions…and the need to pick and choose which presentations to attend instead of being able to attend, and learn from, as many as possible,” explained Wong. This influenced the organizers’ idea to divide presentations and discussions into six sections of three panels that were related by theme. Marcotte found that this system was beneficial because it “facilitated the meeting of like-minded individuals.” For instance, Marcotte presented on Walt Whitman’s reshaping of the American idea of the self. Whitman borrowed from Eastern religions, specifically Hinduism, and in his session, there were two other authors who wrote poems related to Eastern religions. “It was very beneficial to get an understanding of my own writing and my own paper, because everyone brought their own thing to it. I hope that I did the same for them.” Molgat Laurin agreed Marcotte that communication with other students was the highlight of the conference. “I had some really interesting conversations with students at other schools, not only about their specific topics, but about the different approaches that their English programs have,” she explains. This type of communication is especially essential in a program like English, which is often very independent and personal. According to Marcotte, “events like this remind us that it’s not a personal experience. This is a community and we’re all here for the same reasons…It’s really hard to see that sometimes when you’re sitting in class or writing an essay.” For this conference, organizers tried to differ from previous conferences in specific ways. “Perhaps the biggest difference between the thirtieth AAUEC and this year’s session was our strong emphasis on the personal, the local, and the non-commercial,” says Wong. To create a more intimate atmosphere, the committee opted to provide billets for guests, as well as lodging at the Black Duck Inn. They held the annual AAUEC dinner at the Sackville Legion and invited guests to a performance by FliNT Improv Co., rather than a formal dinner and dance. Through the hard work of coordinators and presenters, the thirty-first annual AAUEC was a success. Wong says that “for now, we’ve heard nothing but great things from student and faculty members from the other universities. “ She feels that they have contributed to the success of next year’s conference, as well. “I think our committee has managed to introduce, with a lot of effort, some creative ideas and useful improvements to how the conference could be run in future years.”