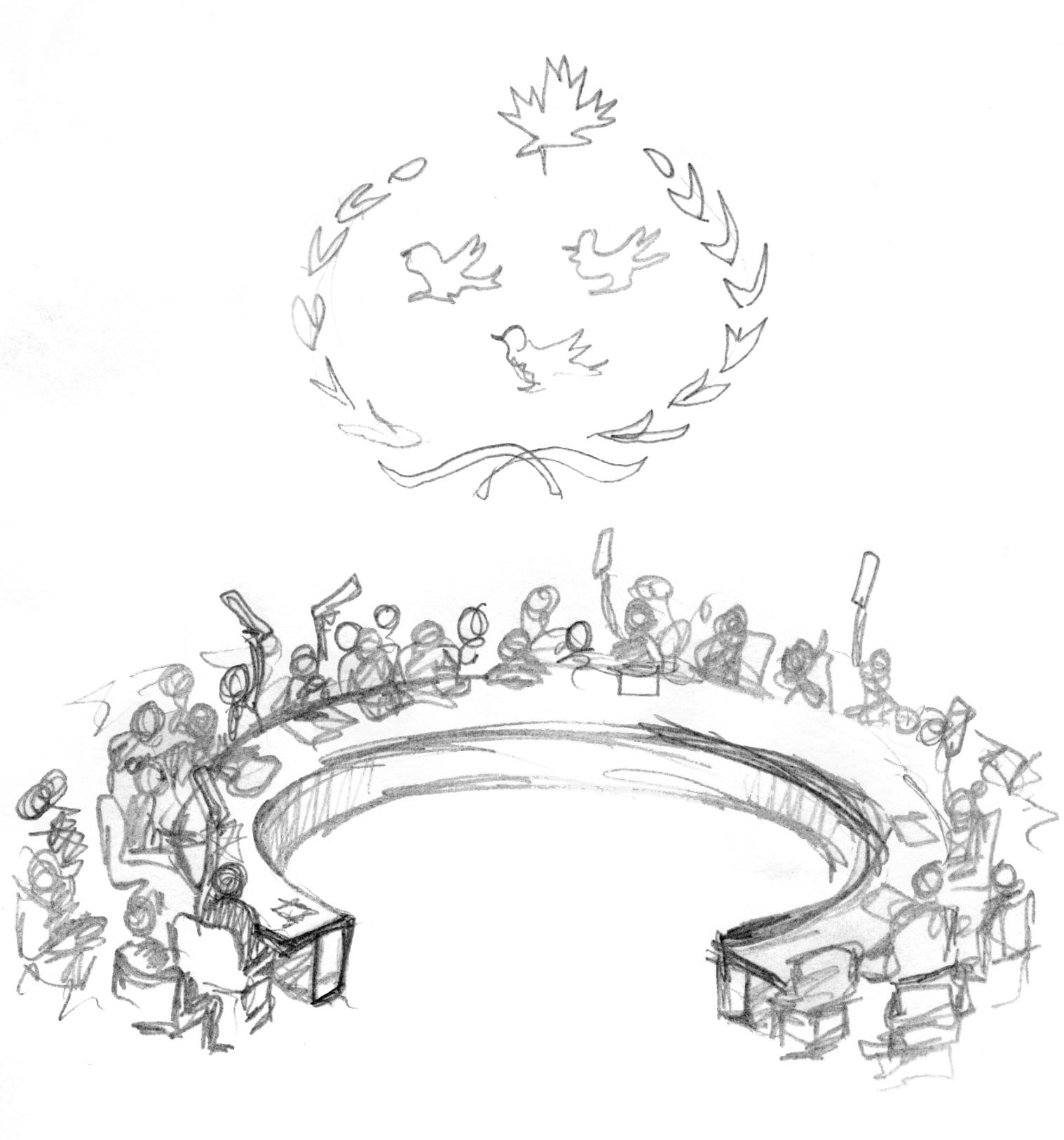 Take the ‘Model’ out of Model UN and the scene at the Sheraton Hotel in downtown Montreal would almost certainly have been cause for alarm. The ballroom was crammed with eager student members of an assortment of delegations and schools, present and waiting for the opening ceremonies. The massive projector screens that flanked the centre stage spurred shouts of praise as each school’s name rolled by and, in conjunction with the roaring chatter of the attendees, the opening ceremony for the McGill Model United Nations’ (McMUN) seemed at first to be a weak facade for a rave.

Things started soon after we took our seats. After a long and patriotic procession (bagpipes included), a few speeches delivered by the McMUN exec and a meandering filibuster from the keynote speaker, the conference officially commenced at the drop of a gavel by Secretary General Ginny Tan. Roughly 1,500 delegates, including 18 from Mount Allison, shuffled to their respective committee sessions and began to mime the democratic process we know and love, sometimes as representatives of governments they themselves personally dislike.

One such delegate was Michael Anghel, a third-year Mt. A student. “It was mainly the government’s corruption as a whole I didn’t agree with,” said Anghel, referring to Azerbaijan, the country he represented at the EU Council committee. “Their government in general is reputed as being corrupt, and they have a corrupt president who doesn’t care much for human rights.”

In MUN, delegates are expected to represent their designated country, individual, or government and work in its best interest, no matter how objectionable they find the policy. “It was hard to speak on behalf of a known corrupt government, as some of the arguments I had to make didn’t agree with what I believe is right,” Anghel said, reflecting on the challenge of accurately representing his country. “However, it was a good experience, as I was exposed to a lot of different views from around the world.”

The dynamic discussion fostered in committee sessions is often incredibly time-consuming and, as a result, pulls delegates’ attention away from reality. However, the delegation was not able to fully eclipse the real-life tension occurring south of the border. On Saturday afternoon, each committee was paused for a briefing about Donald Trump’s executive order banning individuals holding passports from seven Muslim-majority countries, potentially affecting multinational students attending the conference.

“A McMUN organizer came in and told us that the order meant some of the roughly 700 Americans attending wouldn’t be able to go home tomorrow and to come see them for help,” Jonathan Ferguson, a first-year international relations student, said. “The room was left pretty shaken realizing how real things had become, and we voted in favour of taking a breather. The Americans I spoke with expressed their frustration and disbelief.”

Several delegates from the General Assembly special session on the Refugee Crisis expressed their resentment toward the executive action by sending disparaging messages to the student delegate representing the U.S. Without condoning the controversial executive action, the committee chair took a moment to explain the inappropriate nature of the delegates’ behaviour. After this announcement, the U.S. delegate was sent roses by several members of the committee as consolation for the harassment.

While this news was devastating for many, no Mt. A students in attendance were impacted directly by Trump’s ban. Committee chairs handled the disruption admirably and the conference continued.

Although reputed as a high-profile and often serious conference, McMUN did not shy away from using its city’s vibrant culture as a hook to draw in out-of-town students. Spending a weekend in a city with a nightlife as rich as Montreal’s was interesting, to say the least.

To accompany the delegation and forums, McMUN set up a bar crawl and the infamous “McParté,” a party hosted at renovated theatre L’Olympia. McParté saw hundreds of plastered students wander in through its doors to dance for over six hours straight to energetic dance mixes. Over the course of the evening, participants exclaimed, “McParté is lit!” enough times to coin an unofficial slogan for the event.

Despite all the glamour, the Mt. A UN team did not make it out of Montreal unscathed. Two of the many notable happenings included one encounter with a con artist and a particularly dramatic disappearance of almost a dozen plastic yardas from the hotel. Susu Kobla-Tsikata Graham reflected on his experience at McMUN while we cabbed back to the airport: “It’s a death trap. All you get is alcohol poisoning and the flu….I would still go back, though.”