Mt. A students use theatre for social change 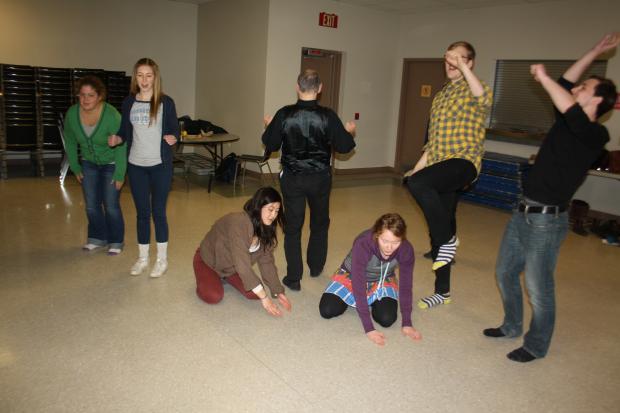 We all know that art can entertain us, but what is sometimes overlooked is that art can also teach us to change our social ideology. This is the philosophy behind Theatre of the Oppressed, an international organization and theatre practice that uses theatre to create social and political change. Mount Allison students were introduced to this form of artistic activism last weekend when Theatre of the Oppressed director and facilitator Luciano Iogna presented a workshop and public lecture through the Centre for International Studies (CIS).

Iogna, a Theatre of the Oppressed and Forum Theatre specialist, has worked in countries all over the world to use theatre as a means of political and social change.  During his CIS sponsored lecture, Iogna explained that the Theatre of the Oppressed and Forum Theatre are participatory forms of theatre that were developed to engage spectators (or “spect-actors”) in political issues by giving them the opportunity to become active participants in the creation of theatre.

Throughout his public discussion Jan. 31, Iogna shared his experiences of working with oppressed groups of people in the Ukraine, India, and Turkey. In each case, he used theatre workshops, like the one he was to conduct with Mt. A students, as an avenue to explore systematic oppression on both a general and specific scale. In each instance, participants and spect-actors were able to openly discuss a taboo issue because they used the play as both a catalyst and a buffer zone for discussion, thereby protecting individuals, while beginning to make real life changes.

Following the discussion, a group of students from a variety of academic disciplines worked with Iogna to create their own Theatre of the Oppressed experience, with the aim of learning how to use theatre as a tool for global development and engagement.

“[I want participants to come away with an understanding] of the potential of form theatre as a tool in terms of education and social change,” Iogna said. “For this group specifically, in terms of global development and where they can take it as a tool to help them work with different communities”

The Mt. A group chose to examine the issue of domestic violence against women in their performances. After a spirited discussion provoked by the topic, they broke up into small groups to create their own scenes in an effort to talk about a pressing, yet sensitive social issue.

Participant Franziska Glen was particularly interested in learning about the concept of theatre with a conscience, like Theatre of the Oppressed.

“[With this form of theatre], you’re not only creating entertainment,” Glen said, “You’re creating reactions, provoking people in either positive or negative ways, but always getting people to think.”