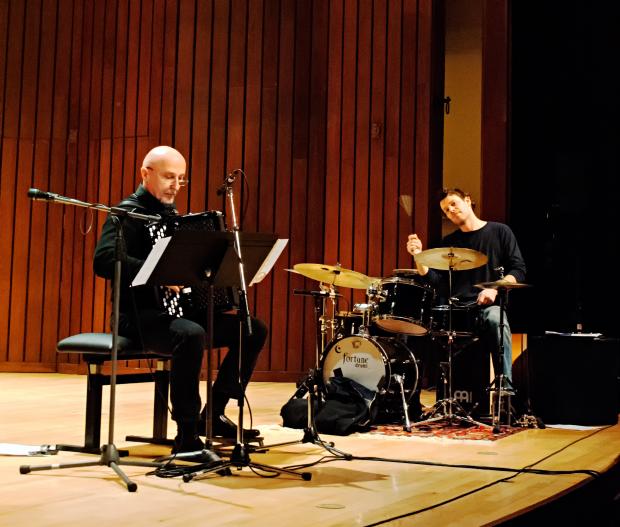 If you were to believe that Indian classical music, flamenco, and jazz could never be successfully combined on a single stage, you would be quickly proven wrong by the performance given by Diomira in Brunton Auditorium Feb. 8. This talented and dynamic trio was featured as this year’s fifth and penultimate Performing Arts Series concert, and quickly captivated their audience with a unique fusion of several international genres and styles all focused through only three simple instruments. The group consists of Joseph Petric on the accordion, Nick Halley on percussion, and Dinuk Wijeratne, the group’s pianist and composer.

The musical stylings of this ensemble freely migrate between the eclectic and the visionary, and combines such a vast number of cultural influences that it is deserving of its own category. Wijeratne’s compositions are experimental without being arrogant, and complex without being incomprehensible. Each instrument in the ensemble plays its own role in the creation of a piece’s unique feel; Petric’s soulful accordion melodies contrast with the intricate jazz rhythms of Halley’s multi-faceted percussion techniques, and all are comfortably layered atop Wijeratne’s pseudo-classical piano.

In addition to experimenting with genres and cultural traditions, Diomira’s music explores the use of extended techniques, a contemporary music method that deliberately plays with and challenges what instruments are capable of, and how this can come across to their listeners. For their third piece, “Silent Fanfares,” Wijeratne removed parts of the grand piano so he could play directly upon the instrument’s strings with his own fingers. This innovative technique allowed for a whole new array of illustrious sounds that gave the piece a unique, spectral quality.

Many of the evening’s compositions were informed and inspired by poetry and literature; even the ensemble’s name is derived from the decadent and multi-domed city of Diomira from Italian writer Italo Calvino’s imaginative novel Invisible Cities. Their flowing and cyclical piece “Once the Colour of Fire (Now the Colour of Ashes)” is inspired by a poem by Argentinean writer Jorge Luis Borges, and two other pieces draw upon imagery from poetic translations of the Persian philosophical text The Rubáiyát of Omar Khayyám. Because Wijeratne’s compositions so skilfully navigate a wide range of international textual references, they are imbued with a transcendent quality that opens up entirely new avenues of musical creativity.

Mount Allison  University was Diomira’s second stop on their Maritimes tour through Debut Atlantic, an organization dedicated to promoting and celebrating both traditional and cutting-edge classical music. A large part of their mission is also musical education, and to facilitate this, Diomira called for young students to exercise their compositional skills by creating and conceptualizing a “musical storyboard” for submission and evaluation. Out of these submissions, Wijeratne selected a piece entitled “Thekla” by Donovan Cassidy-Nolan, a grade ten student from Wolfville, Nova Scotia, and fashioned his idea into a fully-fledged composition to be performed by Diomira throughout their tour.

Formed in April 2011, Diomira’s mosaic of cultural inspirations and literary influences has already begun to receive critical acclaim after their debut performance was recorded by CBC. Wijeratne, the musical and conceptual backbone of Diomira, was born in Sri Lanka and has attended the Royal Northern College of Music in the United Kingdom and the Mannes College of Music in New York. He conducted and performed alongside Yo Yo Ma and the Silk Road Ensemble during his Carnegie Hall debut in 2004, and currently directs and conducts the Nova Scotia Youth Orchestra in Halifax.

The Mount Allison Performing Arts Series will conclude the season with a concert by Flûte Alors, a Montréal-based recorder quartet. The event will take place in Brunton Auditorium on March 15.