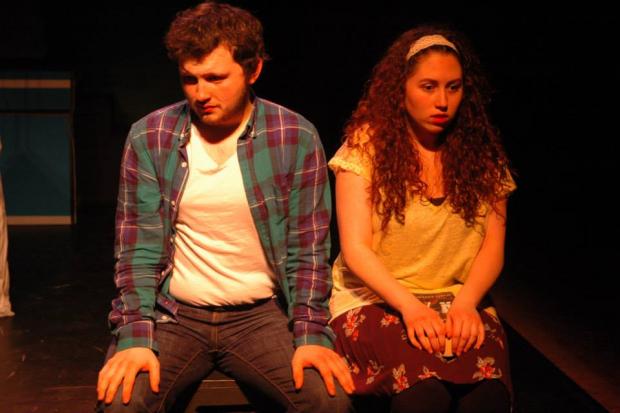 As Murmur opened, audience members were met with a sparsely furnished set, in the centre of which sat a hospital bed. A friend and fellow viewer observed that when a hospital bed is on stage, you know the show is going to be a tearjerker—either that, or it’s going to be riotously funny.

In fact, Murmur proved to be a mix of both. Using comedy and heartache in equal parts, the student devised play, written and directed by fourth-year student Heather Baglole, examined the ostensible relationship between love and biology.  As a study of the fragility of human life in contrast with the enduring nature of love, the performance prompted the audience to wonder whether there are some questions that science can’t answer about the human heart.

The storyline centred on the marriage between a young couple, Anabelle and David. Anabelle (played by Kelsey Otto) suffers from a heart murmur, and after a big fight with David (Sam White), she slips into a deep coma. Her terminal condition leaves David to tenderly, yet desperately, ruminate on his first and only romantic relationship.

Anabelle is treated by David’s sister Cora (Piper Riley Thompson), a doctor with a hardened and cynical outlook on love. Her resistance to the affections of TJ (Nicholas Alberts), a lovesick nurse, are explained by her scientific background and a previously broken heart.

Although the play’s subject matter is necessarily emotional and suspenseful, the heavier parts of the performance were broken up by subtle, yet highly effective winks of humour. Baglole’s writing allowed space for her actors, White and Alberts, most notably, to imbue the performance with comedic relief through their gestures, intonation, and facial expressions. Both White and Alberts displayed a tremendous sense of comedic timing, while managing not to compromise the psychological intricacies of their characters.

In this way, it was the small gestures that brought the writing to life, and filled the performance with personality and nuance. However, just as the play’s subtleties were its strong points, at times the sentimentality of the more significant moments were lost due to a tendency to overact the more emotional scenes. There is a fine line between touching and melodramatic, and there were moments that tended to lean towards the latter, particularly during flashbacks.

That said, for the most part the actors were comfortable and at home in their characters. Thompson in particular acted with a sense of ease and commitment to Cora that enabled the audience to connect to her throughout her emotional and psychological development.

The non-linear progression of the piece is divided between the present moments in the hospital and Anabelle’s comatose flashbacks. To heighten this effect, the play made use of dramatic lighting techniques designed by Gregory McLaughlin, and videography by Xavier Gould.

“I wanted to use [videography] to signify the differences between Annie’s ‘mindscapes’ as we called them,” Baglole said. “Each had a different theme (music, poetry, movies, and novels), and the video uses pictures and clips to help shape those different worlds.”

These effects significantly contributed to the show’s innovation and intrigue. It provided another layer of audience interpretation and gave a new dimension to the otherwise minimalist set.