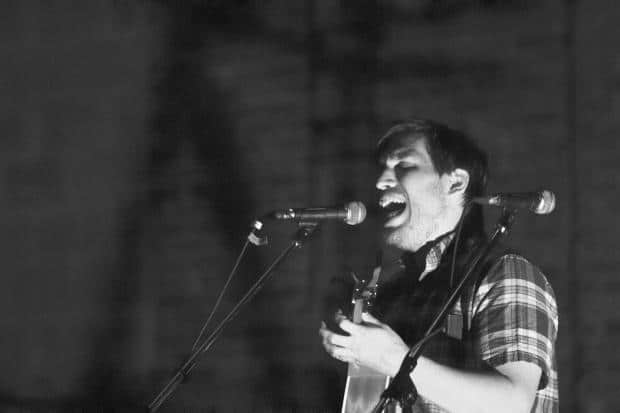 Imagine going to a concert and seeing only one musician on stage, and yet hearing three or four voices singing at once. It might sound strange, but that was the exact experience that Pat LePoidevin provided last Wednesday at the Sackville Music Hall.

LePoidevin, a celebrated musician and Mount Allison alumnus, performed alone and equipped with a few instruments: a guitar, a ukulele, two microphones, and a looper pedal. With these tools, he recorded a song on stage as he played it, in a way that was both complex and beautiful to witness.

LePoidevin recorded a particular strumming pattern, and then played the recording back while playing along with a new strumming pattern. He repeated this process several times until eventually, the audience could hear three or four layers of music that blended together flawlessly—all done with a single guitar. He used this same method to record different vocal parts, ultimately harmonizing with his own recorded voice.

The result was an auditory illusion: had I heard the music without seeing the stage, I would have thought that there were multiple musicians playing the different parts. Even while watching the show, it was sometimes hard to tell which part he was actually playing at any given moment, as opposed to what was already recorded.

LePoidevin’s unique folk sound, combined with the dim lighting, created a soft yet powerful atmosphere. Compared to many Sackville concerts, the audience was relatively large and enthusiastic; many of them had obviously seen him before or knew him personally, which further demonstrated his closeness to the Sackville community.

In turn, he spoke to the audience casually throughout the show, even taking the opportunity to poke some fun at the current midterm period.

“You should all come over…unless you have a midterm tomorrow morning, in which case you should come over anyway,” he joked in reference to the after-party, which took place at Thunder & Lightning.

LePoidevin treated the Sackville audience to a brand new song. “We’ll see what happens,” he said just before playing. He played two sets, with a 15-minute intermission during which people could buy merchandise. He ended each set with an acoustic song. For this, he would take the guitar or ukulele and come down to the floor, playing right in front of the audience.

Because his playing style has a wonderful and unique sound, LePoidevin’s acoustic performances are thoroughly enjoyable. Without all the other recordings, I could focus on his voice and strumming patterns in their natural states. This method, I found, made it much easier to really appreciate the complexity of his voice and, in particular, his vocal range. The fact that there was very little lighting where he stood added to the organic, intimate feeling of the acoustic performance.

There is something that is indescribably special about Pat LePoidevin’s music. Prior to this concert, I had never listened to his music, and yet somehow his presence felt pleasantly familiar. His songs tell stories of nostalgia, family, love, and other themes that can strike a chord with anyone who is willing to listen.