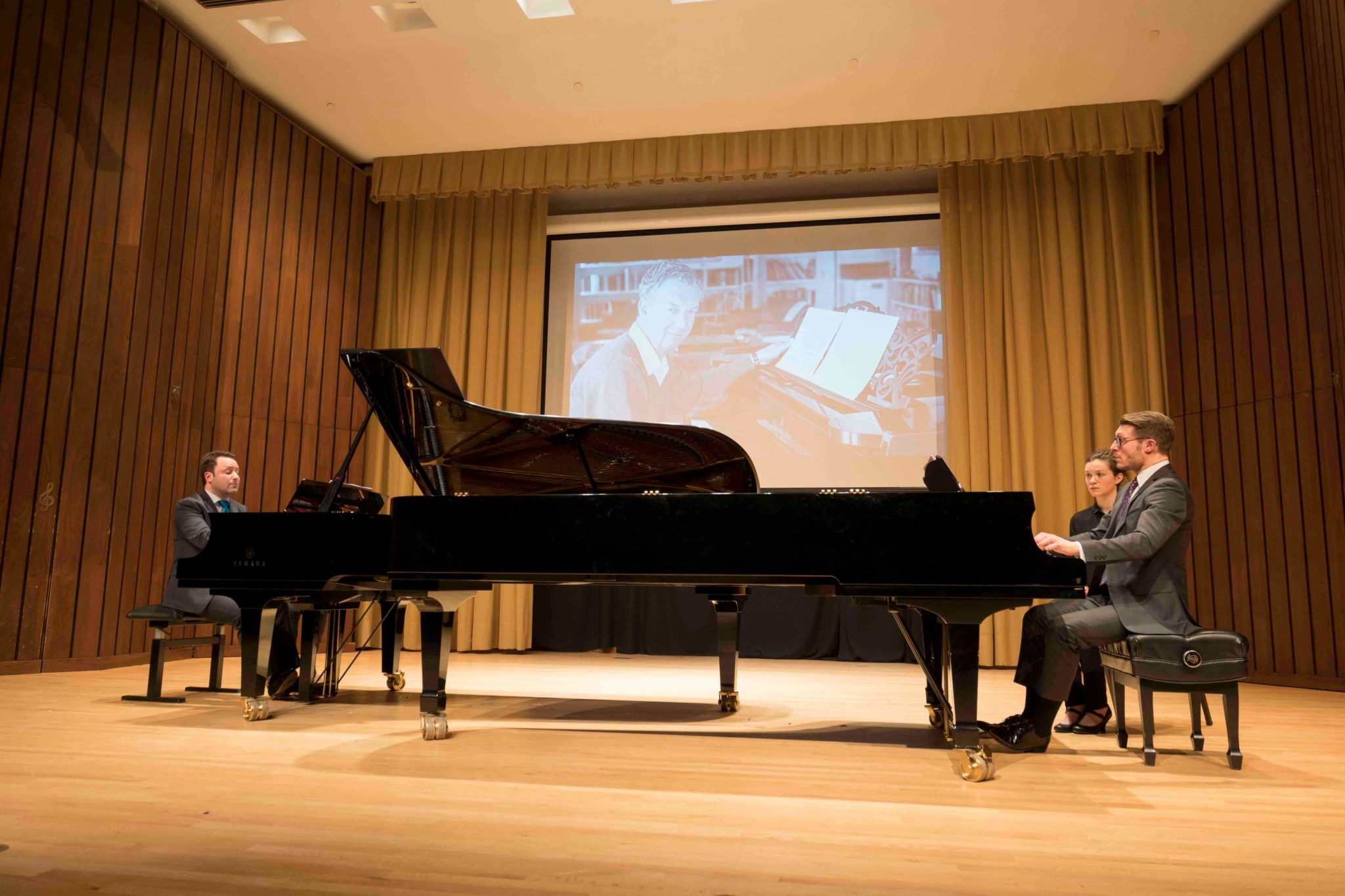 Last Saturday evening, pianists Adam Sherkin and Stephen Runge collaborated in a piano recital that featured works for solo and duo piano. Works by English composer Benjamin Britten (1913-1976) dominated the program, with works by Colin McPhee (1900-1964), one of Britten’s friends, as another main feature.

“The concert explored composers I was previously unfamiliar with and presented them in a unique way through video clips, pictures and anecdotes in addition to the music itself,”  said second-year pianist Brooklyn Duffie.

“The repertoire was full of colours and textures,” said Duffie. “I liked how there was an emphasis on music written for two pianos, an area that is not as common as solo piano repertoire.”

The Sackville community is becoming increasingly familiar with Sherkin as a pianist and composer. The Toronto native has visited the Mt. A music faculty in the past as a guest performer and speaker and is a friend of department head Dr. Runge.

The concert opened with Sherkin’s performance of Holiday Diary, a four-movement work for solo piano by Britten. Sherkin did a remarkable job of conveying the contrasting elements from the titles of each movement.

In the second movement, Sailing, different aspects of sailing were evident. A light melody conveying the calmness of the water opened the movement, transitioning to bouncier and more active rhythmic figures later on in the movement before returning to a gentler atmosphere. In the following movement, Fun-fair, constant motion was lively and engaging, and especially effective during ascending scalar-like passages.

The next work, a set of Balinese dances by Canadian composer Colin McPhee, featured three ceremonial dances that were recorded by Britten and McPhee. This was the first time Sherkin and Runge appeared on stage together, performing on separate grand pianos facing each other, with their high level of communication as collaborators immediately on display. Each movement conveyed a shimmery effect, with a clear tonal centre around which all the motion revolved.

The first half ended on a high note with Mozart’s Sonata for Two Pianos, a nice contrast to the 20th-century music that comprised the majority of the recital program. Their performance was well balanced and in sync, often sounding like one grand piano in passages when they were playing exactly the same music material.

The second half featured more of Britten’s works, at the beginning and end, with works by McPhee in between, including Sherkin’s own personal take on McPhee’s Like the Stirring of a Thousand Bells.

The first set of the second half, Two Lullabies by Britten, showcased contrasting lullabies: the first, Lullaby, was simple in texture, while still adding a mysterious element to the work. The second, Lullaby for a Retired Colonel, was evidently different, with its dotted rhythms evoking a military.

The recital ended with two more works for duo piano by Britten, Mazurka Elegiaca and Introduction and Rondo alla Burlesca. The former continued the mysterious soundscape reminiscent of Britten’s works that were played earlier in the program, although moments of chaos arose in the middle section, elicited by well played, thick, present chords.

Introduction and Rondo alla Burlesca was one of the livelier and more energetic works in the program, a fitting conclusion to the recital. Sherkin and Runge captivated the audience through their clear articulation of syncopated rhythms, a mixture of gradual and sudden momentum changes and their striking approach to the various shifts in moods throughout the work.