Regional in origin, national in scope 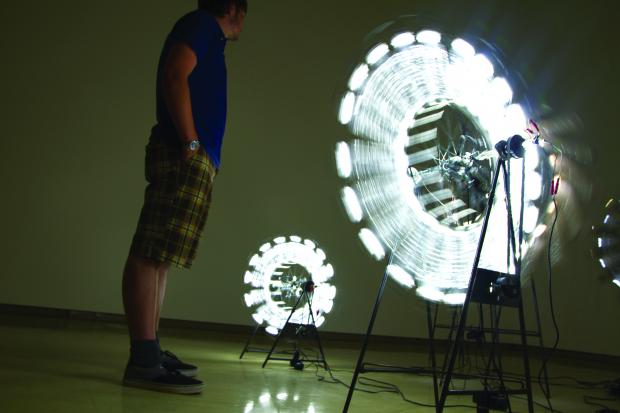 To define a country and a people as diverse as contemporary Canada seems like a daunting task, but Denise Markonish, a curator for the Massachusetts Museum of Contemporary Art, was up for the challenge. Over three years, Markonish visited studios from coast to coast, crafting a diverse exhibition of contemporary Canadian art patriotically titled Oh, Canada. A large part of this benchmark show is currently on display at Mount Allison’s Owens Art Gallery until Sept.  21.

In her introduction to the exhibition, Markonish explains that after visiting four hundred studios over three years, sixty-one artists and collectives were chosen in an attempt to provide insight into our country’s “most noteworthy art practices and ideas, including … a deep and continuing interest in the land, craft, and identity politics.” To this end, the exhibition showcases a full spectrum of different mediums and techniques, which include traditional painting and sculpture, and also hand craft, multi-media, performance and installation pieces. When displayed together, this varied collection of contemporary art provokes the viewer into re-evaluating their perception of Canadian identity.

Twenty-one of these artists and collectives are currently represented at the Owens, hailing from nearly every region of the country, including several prominent local artists from the Maritimes. “The Atlantic presence is often under represented [in Canadian Art], but in this show that is definitely not the case,” said Katie Patterson, one of the Owens’ student interns who helped install the show over the summer.

One such Atlantic artist is Janice Wright Cheney, a Mt. A alumna who is now based out of Fredericton. Cheney’s contribution to the exhibition is a sculpture entitled Widow, a looming, life-sized depiction of a rearing bear on a pedestal, entirely adorned with hand-knit woollen roses in varying shades of red.

Other pieces included in the show are slightly harder to find, and require a bit more work on the part of the viewer. For example, Halifax artist Michael Fernandes brought a trained archer into the Owens to shoot seven arrows directly into the walls of several of the galleries as part of his work entitled In Between. Some of these arrows are prominently displayed between pieces by other artists, while others are more easily overlooked. “Most guests don’t find all seven arrows,” Patterson says.

Toronto artist Micah Lexier’s piece A Coin in the Corner is similarly easy to overlook. The installation consists of several identical, small metal plates hidden in the corners of several of the galleries. These coins are glued to the ground and depict several lines that point in specific directions relative to the surrounding walls. An extra coin is available at the front desk of the Owens for any curious viewers who don’t want to crouch to see the details of the piece.

Other samples of the Oh, Canada exhibition are currently on display at three other regional galleries: Galerie d’art Louise-et-Reuben-Cohen and Galerie Sans Nom in Moncton, N.B., and at the Confederation Centre Art Gallery in Charlottetown.