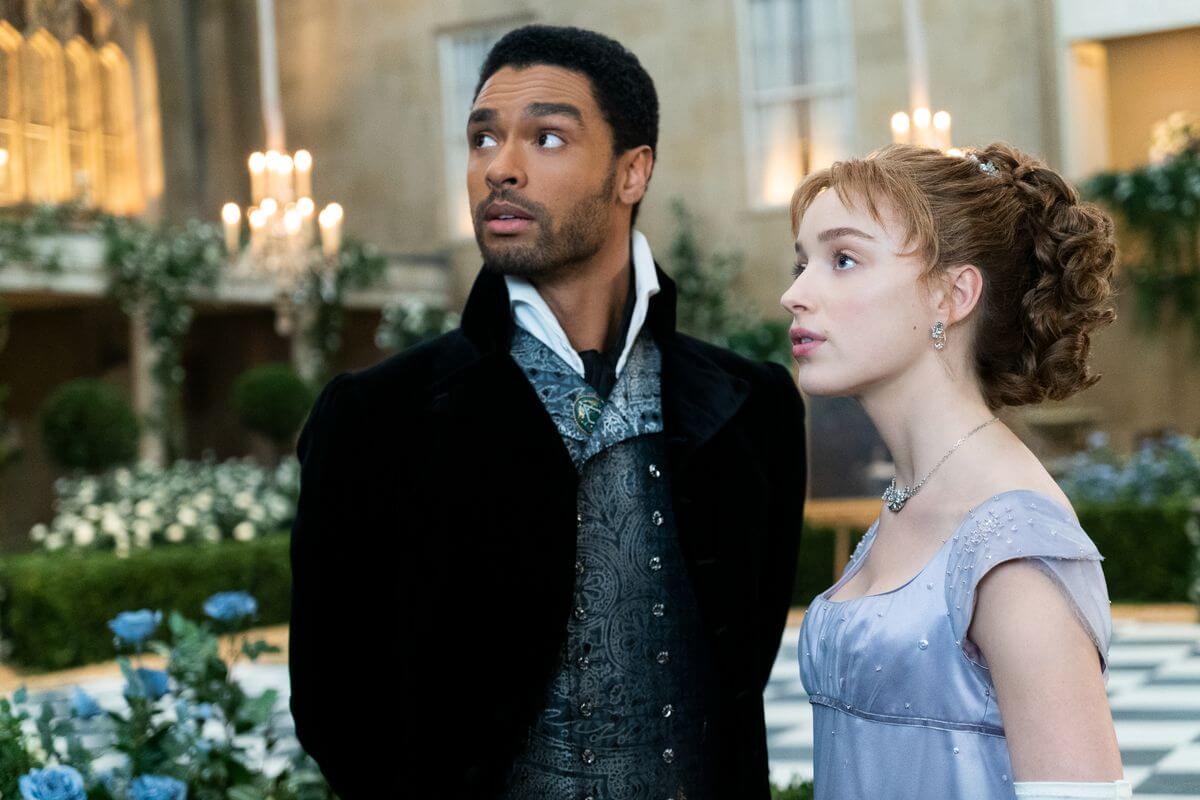 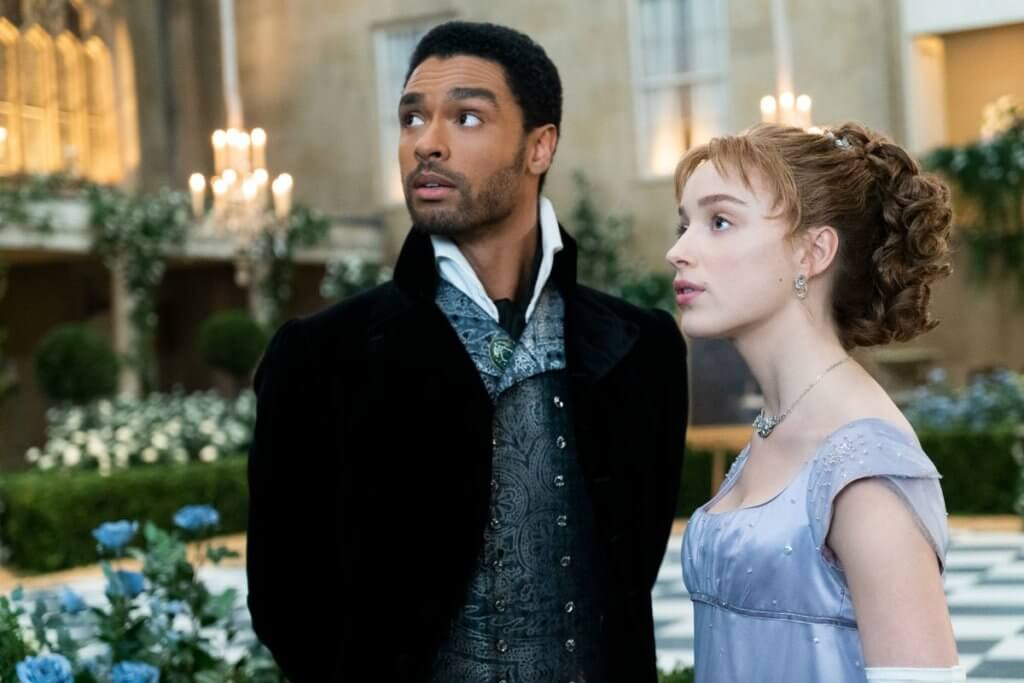 Dearest readers: over the holiday season, many of us had time to delight in the offerings of time with our families – giving gifts, eating far too much turkey, and enjoying the latest entertainment from the comfort of our own homes. One such option set the world abuzz with talk of the most tantalizing stories of high-standing families in a fictional London trying to find love during the most notable social season to date. I am talking, of course, of Bridgerton, which has quickly proven to be the crown jewel of Netflix, as it has been viewed by over 86 million households worldwide in addition to being renewed for another season. Who would have thought that so many people would flock to the members of the Ton for scandal, intrigue, and love?

I hope you read that in your best Lady Whistledown (aka Julie Andrews) voice. Like many, many people, I binged Bridgerton over the winter break. It’s debut on Christmas Day made it the perfect escape from dinners with family and the general monotony of a COVID-19 Christmas with its lush, pastel-infused interpretation of Regency London. When I say interpretation, I mean it – Bridgerton is adapted from a series of romance novels by Julia Quinn from the early 2000s, with the first season following the first book, entitled The Duke and I.

The plot of the eight-episode season is relatively simple: Daphne Bridgerton (Phoebe Dynevor), the eldest daughter of the eight Bridgerton siblings, makes her debut in London’s social season with the hopes of securing the best match possible for herself and her family. When a possible scandal threatens to ruin her prospects, she strikes a deal with the dashing and newly-minted Duke of Hastings (aka Simon, played by Rege-Jean Page). They will pretend to form an attachment to keep the vulturous mothers of the seasons debutantes off his back, as he has no intention of marrying. This will also make the other eligible men jealous and give Daphne her best possible chance at marrying well and setting her younger sisters up for success.

There are a lot of other players at hand here as well, so try to keep up: Daphne’s three older brothers Anthony, Benedict and Colin (Jonathon Bailey, Luke Thompson and Luke Newton respectively) have their own share of trouble during the seasons, Marina Thompson (Ruby Barker) is new to town with a secret of her own, and best friend duo Eloise Bridgerton (Claudia Jessie) and Penelope Featherington (Nicola Coughlan) are trying to suss out the identity of the secretive Lady Whistledown, the anonymous provider of gossip for the entire Ton, for Queen Charlotte (Golda Rosheuvel).

Still with me? Good. That’s about as far as I’m willing to get into the story of Bridgerton, because its twists are best left discovered on your own time. The cast all does a phenomenal job with their material, with standouts being Jessie’s Eloise (who is so heavily queer-coded that it’s not funny, and it has me desperately hoping they change her for the series), Coughlan’s Penelope (most will know her from Derry Girls, where she’s also excellent, and she uses both her comedic timing and dramatic skills perfectly here), and Thompson’s Benedict (the least problematic Bridgerton sibling).

Special shoutouts also go to the costume department and the score. While neither are historically accurate (which I know many take issue with), my main argument is that this is a show based off of a series of romance novels. It isn’t meant to be historically accurate. This show plays with modern sensibilities about what the Regency was like and what it was actually like for people of this standing in really fun and engaging ways, and it was a delight to see play out on screen. Hearing “classical” covers of songs like “Girls Like You”, “thank u, next” and “Wildest Dreams” gave me an immense amount of joy, and many of the costumes made the actors pop on screen in delightful ways.

Another choice made by the showrunners beyond the modern sensibilities on Regency England was the element of race on the show. There are plenty of Black actors on the show in places of prominence. The jumping off point of this was the fact that some art historians have discussed the fact that the real life Queen Charlotte would have some sort of mixed-race ancestry given some of her facial features in portraiture from the time, The show takes this and runs with it, but its not foolproof, as there is a significant lack of Asian representation. Instead of letting race be a moot point in the shows alternate history and letting it be an accepted fact, Simon’s maternal figure Lady Danbury (Adjoa Andoh) makes a vague mention of how society was divided by color until King George III fell in love with a Black woman and racism was seemingly erased entirely. Again, the show is meant to be an alternate history, so I can see what the show was trying to do here, and certainly seeing a non-white woman in a position of power can be empowering and open doors to those of other races, but I can’t help but think about the comparisons it draws to Meghan Markle in the royal family – just because you get there doesn’t mean the hatred stops. It might have been smarter to leave it alone and not talk about it, and that might have made it more natural rather than enforcing the discussion of race. It’s a refreshing look at Regency London, but it certainly could have been done better than it was, a problem I hope they fix for season 2.

Finally, a warning before you dive in, gentle reader (sorry, I’ll stop now): there is a very controversial scene in Episode 6 that is easy enough to find with a quick Google. I would suggest giving a few episodes a try to get a feel for the show and then looking up what the moment is so you’re warned in advance and can skip over the moment as a whole, if that’s something you need to do. The show doesn’t have a content warning for the moment, which a lot of people have issues with as well, so use your own discretion.

At the end of the day, Bridgerton is a diversely-cast feast for the eyes that you won’t want to stop watching until you reach an end that leaves you craving for more. Hopefully not for too long, though, as the second season is (hopefully) starting production in the spring. Until then, faithful readers, we’ll just have to imagine what the next social season could have in store for our dear Bridgerton family with baited breath.