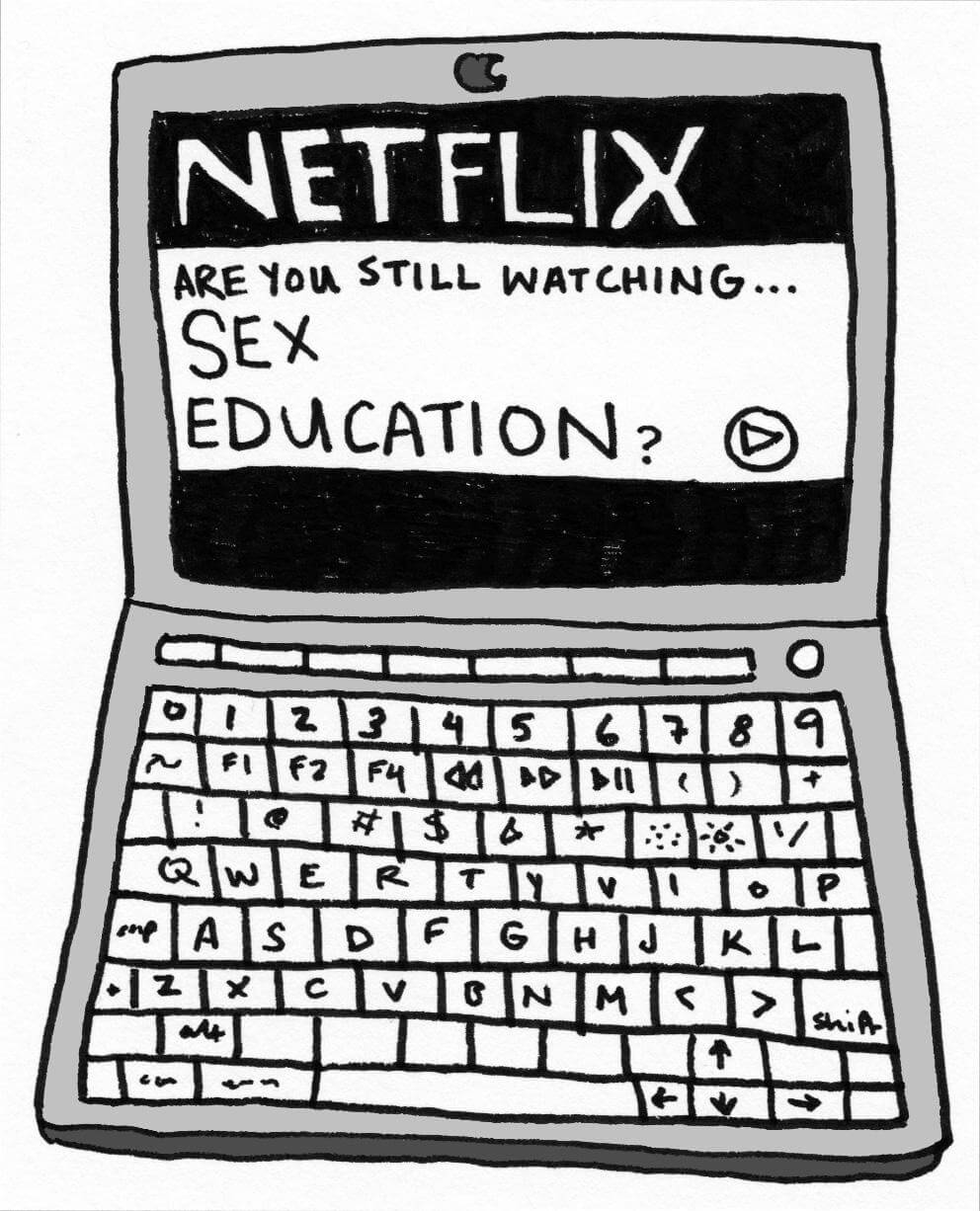 It’s what inevitably happens: you’re trying to procrastinate starting your homework and you find yourself scrolling through Netflix. I’ll be the first to admit, I find myself there too often. I was stuck in this loop last January when I should have been doing homework and came across a new show on the platform, Sex Education. I watched the trailer, read the pitch for the show, and decided “What the hell?” before diving in.

Little did I know, I was about to encounter one of my new favourite series.

The pitch for the show is delightfully quirky: Otis Millburn (Asa Butterfield) is a teenager starting a brand new school year. He’s awkward, shy and not very popular. His mother also happens to be a sex therapist, which makes being a teenage boy even more difficult. Otis starts a sex therapy clinic after being roped into it by tough girl Maeve Wiley (Emma Mackey), who handles the business end of things. Also along for the ride are Otis’s best friend Eric (Ncuti Gatwa), school bully Adam (Connor Swindells), well-meaning Aimee (Aimee Lou Wood) and swim team superstar Jackson (Kedar Williams-Stirling). There are other colourful characters at Moordale Secondary and in the surrounding community of course, all of whom are incredible, but they deserve to be discovered on their own.

The thing that charmed me most about this show is how it doesn’t shy away from anything. And when I say anything, I mean anything. There are very frank conversations about abortion, the different ways people choose to have sex, how utterly clueless teenagers are (especially when they turn to one another for information) and how, as Otis says in the first season, “We can’t choose who we’re attracted to.”

In the second season (which just came out this past Friday), there is a powerful storyline that involves sexual assault in a way that is true to the offbeat, comedic tone of the show, without brushing it aside. There are candid discussions around sexuality as well, with several of the show’s leads and supporting characters being part of the LGBTQ2+ community.

The script is incredibly clever in that everything is tongue-in-cheek while also being blatantly obvious. Everything feels well-paced, never rushed, and all the jokes land perfectly. It’s charming in a way that I haven’t encountered in a long time – it reminds me of Gilmore Girls, but set in England and a little raunchier.

All the characters have defined character arcs, ones that will have you cheering for the character you used to hate, and loving to hate some that you thought were okay. You’ll also appreciate how colourful this show is, as I’ve never seen a more fashionable group of high school students. Pairing this with the gorgeous cinematography of the show, Sex Education is pleasant to watch from a purely visual stance as well.

For me, the standout performance is from Gillian Anderson. You’re likely familiar with her as Agent Scully from The X-Files or as Media from American Gods, but here she is Dr. Jean F. Millburn, the well-meaning, sometimes over-intrusive mother of Otis. Not only does she make the parent character – who is so often forgotten in shows geared towards a teenage or young adult audience – extremely likable, but she also serves as a poignant reminder that people who are older also have romantic and sexual feelings. Jean has an excellent moment towards the end of the second season that I obviously can’t talk about, but which gives her a moving moment of realization that maybe she should take her own advice sometimes.

While I love everything about Sex Education (as I said, it’s one of my favourite shows), the thing that has made it such a massive hit is how heartbreakingly relatable it is; that’s also what captivated me in the first place. When you’re in high school, or even the early stages of university, you just want to find out where and how you fit in the new social environment. You want to find somebody that understands you, whether they’re a friend or more than that. And everybody has questions about whether or not they’re going about it right, questions that they don’t want to ask their parents or adult authority figures because they wouldn’t understand. Otis’s excess of knowledge thanks to his mother makes him not only a source of comedy, but a source of education as well. After all, that’s the second half of the show’s title.

Sex Education is a show everyone should watch. Not only is it refreshingly real in its depiction of what modern romance looks like when we’re all trying to figure out who we are, but it’s also incredibly watchable (and re-watchable) with only eight episodes a season. It is charming, witty and just generally fun to watch, which is something we all could use a little more of as the cold winter months carry on.