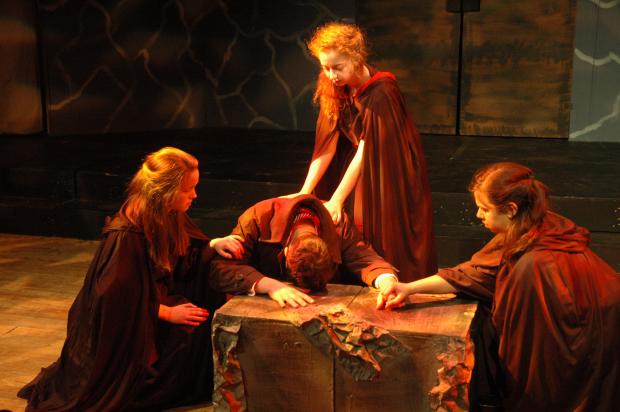 In the evocative and entertaining conclusion to Windsor Theatre’s winter season, fourth-year drama students Gregory McLaughlin and Jake Planinc teamed up to present Sackville Dionysia, an incredible back-to-back duo of traditional Greek theatre. Despite drawing upon material written thousands of years ago, these aspiring directors transformed two classics into modern masterpieces while still staying true to the essential elements of the Greek tradition.

The production began with the devastating second instalment of Aeschylus’ Oresteia, entitled The Libation Bearers, and lightened the mood in the second half with McLaughlin’s hilarious adaptation of Aristophanes’ intellectual satire, The Clouds. Whereas McLaughlin’s comedy updated much of the political and sexual humour of the original piece to suit a contemporary audience, Planinc’s treatment of the classic tragedy was carefully calculated to maintain its gut-wrenching power while still being accessible to those less familiar with the genre.

The Libation Bearers depicts a young Orestes and his sister Electra who plot revenge against their deceitful mother, Clytemnestra, and her new husband, King Aegisthus, who together murdered the legendary Agamemnon. Despite believing that avenging his father is justified, Orestes is overcome by the horror of his crime and is eventually consumed by the weight of his violent deed. Although many different translations exist of Aeschylus’ original text, Planinc chose Ted Hughes’s version as it preserves the play’s authenticity and emotional breadth.

“I think there’s something to be said for this play having lasted in its traditional form for thousands of years,” said Planinc. “I really like honouring the playwright’s intentions as much as possible.”

Growing up in Toronto with a father who teaches classics at McMaster University, Planinc admits that he was exposed to Greek theatre early in his life, and that it left an impact on him.

“I love Greek plays, especially the tragedy,” he explained, noting the emotional power that this genre is capable of producing. “It’s a big goal of mine as a director to make people feel those same feelings that I had growing up.”

Planinc was particularly affected by the Oresteia due to its depth and difficulty. For brevity’s sake, Planinc cut several parts from this second instalment, but aspires to one day direct and produce the epic trilogy in its entirety.

“I love this story,” he said. “It’s often cited as a huge challenge for the director. I took that personally and wanted to see how well I could pull this off.”

McLaughlin and Planinc worked together to reproduce the style and effect of the ancient Greek theatre. To do so, they created a semicircular seating arrangement that faced both the stage and beyond into the seats of Convocation Hall, invoking the broad, open stages from ancient times.

“We wanted that huge depth behind the stage. That was really important to us,” said Planinc, also noting that this arrangement allowed for Aegisthus’ death cry to echo out from behind the stage. “You hear it, but it also falls back into the emptiness of the hall.”

Planinc’s interpretation also stayed true to the Greek tradition by having both characters’ deaths occur off-stage. “I think the Greeks had it right,” said Planinc, believing that this method preserves the emotional significance of the event. “If you leave the most intense, climactic moment of the show to the imagination, everybody interprets it in their own way. I think that it’s much more powerful.”

While his production stayed true to many aspects of the original tragedy, Planinc tried to emphasize the more complex elements of Orestes’ character. “I didn’t want it to be a straight revenge story where the protagonist reigns supreme at the end,” he said, instead highlighting the tragic and morally ambiguous aspects of the character as he descends into madness. “It’s not a straightforward story; I didn’t want the audience to fully take Orestes’ side, I wanted the characters to be richer and deeper than that.”

Planinc looks forward to working with McLaughlin again this summer on a production that will appear in September at the Atlantic Fringe Festival in Halifax. After that, he plans to remain involved with the dramatic arts both in Halifax and at Mt. A.