Skip to content
Sackville does the Time Warp again

The annual cult classic ‘Rocky Horror Picture Show’ took over the Vogue Theatre on Friday night, and transformed it into “transsexual Transylvania”

On a blustery Friday night, the eager Transylvanians of Sackville ventured out to see the infamous cult classic Rocky Horror Picture Show at the Vogue Theatre. The theatre-goers were decked out in red and black and lined up down the block as they shivered with antici…pation of what was in store.

The film’s narrative centres around a newly engaged couple who become lost in a rainstorm thanks to a flat tire. They stumble upon a mysterious castle where a group of peculiar individuals are putting on their annual Transylvanian Convention. They quickly meet mad scientist Dr. Frank N. Furter, the “sweet transvestite” who introduces them to a world that is brimming with peculiarities. These range from the lab-created “perfect man” named Rocky, to a grotesque “mercy killing,” to the seductive and sexual tensions that occur in the castle.

Upon entering the Vogue it became instantly clear to me that the spirit of Rocky Horror was in the air, as the lipstick-wielding staff were excitedly hunting down the foreheads of Rocky Horror “virgins” to scribble bright red Vs on them (one of the major traditions for those who are seeing the show for the first time).

For the Rocky Horror “virgins” who are reading this, the film was released in 1975, directed and written by Jim Sharman, alongside Richard O’Brien.

Rocky Horror gained its famous cult following in New York City when an audience member began shouting phrases at the film on the screen, and others joined in. This movie theatre behaviour caught on and developed into an array of traditions that are carried out by the audience members when Rocky Horror comes to the screen. Our showing in Sackville was no different. The atmosphere was filled with a sense of collective adrenaline and a readiness to leave all inhibitions at the door and fully embrace the frenzy that is Rocky Horror. 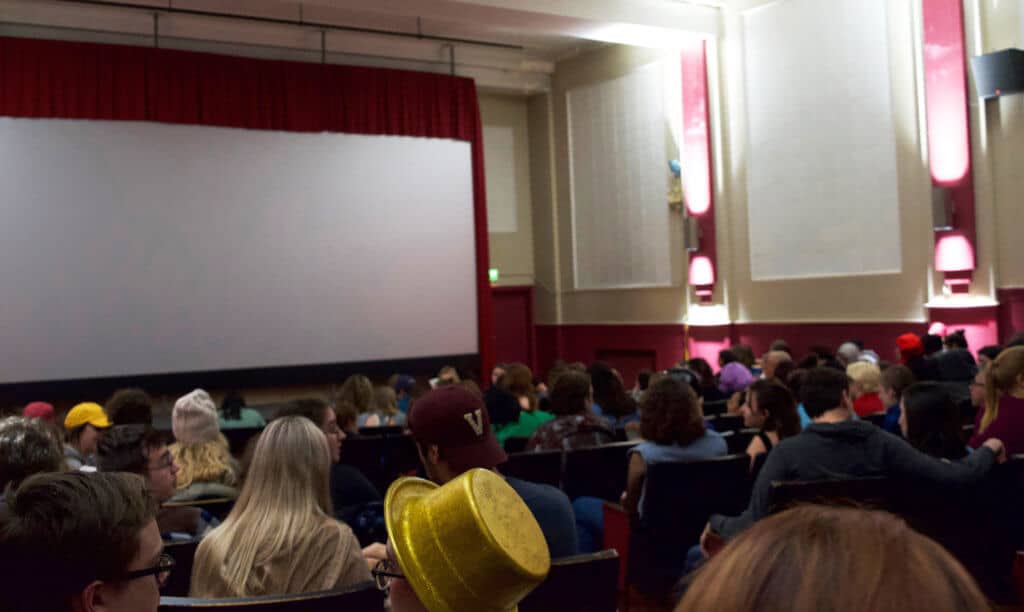 Rice was thrown, toilet paper rolls were unleashed throughout the crowd, and almost all of us had a newspaper or a party hat on our heads at one point or another. We sang and shrieked song lyrics, traditional Rocky Horror phrases and, of course, profanities in between the dialogue (and sometimes on top of it) until the ending credits.

In the midst of the Rocky Horror chaos, I couldn’t help but wonder why more movie theatre experiences can’t have this level of audience participation. Sometimes I find going to the movies is no different than staying in, sitting in the dark and watching a newly released flick. Perhaps this is why Rocky Horror is an experience unlike anything else. It oozes originality and allows people to shamelessly unleash their inner wild sides when they enter the theatre.I would recommend a full Rocky Horror experience to everyone. If you missed it this year, make sure you have your Time Warp dance moves down pat for next year, and that you’re equipped with all the props to get the full experience. Some at-home preparation is involved in order to fully participate – don’t forget the toast in the toaster! As the wise Dr. Frank N. Furter says, “Sometimes it’s not easy having a good time.”

Jane Rempel
Jane Rempel is a fourth-year English major and drama minor from the Vancouver, BC area. She has three friends and one cat.