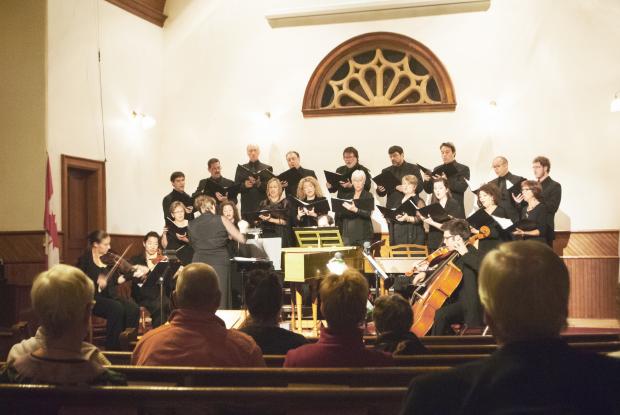 Performances send audiences back in time.

This year’s installment of the Sackville Early Music Festival attracted crowds of students and Sackville residents last weekend with a series of incredible performances that aimed to enthrall and educate its audience with the help of several Renaissance and Baroque composers. Since 2007, the Festival has operated in conjunction with the Centre for Artistic Achievement, and organization founded in 2004 that seeks to foster appreciation and recognition of classical music and art.

Featuring seasoned performers such as the talented Acadian soprano Suzie LeBlanc, as well as Linda Pearse and Gayle Martin of Mount Allison’s own Department of Music, the Festival delivered an exceptional lineup of concerts dedicated to the celebration of early music.

A humble yet passionate crowd gathered in the Mount Allison chapel on September 27, a fitting venue for a concert dedicated to the theme of love and marriage. Entitled “The Wedding Day”, the program featured a selection of Baroque and Renaissance music performed by Suzie LeBlanc (vocals), Alexander Weimann (harpsichord/organ), and Nick Halley (percussion).

LeBlanc has gained international fame with her captivating vocals and lively personality. Specializing in Early Music, LeBlanc has collaborated with many well-known musicians and continues to be active in both recording and performing.

As LeBlanc is of Acadian heritage, the evening was refreshingly bilingual, and featured two short Acadian songs, the first of which was traditionally played for the bride to help her “shed a few tears” as LeBlanc explained onstage, whereas the latter was a more upbeat and celebratory number. The addition of percussion to many of the pieces was a more contemporary choice that added a unique “folksy” and casual flair to the performances.

The program was assembled much like a traditional wedding, with more serious and religious songs by Rossi and Monteverdi comprising the first half, then moving to dances and traditional songs in the second half to represent the merriment following the wedding ceremony. This method also ensured that the audience could witness the full range of LeBlanc’s and Weimann’s musical capabilities, from deep, resonant hymns to the playful, jaunty Tarantellas of the evening’s conclusion.

The Choeur Louisbourg also performed as part of the festival on September 28, at the Middle Sackville Baptist Church. The choir, a favourite of Sackville Early Music Festival audiences, performed a repertoire of Baroques pieces by Henry Purcell and Antonio Vivaldi. The group was directed by Monique Richard, and accompanied by a small, but striking orchestra featuring violins, an alto violin, a cello and alternating violoncelle and, a harpsichord and alternating clavecin.

The use of relatively uncommon period instruments gave the performance an authentic musical aesthetic, enabling audience members to be transported to the Baroque era. The choir’s strong and resonating voices filled the church, complimented by its excellent acoustics. Baroque music is characteristically methodical, and adheres to strict rules of counterpoint featuring ascending and descending melodies filled with densely layered harmonies.  The choir respected the conventions of the pieces with careful, yet passionate intonations that conveyed strong emotions of praise and spiritual revelation.

Both the concluding event for the Sackville Early Music Festival and the opening concert in this year’s Performing Arts Series, “Venetia 1500” is a project that investigates the music and culture of Venice in the 16th century. In addition to a series of songs and pieces performed by eleven multi-talented vocalists and instrumentalists, the concert featured several poetry readings and spoken-word historical contextualization that situated the audience deep within the heart of Venetian society.

Armed with traditional instruments of the Renaissance including a shawm, lute, theorbo, Baroque violins, and a trio of sackbuts, ¡Sacabuche! filled Brunton Auditorium with the sounds of Claudio Monteverdi and Giovanni Gabrieli, in addition to three short pieces composed specifically for the event by Kevin Morse of the Department of Music at Mount Allison. Though many of these pieces celebrated and explored the rich culture of the Italian Renaissance, the concert also explicated the darker history of Italian anti-Semitism and Islamophobia in Venice, and showed respect to those persecuted or ghettoized during this period by performing a small collection of traditional Jewish and Turkish folk songs. Because the concert functioned not only as an enjoyable evening of Renaissance music but also an academic look into the history of Venice, it left the audience feeling entertained and educated and served as a perfect finale for the Sackville Early Music Festival.