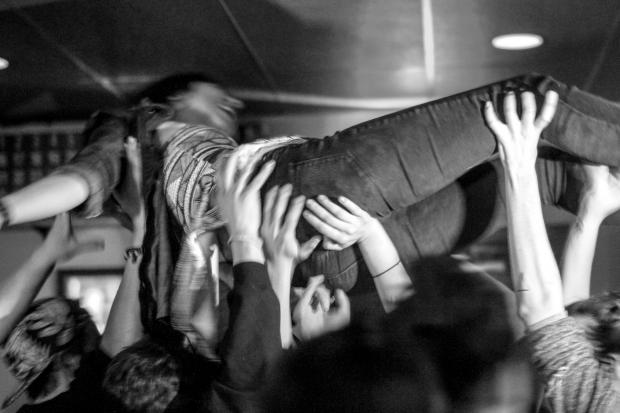 Participants to make an album in only a month.

Saturday marks the beginning of Sackville’s RPM Challenge (RPM stands for ‘record production month’). The challenge asks local musicians and music enthusiasts to take up the recording of an entirely new album within the confines of the month. Over the course of February’s twenty-eight days, participants are encouraged to write and record a ten song or thirty-five minute long album.  It requires absolutely no prior experience and can be done alone or in band in the style of any genre imaginable.

“I think the challenge of having a deadline tends to give a boost to creative output, and the non-competitive nature of the RPM challenge makes it accessible to anybody, so I’d like to think that it encourages everybody to be as creative as possible,” said Brendan Allison, who is organizing the challenge in Sackville. “Even though most people work on their projects independently, there is a collaborative aspect to it wherein everybody is working towards the same goal. Each individual project contributes to making the experience more valuable for all involved.”

The original RPM Challenge was posed by The Wire magazine to their hometown of Portsmouth, N.H., in 2006 and since then the challenge has been opened up to the entire world. In 2007, participation jumped from 165 albums to 850 completed albums produced by over 2,400 acts from places like Tokyo, Auckland, Montreal, Antarctica, and Olso. With no prizes except for a completed album to call your own, the challenge simply wishes to encourage the creation of music for music’s sake.

“Perhaps the most important thing to keep in mind when recording music at home is that it’s going to be hard to make things sound like you want them right away,” Scott Royle, who organized the Sackville challenge last February, said last year. “But it’s within these limitations that really brilliant moments of inspiration and artistry can come about. This is your chance to experiment and be crafty.”

Help is readily available from across the community and can be found on the RPM Challenge website as well.

“Don’t be afraid to ask for help on a project,” said Allison. “There are plenty of people around town with experience recording who are willing to help out. The most important thing is just to have fun with it and not worry about making a perfect album as much as trying new things and learning from the whole process.”

Recording can be done through laptop microphone, answering machine, or professional equipment; the only requirement is that the record is completed by the first of March. Meaning, it has probably never been easier to come away with a physical copy of your music.

“Last year was the first year that we did the RPM challenge in Sackville,” continued Allison, “so we didn’t expect a huge amount of people to take part, but by the end of the month there were around 10 completed projects. Everybody who took part had a great time doing it and there were some really cool songs recorded. I think the crowd favourite was “Things to Take” by Andrew, Phil and Friends. The release party at the Legion was a really good time as well.”

A compilation album of the standout songs produced from last year’s RPM Challenge can be found at sackvillerpmchallenge.bandcamp.com/album/Sackville-rpm-challenge.

Further details can be found on the Sackville RPM Challenge event on Facebook and questions can be directed to [email protected].

With files from Scott Royle.