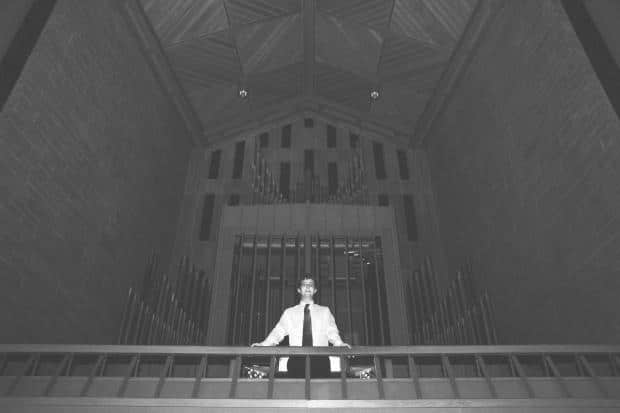 Regrettably, many have never experienced an entire recital dedicated to organ music. The sound of a church organ is one that many typically associate with sermons, or perhaps the declarative opening notes of Bach’s iconic “Toccata and Fugue in D minor.” But Shawn Potter, a celebrated organist and Mount Allison alumnus, wants the world to know how enjoyable and beautiful this instrument can be.

“It is exciting and colourful music,” said Potter, when asked about the selection of seventeenth century German pieces that make up his musical repertoire. “It can be strict and formal at one moment, and then turn around and become wild and fantastical in an instant.”

Potter also spoke about the significance of the instrument when it came to prominence in Western music from the sixteenth century. “It comes from a time when the organ was one of the most technologically advanced pieces of human ingenuity. It was a mechanical marvel,” said Potter.

On Sept. 26, Potter brought this tradition to life at the Sackville Early Music Festival, which took place throughout the weekend. Drawing from a pool of composers including Dieterich Buxtehude, Matthias Weckmann, and Johann Sebastian Bach, Potter delivered a carefully-curated concert that was as compelling as it was diverse.

Since the concert was held in the University Chapel, the space was a familiar environment for Potter, who graduated from Mt. A’s Department of Music in 2010. He was thrilled to return to Sackville to take part in the festival, as it provided an opportunity to reunite with his former professors and perform in the chapel once more.

“Acoustically, the building is an organist’s dream,” said Potter. “I spent countless mornings practicing and rehearsing in this space, and to have that opportunity again was very special.”

Potter also recalled the people and the community at Mt. A that made his experiences memorable. “I have particularly fond memories of working with the choirs at Mount Allison,” said Potter, explaining that he participated both as a chorister and as an accompanist with the Elliott Chorale and the Choral Society.

In addition to performing at numerous venues in Ontario, Québec, and even Sweden, Potter is the winner of the 2013 Royal Canadian College of Organists’ National Organ Competition. Potter reflected on the value of learning early music in the context of post-secondary education, noting that it allows one to discover new sounds and perspectives that might not otherwise be accessible to the modern listener. “I think that music from all times and places offer us something unique and new,” said Potter.

In particular, Potter commented on the historical period and the ability to see into a new world through music. “It offers a glimpse into the lives of people from different backgrounds and experiences,” he said. “It also has the power to inspire and teach, and take us places we couldn’t otherwise go.”