START exhibit asks “What’s it all for?” 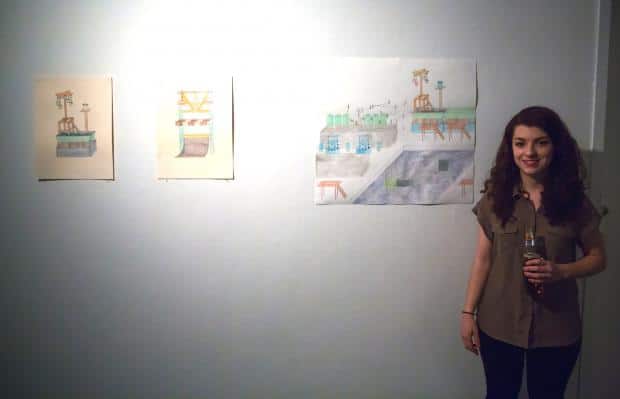 Fourth-year fine arts student Lisa Theriault loves to play around with the humorous and the ambiguous, the structured and the nonsensical. Her exhibition, “What’s It All For?”, opened at START Gallery on March 7 and constituted one of the stops on that evening’s All-Inclusive Gallery Hop.

The multimedia exhibit features a series of silkscreen prints and a projected image that depict segments of a larger contraption, forcing the viewer to gradually piece together the snapshots on their way to the completed machine. However, Theriault’s work is less about finding the true purpose of the strange apparatus, and more about employing subtle humour and disjointed geometry in order to explore the effect that machines have upon our perception of a natural environment.

Much of the project is a culmination of Theriault’s work over the last year. “I’ve always done little drawings of strange buildings up on stilts and things like that,” she said, “but I didn’t really figure out what it was about until this year.” The structures are directly inspired by industrial or mechanical processes that Theriault has deconstructed and repurposed to make them appear useless or silly. “They’re all based on things that already exist and things that I think don’t make sense; I want to create something new that doesn’t make sense.”

To a certain extent, Theriault sees her work as a commentary on what she calls “ironies” of science and technology and their potentially negative effects upon the environment and our cultural consciousness. “I think machines can sometimes be kind of useless; we feel like they help us, but really they’re kind of destroying us,” she said, envisioning her machine as an embodiment of this paradox. “I thought of it as this building [used] to study trees; [there’s] this irony of cutting down trees to make something that studies trees.”

At the same time, Theriault doesn’t want her work to appear too explicitly political. She believes that the more ambiguous or ridiculous elements of the piece serve to draw attention away from any didactic message and allow the viewer to form their own interpretations on the themes she explores.

“Humour is just a nice way to lighten it up and make it less focused on my particular opinion,” she said. “I really like when there’s just one thing out of place. That’s what really creates thinking and makes things more interesting.”

Theriault also uses a lot of detail in her work, winking playfully at the viewer, and inviting them to look for the ‘Easter eggs’ that she has strewn throughout the prints. “[There are] little added elements that I just do for fun, and if people notice it, that’s great,” she said, citing a bobby pin hidden amongst a bed of screws as just one example. “For me it’s like a fun game. I’d like people to be able to notice things differently; I think it helps people to talk about it more when they have different interpretations of it.”

Additionally, Theriault has tweaked the rules of geometry to her own artistic whims. Each print is meticulously measured to appear structured and realistic, yet entirely without the use of a vanishing point that would establish depth and perspective. “It creates this weird illusion where things that are further up could appear to be on the same plane; things don’t recede the same way,” she said. “It adds to that nonsensicalness [because] there’s more ambiguity to how things are laid out.”

Although she used to consider herself a perfectionist, Theriault has established that she is merely “careful,” as her artistic philosophy involves making mistakes and letting them drive the art to new, perhaps unintended, places. “If it gets messed up and it doesn’t make sense then I work with it. I like to start from a place of perfection and let it get messed up, then tweak it at the end so it makes sense together.”

Theriault’s exhibition can be viewed at START Gallery in the back of Struts Gallery on 7 Lorne Street until March 18.