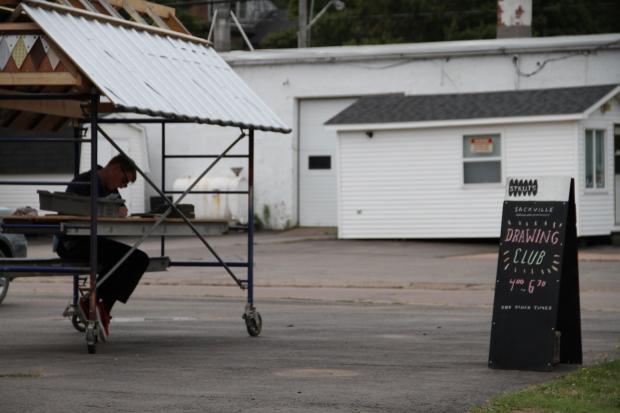 This month’s artist-in-residence at Struts Gallery is Chris Foster, a Toronto-born and Halifax-based artist whose exhibition, entitled Frontiers in Real Estate, offers a unique and intentionally discomforting look at our world and its current state of affairs. Part artist and part activist, Foster’s work is heavily concerned with confronting dark truths and realities that undergird both modern and historical human civilization.

The first of Foster’s projects includes a series of small models of old flatbed trucks with wooden houses built into their boxes, utilizing the very same architectural design that one would see in the residences of Halifax.

“I’ve been really affected by the working-class housing and traditional architectural styles in Halifax,” he says, conjuring up images of his neighbourhood around the streets of Creighton and Gottingen.

In addition to representing Foster’s own experiences with travel, these models cater to his interest in the idea of “escape and transience” and what this means to a generation of individuals who might consider the idea of ‘escaping’ as a preferable alternative to the complicated circumstances that our current society can present.

Unlike many artists, Foster’s work is frequently devoid of colours, instead operating predominantly in greyscale. In particular, his book New Civilizations is a collection of collages constructed by piecing together images of landscapes and historical photographs to form a new, seamless picture that subverts the viewer’s expectations. One of Foster’s collages consists of an oil refinery that has been photoshopped into a field next to a medieval castle. By fabricating a new “historical” black and white photograph using conflicting yet ideologically connected images, Foster aims to inflict “a little agitation” and force viewers to recognize and challenge humankind’s historical and current impact on our planet.

Foster cites his experiences with forestry in Western Canada and its environmental impact as one source of his dissatisfaction with the “status quo” and as the inspiration for much of Frontiers in Real Estate.

“[There is] a collective anxiety that has come up as our consciousness has expanded,” he explained, “and we don’t seem to be changing our day-to-day lives at all.” Despite his clear frustration with certain aspects of modern society, Foster envisions his own artwork as a medium by which he can “rock the boat a little bit” and push for meaningful change in the minds and actions of his audience.

As an artist who is purely independent in the promotion and exhibition of his work, Foster has extensively advocated for the self-representation of artists in media and print sources. To achieve this, Foster assisted in the publication of a Halifax-based art newspaper entitled The Periodical Project dedicated to promoting the city’s artists on their own terms. Although the project only produced seven quarterly issues, the last of which was released this summer, they remain in Foster’s collection as a testament to his commitment to giving aspiring artists a voice in the Halifax community.

Foster’s exhibit will be available to the viewing public from September 10 to 21, and he will additionally be co-hosting an art and poster sale on September 21 at the Black Duck.