Surf’s Up at the Legion 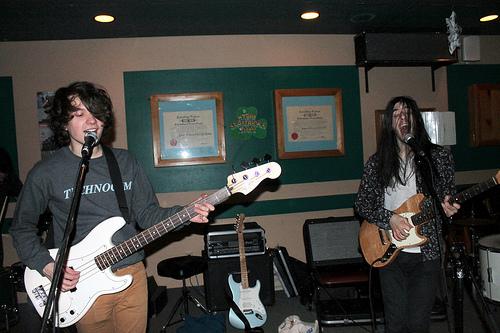 All sporting leather jackets and slinging some of the chillest rhythms these ears have come across, the Legato Vipers started off their set with “Spy vs. Spy” – a song imbued with a distinctly James Bond coolness about it. Hailing from Toronto, Ontario, Legato Vipers are  currently on an east coast tour with premiere Halifax road warriors MONOMYTH, blending surf and psych-rock with an amazing, upbeat show as the result. Friday night was the tour’s stop at Sackville’s Royal Canadian Legion, and the two groups were joined by Sackville’s own Kappa Chow, who were, as always, a treat to hear. Their uniquely garage-y baroque pop started the show off with an upbeat feel that went on to define the night.

MONOMYTH played a great variation on shoegaze, with upbeat psych-rock influences that produced a very full, robust collage of sound. Some shoegaze seems almost dragged down by the fact that it can feel too crowded, but when painted with the positive light of psych rock, MONOMYTH’s has really captured something special in their sound. The depth adds excitement, with the sheer amount of musical layers producing something that can be listened to again and again. Their live show is a special treat indeed. The set they played did not disappoint, with finishing number “Feeling” a personal favourite.

The rest of the Legato Vipers’ set kept the cool at a consistently high level, complete with the shake, jangle, and roll that all good surf-rock is just asking for. The fast-paced, high energy music proved itself to be the perfect finale to the night. The Vipers’ music possesses an Ennio Morricone twang that seemed to fit perfectly into the pocket of these leather-jacketed cowboys of surf, calling to mind images of rolling waves crashing into long sandy beaches, or Clint Eastwood walking through the desert.  With spring on the horizon, this summer themed music on display by each of the bands expertly hit the spot, turning the legion into a haven of summer warmth untouched by the cold winter night outside.

If you missed the show, make sure to check out Legato Vipers’ and MONOMYTH’s bandcamps. The Vipers have some great merch on there, not limited to leather flasks and switchblade combs. Also, make sure to keep an eye for more Kappa Chow shows around Sackville.