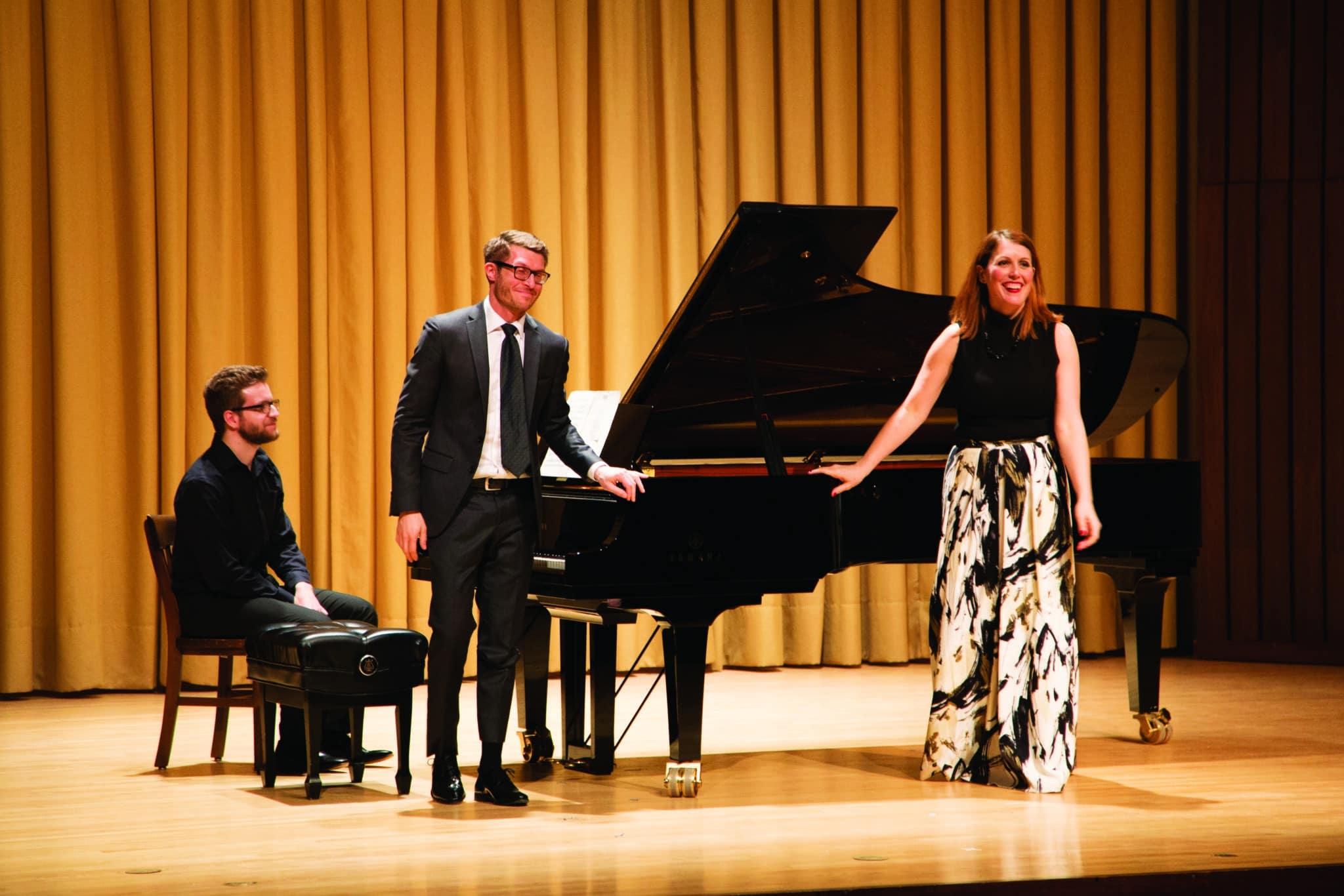 Last week, Mount Allison voice majors had the opportunity to learn from established mezzo-soprano Krizstina Szabó. The event included an inspiring and impressive recital, as well as an informative masterclass. The class offered six voice students the opportunities to sing for her and receive insightful advice on stage presence, effective breathing and interpretation techniques.

“It was such a treat to hear such an expressive, powerful and professional voice in Brunton, but it was also an honour to work with her in the masterclass she held,” third-year voice student Morgan Reid said.

Szabó’s recital exposed voice students to a hand-picked repertoire that ranged from Baroque works, French songs and songs connected to her Hungarian heritage, to more contemporary works such as cabaret songs.

“[Szabó] has such an amazing interpretation of character, atmosphere and expression in her performances that anyone could learn a multitude of things from attending,” Reid said. “She captured every moment both in the expressive tone in her voice and her physicality. She embodied every character and text she performed, regardless of era or genre.”

The program began with two beautiful works by Henry Purcell, “If Music Be the Food of Love” and “Sweeter than Rose (from Pausanias),” arranged by Benjamin Britten. Szabó’s effortless tone  complemented her expressive phrasing.

To close the first half of the show, Szabó performed eight songs from Johannes Brahms’ Zigeunnerlieder, Opus 103, a set of 11 Romani songs. Exceptionally showcasing her versatility as a singer, Szabó’s performance switched from dark and sombre to light-hearted and playful as she depicted different characters for each song.

Through an attentive piano accompaniment, music department head Stephen Runge remarkably supported the differences of each movement. In this set, it was clear that text is of foremost importance in her singing, naturally making every song she sang engaging.

“What made the entire performance was the fact that she perfectly portrayed every single word that she sang. No matter what language she was singing in, she used her facial and bodily expressions to make sure every person in the audience understood what the words meant,” third-year voice student Madeline Duffy said.

“I was impressed with her ability to move her body around for expression – from waving her arms to jumping up and down – while maintaining stellar vocal production,”Duffy said.

The second half featured more modern works, with compositions by Xavier Montsalvatge and Arnold Schoenberg. During the songs from Montsalvatge’s Cinco canciones negras, Szabó often hummed along. In these moments, audience members witnessed her passionate intensity and her amazing ability to storytell.

The recital concluded in a fun and humorous way, with four songs from Schoenberg’s set of eight cabaret songs, Brettl-Lieder. Szabó’s talent for storytelling and acting was highlighted in the concluding aria from The Mirror of Arcadia. Her exuberant acting entailed running out of breath and jumping and clapping on stage, and resulted in a well-deserved standing ovation from the audience.

“The audience was both laughing [at] her humour and having their heartstrings tugged by the beauty of her voice,” Reid said. “Despite her powerful presence and obvious star status in the opera world, she was incredibly kind, humble and thankful to be at Mt. A.”

“I loved every second of it – the tremendous diversity of repertoire and the skillfulness with which she sang everything,” second-year voice student Emily Steers said. “She was a powerhouse and I feel so incredibly lucky that we at Mt. A were able to host such a high-calibre musician.”