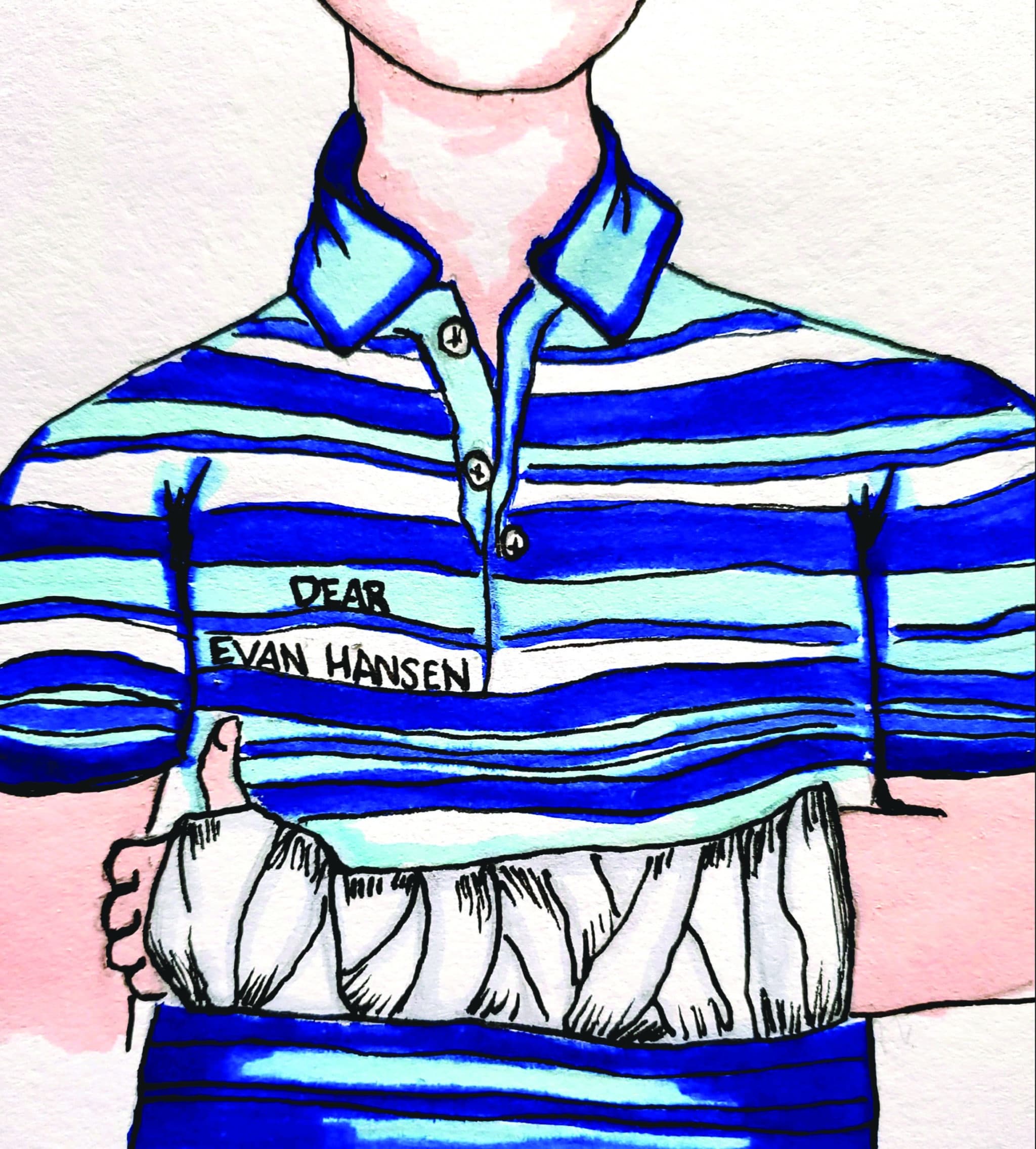 Dear Evan Hansen has become one of the most popular musicals of the past decade. It is inspirational because of its representation of mental illness and its ability to give voice to those who are lost. Then the movie adaptation came along and ruined that for me. I am a huge fan of the musical, and I love the book; all of what I am about to write is my own opinion.

The story is about a high schooler named Evan Hansen who has severe social anxiety. He gets caught up in a lie after the Murphy family mistakes Evan’s letter to himself for their son Connor’s suicide note.

The first warning sign was when the studio said that if Ben Platt (who played Evan in the original Broadway production) was not able to look young enough to play Evan Hansen, they would not continue with the film. They should have stuck to their word because Platt looks like a grown man in an Annie wig. It is off-putting to say the least. He looks like a glowed-up version of Benji from Pitch Perfect (you know, when he was actually young). Even casting one of the younger actors who played Evan Hansen on Broadway (like Andrew Feldman) would have been a better alternative if they really wanted to make this train wreck.

The opening song for the movie is “Waving Through A Window,” and I have just one word for it: no. They did this song dirty, and it breaks my heart. It was the most lifeless and emotionless rendition of this song I have ever seen, which is funny because the whole point of it is  Evan’s desperation to be seen. Ben Platt looked like he was trying to remember the missing item from his grocery list throughout the entire song. This was the biggest faux pas: the fact that they missed the entire meaning of the song. The nuance of Evan feeling socially isolated from his peers and wanting to reach out but not being able to because he is so debilitated by his social anxiety is missing. The song is a cry for help that falls on deaf ears because he can not reach out, but the movie has him staring out his window and at his peers that reads as creepy rather than sad. This song is one of if not the most iconic songs in the musical, and they misunderstood the message and emotions behind it which leaves it feeling pointless.

Evan is oddly subdued throughout the film, even in scenes where he is supposed to be animated. In the number “For Forever,” Evan begins spinning his web of lies by telling the Murphys about his grand adventure to an apple orchard with Connor, basically creating the “ideal scenario” for his fall from a tree (i.e. someone being there for him). In the musical he stands, he gestures, he excitedly uses the information that the others contribute to make this imagined story come to life. He is energetic and passionate because he is living an experience he wishes he had. While in the film, Evan stares at his hands, remains seated for most of the song, avoids eye contact with them, he does not connect with the Murphys. Throughout the musical Evan builds this bravado because he is finally getting seen, he’s getting noticed by and connecting with others and this bravado eventually leads to his downfall and a satisfying resolution. Whereas in the film, he does nothing, he does not grow, he does not change at all which impacts the whole story. In the moments where we are supposed to feel something towards Evan Hansen, the audience feels even more disconnected because it is so disjointed and emotionless. In fact, Ben Platt’s performance in the movie is like bran, bland and nothing special. The fact that Evan is so completely void of emotion makes this a lacking characterization of him to the extent that if it were not for the rest of the cast he may as well be a background character. The movie could be titled anything else and still work; that is how little Evan actually influences everything around him. Alana Beck is one of the characters whose original song is a good addition because it develops her own struggles that are hinted at but never greatly touched on in the musical. Her song is well done and actually carries emotion behind it; you can feel the somberness behind her song and how desperately she wants to be seen. The song also has a really powerful message behind it, encouraging us to look for the secrets that everyone hides, meaning that not everyone is as okay as they seem. She really becomes a powerhouse throughout the film, driving forward most of the plot and creating the idea for the Connor Project. She is basically the unspoken protagonist of the movie and is easier to sympathize with than Evan is, despite the mistakes she makes. Amandla Stenberg, who plays Alana, does a fantastic job of bringing the character to life.

The second most famous song, “You Will Be Found,” was actually done nicely, but the song was already powerful on its own: the message, the voices, and everything else was already incredible. Even for the Dear Evan Hansen movie it would be a hard scene to mess up because the emotion is built into it. However, what is lacking is the motivation behind “You Will Be Found.” This is where Alana’s song falls short. “Disappear” is the original song that precedes “You Will Be Found” in the musical. “Disappear” provides the inspiration for the Connor Project and the message for “You Will Be Found” because the Connor Project is losing importance. “Disappear” acknowledges that people should not be made to slip through the cracks, and everyone deserves a chance to be seen, heard, and loved. While Alana’s song is powerful, it feels almost stunted. Even though it provides more insight into Alana’s character (which I fully support), it disregards the original plot, and Evan’s role in creating the Connor project. It does not provide any context for how she came up with the project nor why she is doing it.

Another song cut from the movie, “Good For You” served a similar purpose in furthering the plot. In the movie, Evan does not follow the same character development as he does in the musical or even the book. Evan gets so wrapped up in the lies he’s created that he loses sight of everything. “Good For You” is supposed to be Evan getting his just desserts and realizing that he has hurt countless people in his misguided quest for something he never had, whereas in the film, Evan shows very little character growth and continues to act as he did at the beginning of the film. He did everything to cover up who he was and reinvent himself in a way that sheds a more positive light on his character in the musical: he did it for the glory, he did it for Zoe, he did it for connections. But in the movie none of that is ever explicit. It is for this reason that the song “Words Fail,” which is, in my opinion, his requiem and apology for his actions, falls short. It does not have the same momentum behind it that it is meant to. Evan is simply the movie’s titular character and his role in the film is completely negated. The insignificance of his character leaves the movie feeling hollow and empty. It lacks the heart that the musical became famous for.