The process behind the production 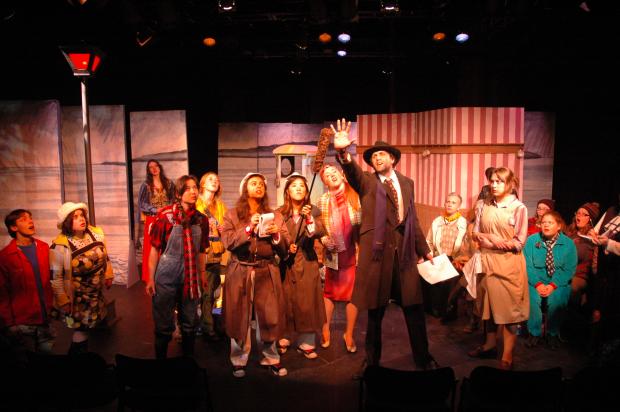 A backstage look at Tintamarre’s Villages.

Since the troupe’s inception in the late 1960s, Tintamarre has created and performed a wide variety of bilingual comedies that engages with contemporary issues, while providing an environment for students to learn about theatre and language. The group’s most recent production, Villages, has been praised by audiences and performers alike, proving this unique organization’s value to Mt. A and the Sackville community.

Directed and coordinated by Alex Fancy, the production premiered on the weekend of March 20. Villages, which is set in the humble Café du Quai in the fictional mainland town of Port-à-Petit, brings a diverse collection of characters and personalities to the stage that simultaneously clash and complement one another. As the authorities threaten to close the nearby island of Hurlevent while the Kappa City media sensationalizes the brewing division, Hurleventeurs and Port-à-Petitiens learn to respect each others’ regional identities in order to confront their imminent social and political situation.

The troupe is currently preparing for their annual Tintamarrathon tour in May, in which they will travel to several schools around New Brunswick and Nova Scotia to perform a condensed version of Villages and conduct a theatre workshop with students. “Anyone who has toured will say this is a unique experience, as they meet more than three thousand students at various levels and in two provinces,” Fancy said.

At the very heart of Tintamarre lies the spirit of collaboration and cooperation, as the story and characters are developed as a group through a unique improvisational process. Students are encouraged to build upon each others’ ideas and flesh out the characters they portray. “It takes a village to make a play,” Fancy said. “There’s nothing like witnessing the ownership and pride of actors playing characters they helped to create.”

For many of the play’s actors and actresses, conceptualizing their characters was as introspective as it was creative. Natasha Kilfoil, who portrayed the enigmatic figure de proue, spoke about Tintamarre’s improvisational exercises as a “cure” for shyness. By joining Tintamarre, she explains, she gradually became more comfortable with herself on stage and confident as a performer.

“It’s been a drastic change,” says Kilfoil. “Now I don’t even remember what it’s like to not be comfortable with [performing].” She also believes that Tintamarre has changed the way she sees herself as an individual, as she feels more confident with expanding her own boundaries. “It’s very healthy to learn how to be a goof without feeling like you’re diminishing your own self-worth.”

One of Tintamarre’s primary goals is to help students engage in both English and French within a safe and creative environment.

“Tintamarre brings together people whose levels of fluency vary greatly,” says Fancy. “We celebrate our differences and we all learn from each other.”

Bernard Soubry, who graduated last year, values the opportunity to “use his mother tongue” at Mt.A. “[Tintamarre] taught me that language isn’t a barrier to be surmounted,” says Soubry, “It’s something to be played with, even as you learn.”

Soubry is proof that Tintamarre’s magnetic effect goes beyond the university itself; despite completing his degree at Mt.A, he has continued to work with the theatre troupe on the production of Villages. After being involved with Tintamarre since 2010, he couldn’t help but return to help out with the recent production. “I come back to Tintamarre again and again,” Soubry said, “because I knew it was a welcoming space. It felt like I was coming back to family, each and every time.”

Cate Spiers, who took part in Villages as well as Tintamarre’s production of ALBUM in 2013, said that recurring elements and jokes are often added to the script each year to spark extra laughs from returning audience members.

“We always make references to previous plays, previous characters and conflicts,” she explains. Spiers also says this ongoing process helps to foster a community of familiarity and encourage returning students to contribute to the broader narrative.

“I was really happy with last year’s production, and this year I felt much more confident with voicing my opinions.”

Fancy said he is looking forward to creating and directing the next instalment of Tintamarre in September. “Next year we will, in all likelihood, visit the island [of Hurlevent] as a route to environmental awareness and economic viability,” he said, encouraging newcomers to get involved with the powerful project that is Tintamarre. “Come to at least two rehearsals, and know that your friends are waiting for you.”