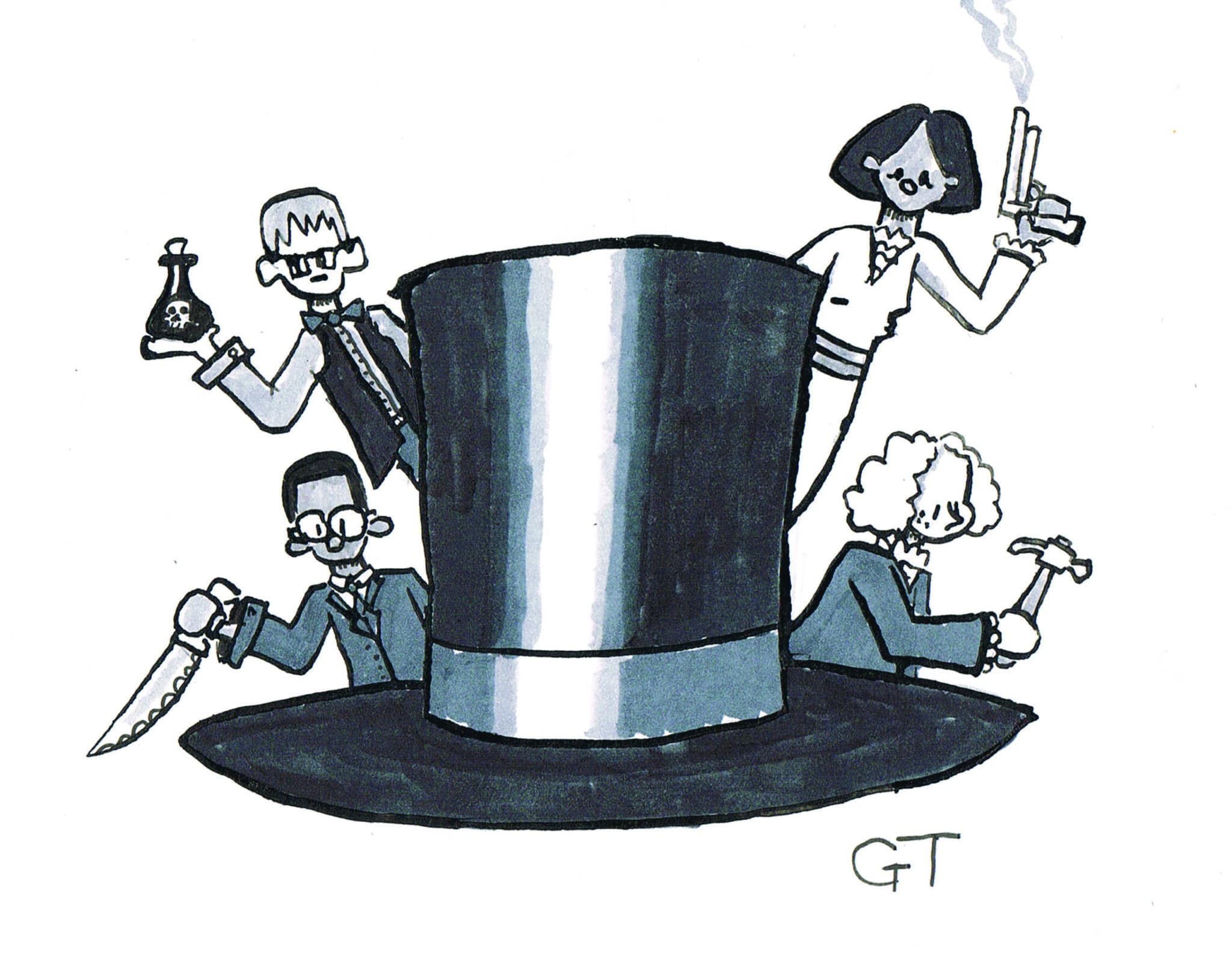 The Motyer-Fancy Theatre’s first production of the school year, A Gentleman’s Guide to Love and Murder, was a thrilling, chilling success. I was lucky enough to be a member of the audience on Thursday night, and though we were socially distanced and masked, it felt like the fullest house I’d sat in for years—full of lively voices, laughter, and people who were incredibly excited to get back into seats at the theatre.

The show was nothing short of a spectacle. Technically, the piece was well-planned and creatively, carefully designed. The set was beautifully constructed and divinely painted. The theatre’s deck was painted like a picture frame to aid the storytelling effect of the plot while keeping the actors socially distanced from the audience.

The acoustics in the play were spine-chilling. The piece featured live music—yes, real live music! Every performer on the stage was responsible for singing a piece of the show’s beautiful score, with music direction by Lauryn MacDonald. She also directed the live pit band, which sounded not only gorgeous, but very professional.

Alongside MacDonald was a fantastic creative team who put an indescribable amount of work into bringing the story to the stage, and it showed. Paul Del Motte, who directed the piece, has directed many beloved musicals in the space, including 2018’s Assassins, 2019’s Godspell, and 2020’s Fun Home. Del Motte’s plays (and the way that they are performed) are consistently quick-witted and immersive, and there is a sense that you are a part of the story, not just watching it unfold. This immersiveness can be difficult to portray, but Del Motte never fails to bring the audience to its feet at the end of his shows. The show is a perfect example of a British comedy; it has the audience cackling thanks to his direction.

Julia Kim, the theatre’s new Resident Designer, brought Sibella Hallward’s famous bright pink dresses and Monty Navarro’s lush green chaise lounge to the stage as the costume and set designer. The show, at its core, was visually beautiful, thanks to Kim. This thanks is also extended to the sound and lighting designers, Matthew Cann and Rowan White, who aided the process of bringing the show to life.

The impressive show could not be complete without its talented cast. To say I was mind-blown would be an understatement. The main cast that included two first-year students and another student who was performing on the Motyer-Fancy Theatre’s stage for the first time, brought an unimaginable amount of talent and life to the stage. First-year student Jacob Farrell gave the lead, Monty Navarro, his quick wit and charm. The second first-year to join the main cast, Maika Branch, stunned the audience with her vocal range and audience-engaging performance. Paul Brisk Jr., a Motyer-Fancy veteran, had the impressive role of playing nine(!) different characters while completing quick changes and appearing in different areas of the stage. His performance was on-the-nose and just plain hilarious, leaving the audience in stitches. Emma Yee and Amanda Godin brought nuance to their characters—the love interests Sibella and Phoebe This was such a butane that is rare for female characters in theatre, which was refreshing.

The six-person chorus tied the production together and aided the plot by providing beautiful music at the top of each act. Though each member of the chorus brought their own fantastic story to life, I was particularly blown away by the performance of Molly Dysart. Dysart was a member of the chorus, and she played a minor character with an impressive number of lines in the second act. She also choreographed and assistant directed the show alongside Del Motte. Her beautiful performance and dedication to her craft gave her character a special place on the stage.

All in all, the play was not one to be missed. Spooky, scary, and full of hilarity, it brought the socially-distanced crowd together for a bone-chilling laugh and a fantastic evening.

Re: Turn 2 Community: Mt. A does Culture Days: Students from the Arts and Culture Marketing Course Hosts 8th Culture Days