CAPP has no place at The Walrus Talks 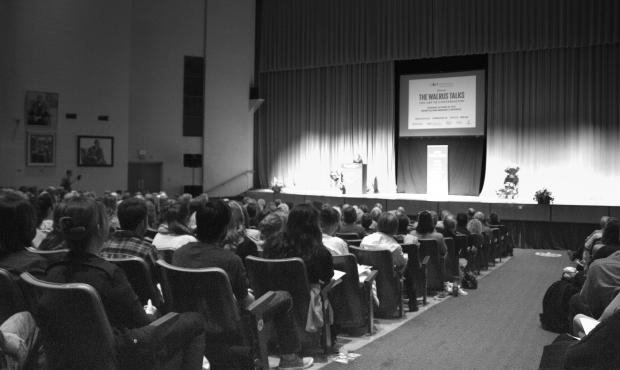 There’s an ideological war being waged across Canada – it has even reached Sackville. If you don’t know who CAPP is, you’re probably a target.

Last week’s Discourse and Dynamics conference kicked off with a surprise appearance from Canada’s biggest oil and gas lobby group. Among the first speakers at The Walrus Talks, the conference’s opening event, was a friendly-looking woman from the Canadian Association of Petroleum Producers. She was given about five minutes to explain how the oil and gas industry is “constantly engaged in conversations” with the Canadian public. CAPP was also the only funder verbally thanked at the end of the event.

CAPP has almost nothing to add to a conversation about “Canadian women as public intellectuals,” the theme of the conference. According to their website, CAPP is “the voice of Canada’s upstream oil and natural gas industry,” a coalition of petroleum extraction companies in the oil sands and elsewhere. CAPP lobbies the Canadian government and public on behalf of its members, such as Shell, Syncrude, and ExxonMobil. Presumably, to be given such prominent time at the mic, CAPP must have been a major funder of The Walrus Talks. A quick browse through any volume of The Walrus magazine, and it becomes clear that CAPP also spends a lot of advertising budget there.

Why would CAPP target The Walrus and Mount Allison? They are both fairly liberal institutions – a strange relationship for a Calgary-based gang of oil barons. The Walrus’ audience was mostly comprised of well-educated, upper-middle class and thoughtful people. They are not deeply engaged in environmental issues, the ‘Canadian political class,’ if you will. Interestingly, this is the same demographic that many (though not all) Mt. A students fit into. If I were an oil company executive, these are the people I’d want to access in a one-sided “conversation,” for which the talk provided an opportunity.

Should events on campus and by extension our university, accept strings-attached money from Big Bitumen? It’s not uncommon for Mt. A groups to turn down oil sands money. EcoAction, for example, has repeatedly refused Enbridge’s offers to fund the annual Campus Climate Challenge. It’s also becoming common for universities to pull their money from fossil fuels, which are sometimes seen as risky and unethical investments. Last May, Stanford announced its divestment from coal, joining twelve other US colleges that have voluntarily shifted their endowments away from fossil energy. The movement went global just this month, with divestment announced at the University of Glasgow and Australian National University. There’s a student club on campus lobbying Mt. A to become the Canadian leader in divestment.

Do you agree with CAPP’s one-sided “conversation?” Are the oil sands a safe, sustainable, ethical resource which should be exploited with both hands?

I’m not unbiased. I think the oil sands are a pollution-intensive, human rights abusing, boom-and-bust economy with industry-set regulations, catastrophically deficient infrastructure with a high concentration of deformed fish (just ask aboriginal groups living downstream). Although, I’m not the one CAPP is trying to convince. You are.

So don’t take my word for it and don’t take CAPP’s. The Oil Sands are going to fundamentally change Canada’s future. Make up your own mind about them; if you don’t, CAPP will gladly make it up for you.