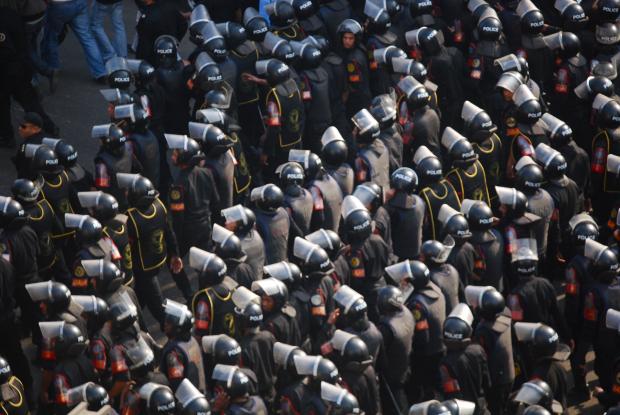 Foreign Affairs Minister John Baird returned to Canada last week from a three-day diplomatic tour of Egypt and the Middle East. Most of the press coverage of the tour concentrated on what Baird was unable to accomplish: the release of Egyptian-Canadian journalist Mohamed Fahmy. However, according to Baird, the trip to Egypt was a diplomatic success and he announced several initiatives designed to promote Egypt’s stability, security and economic growth.

While in Egypt, Baird promised to support Canadian NGOs working in the region, such as Save the Children Canada, which is working to provide education to Egyptian and Syrian children living in Egypt’s refugee camps. Baird stressed the importance of fostering human rights in the volatile region, but it is difficult to reconcile Baird’s concern for human rights with his ongoing support of the Egyptian police.

Since the overthrow of Egypt’s democratically elected government in the summer of 2013, the actions of the Egyptian police have been criticized by a host of independent observers, including Human Rights Watch, Amnesty International and the International Coalition for Freedoms and Rights. Over the last year and a half, all three organizations have made it a priority to monitor the actions of the police and security forces operating under Egyptian President Abdel Fattah el-Sisi’s autocratic regime. Their findings have been shocking.

Last year, Human Rights Watch released a 188-page report covering the Egyptian state’s backlash against the largely peaceful protesters voicing their discontent with President el-Sisi’s military coup. The most horrific example of police brutality examined in the report occurred on Aug. 17, 2013, when the Egyptian police used armoured vehicles, helicopters and assault rifles to deter as many as 85,000 protesters from Cairo’s Rab’a al-Adawiya and al-Nahda Squares.

Within twelve hours, Human Rights Watch estimated that the Egyptian police killed at least 817 protesters, while noting that hundreds more were allegedly executed in police custody or killed while fleeing from the massacre.

In contravention of international law, the police offered no respite for the injured or those attempting to treat the injured. Human Rights Watch said that, “Security forces from the morning fired at makeshift medical facilities and positioned snipers to fire on those who sought to enter or exit Rab’a hospital.”

Since the Rab’a Square massacre, there have been no public demonstrations against the el-Sisi regime of a comparable scale. However, Amnesty International continues to report incidences of Egyptians being tortured and deprived of medical treatment while in police custody. As recently as November 2014, Egyptian security forces evicted over 1,000 families from their homes in Rafah in North Sinai in order to improve border security. Once again, this forced eviction contravened national and international statutes.

Yet, despite these ongoing human rights violations perpetrated by the Egyptian security forces, Canada has committed $2.1 million to strengthen Egyptian law enforcement capacity. The Canadian government claims that the initiative is designed to prevent cross-border terrorism, but seems willing to turn a blind eye toward the acts of terror perpetrated by the Egyptian state. It is blatantly hypocritical for the Canadian government to promise support to NGOs operating in Egyptian refugee camps, while simultaneously providing financial backing for a regime that is evicting citizens from their homes. It is time that the Canadian government realized that regional security should not be maintained through state violence and that stability should never come at the expense of human rights.