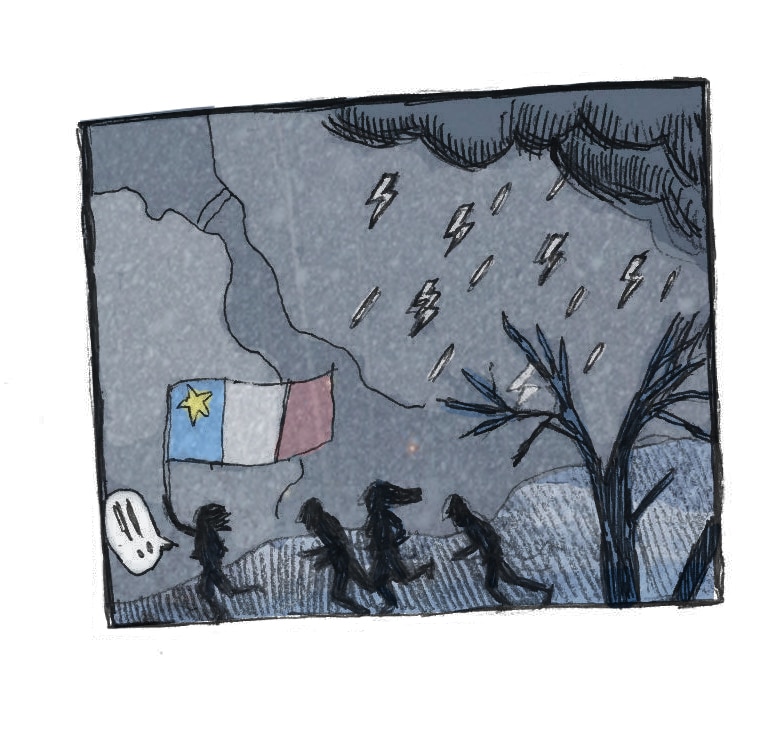 I came to Mount Allison in order to escape the confinements of my Acadian culture. I had grown to resent the Acadian flag, anthems and everything in-between. I thought that by rejecting my language and my upbringing, I would find something better at this English university. Five years later, who knew that in attempting to sedate my very culture, I would find something better: a deep pride, developing understanding and never-ending curiosity for l’Acadie. If I were to do it all over again, there are three things I would do differently to avoid pain, rejection and alienation. So listen up Acadians, because here are three things I learned on how to be a kick-ass Acadian in an English town.

One, during your time here, do not turn your Acadienté into a joke. Of course, your close friends, if they are lucky, will visit your home town where your mom will force them to speak words they’ve never spoken. You’ll have a few laughs over it. Embrace that. This isn’t a joke, it’s a type of sharing, and it feels incredible. It’s something special, and you shouldn’t have to share it with everyone. If you find yourself stumbling on your words in a tutorial or in front of a group, your first thought might be to break into the standard “Awh, I’m Acadian,” but don’t. In those situations, ask yourself if making others feel good at the expense of you feeling less awkward is minimizing your culture or not. If so, I challenge you to change that. Instead of making a joke, feel that discomfort, embrace it, find the words you’re looking for and move on.

Two, there are so many books on l’Acadie. Pick one up. Honestly, just pick up anything Acadien and read it. We might learn about the deportation growing up, but that is not enough. Understanding the beginnings of our culture is as important as understanding the genocidal parts of it. Read up on treaties, stories, legends and most importantly, talk to people. Acadian people. Mi’kmaq people. English people. People who played a role in the very foundation of our rebel culture. The people that were, for the most part, written out of our textbooks. Ask them questions and learn from them.

Three, there aren’t many of us here in la ville de sac, so you’ll often find yourself in situations where you are the spokesperson for l’Acadie. I know that’s daunting, especially when you’re still learning yourself, but don’t panic and don’t be afraid to speak up. Keep in mind though that sharing a few pictures of le quinzou des fous might not be wrong, but is not enough. We have such a rich history, and Sackville is part of it, so speak up! In speaking up, though, you’ll find people with different perspectives on our history. Listen to them, but never let them silence you.

Five years later, the burning maris stella in my heart drives me to further research, love and stand up for my Acadie. I am so grateful that despite my efforts, I was not able to sedate this part of my life, and I hope you don’t either. For the future Acadien(ne)s who walk the rainy streets of Sackville, you need to know that you don’t have to wait until the end of your degree, or wait for someone to accuse our culture of being phony, or wait for someone to say our ancestors were traitors to speak up. Don’t wait, because you might end up mourning the person you could have been at this school. Halle ta frame, ouvre un livre, pis baille-y ca!