On the successful amplification of campus outrage 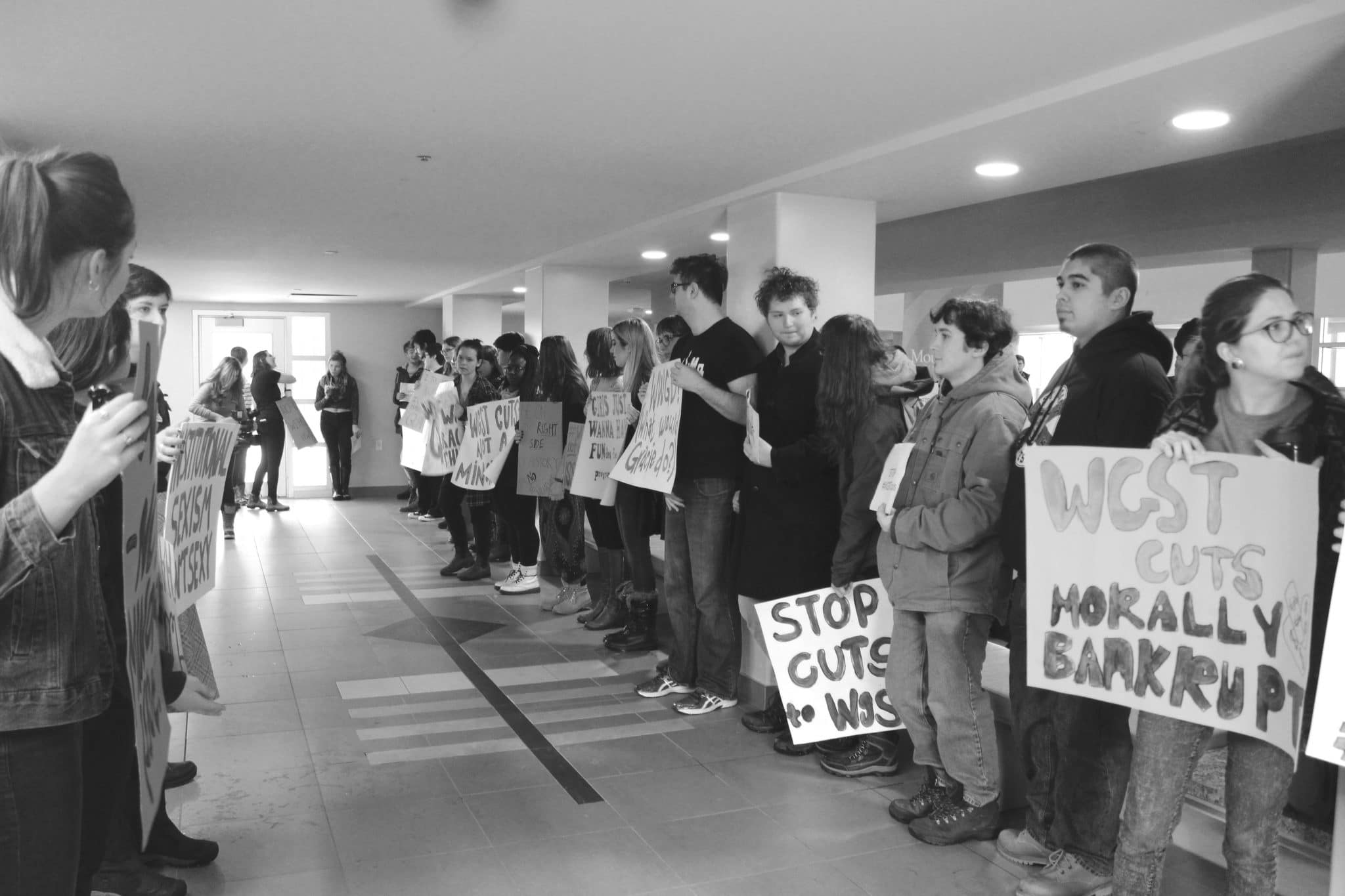 How quick action helped the opposition to WGST cuts

It’s been a tumultuous week-and-a-half on campus at Mount Allison. Short of perhaps the faculty strike in 2014, I haven’t seen tensions as high between administrators and faculty, and I’ve certainly never seen students as angry and upset as we have been over the news that the budget line for a full-time women’s and gender Studies (WGST) professor was being cut.

This has attracted quite a bit of attention outside of Sackville as well. The CBC, CTV, Buzzfeed and the Huffington Post have been joined in publishing articles by smaller sources, too. Halifax’s alt-weekly The Coast had some excellent coverage, and a number of online feminist publications published pieces as well.

The message of the protestors was certainly amplified by these online sources and the #WGSTcuts hashtag on Twitter. The trick, as always, was to generate enough online traffic surrounding the issue before major media outlets became interested. Because of the quick response to the news that there was no funding allocated in the coming budget, those who opposed the cuts essentially controlled the discourse that was later picked up by media organizations.

It’s worth noting that some of the outlets above, particularly the ones without a stated mission to provide activist journalism, didn’t necessarily have the best of intentions in mind. I’m sure they’re aware that angry, hateful commenters who think the program should be totally de-funded will drive a sizable chunk of the traffic to their site. Regardless, the coverage itself amplified the action taken in Sackville, and I think part of the reason for that was the immediacy and clarity with which the WGST instructors and students responded to the news of the de-funding.

One such reason was the petition, which ended up being a successful strategic move. It allowed the protestors to dominate online discussion of the issue in a way that very clearly indicated how many people – both inside and outside the university – were upset about the cuts. Even in its title, it was framed as a call to media organizations to amplify its message.

That wasn’t the end of the online presence. Faculty wrote blog posts contextualizing the cuts and published open letters to the administration, and the display of unity between faculty, librarians and students in the form of these letters has been effective in demonstrating popular sentiment.

The open letter posted on the “mtawgstfaculty” WordPress site is extremely critical of the ad-ministration’s response, and nicely sums up the thrust of most of my columns: “The mission of the university in society is not to manage perceptions of the world through the clever distortions of media spin but to foster the critical capacities for which this kind of distorted communication has no power.”

Even setting aside the veracity of the response of the administration, it was both too slow and poorly toned. There is certainly something to be said for carefully preparing public statements, but while students online continued to analyze and discuss their experiences with the program, the admin. took their time in responding. The importance of this program would be obvious to anyone who took the time to see what the students – especially the women who have been a part of the department – have been saying.

When the administration did respond, it was seriously mishandled. Mt. A Dean of Arts Hans vanderLeest’s email was brusque and charmless, which I think further inflamed opinions about the administration’s actions. It’s a fairly substantial mistake to give the impression to a large group of angry people that their complaints are inconveniencing you. The FAQ circulated by the marketing and communications office was better, even if its only real message was “everything remains on the table.”

Given the relative passivity of students throughout my four years at Mt. A, the response has been impressive. The unity across campus and the use of outside support is a model worth emulating in the face of future cuts and reallocation of funds. In the coming weeks, the most important thing for this movement is to keep the pressure on the administration, the Board of Regents and the media to ensure that the administration doesn’t outmaneuver students by simply waiting them out.

Disclosure: The opinions section editor, Katharyn Stevenson, is the president of the women’s and gender studies society and was the main subject of most of the media interviews about the WGST cuts.

Additionally, I should disclose that I support and participated in the protests in favour of reinstating full funding to the women’s and gender studies department. The importance of preserving a department dedicated to critical thought and social justice, and the importance of fighting to retain full-time, tenured, and well-compensated faculty positions when a faculty member retires or dies are issues that are too important for anyone feign objectivity about.