Our university, our planet, our future 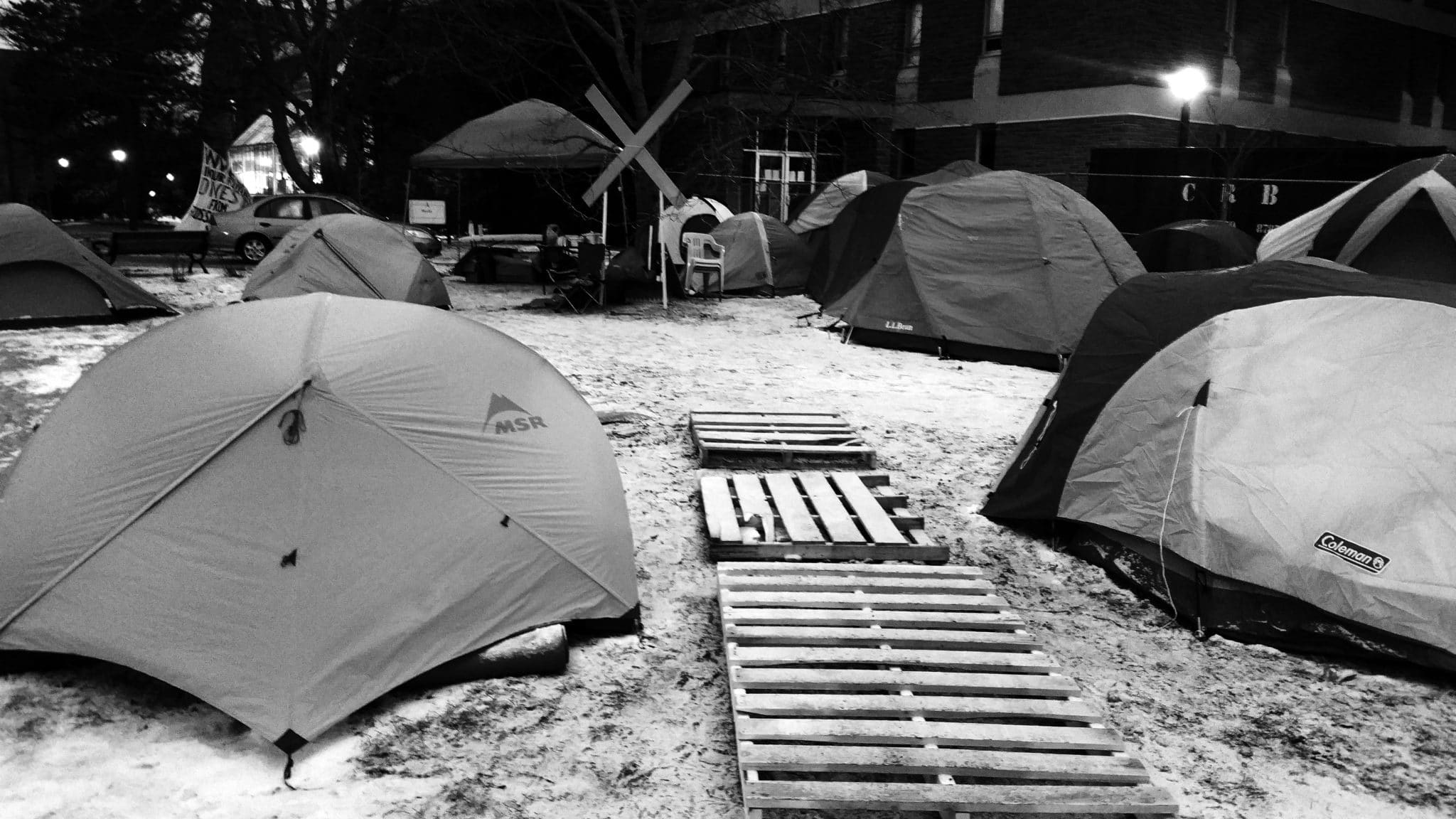 It’s no secret that Sackville is cold in March. The sun rarely shines during the day, it snows sporadically, the wind blows hard and cold and at night, the temperature falls well below zero. Despite these harsh conditions, student activists have occupied campus since Monday.

We are students, all of whom have heavy course loads, extracurricular responsibilities, and our personal wellbeing to care for. We are students spending our days outside together with community members, professors and Indigenous leaders. At the camp, we spend our days talking, reading, chanting, singing, listening and yes, sleeping. We do this because for four years now, our voices have gone unheard by this university’s administration.

Fossil fuel divestment has been a topic of conversation at Mt. A since the fall of 2013, when students founded DivestMTA and challenged this university to live up to its claim of being a leading institution in the fight against climate change.

Last month, approximately 60 students disrupted the Board of Regents meeting, calling for the same things that DivestMTA has been demanding for the past four years: Invest in our future, divest from fossil fuels. We ask that this university place itself on the right side of this historical battle against the injustices, violence and oppression that climate change causes, and cease its investment in the very industry that, if left to its own devices, will undoubtedly cause our demise as a species.

Following the die-in on Feb. 3, university administration doubled down on its rejection of fossil fuel divestment, citing the same reasoning it always has: This institution’s fiduciary responsibility to financial stakeholders is paramount to all else, and fossil fuel divestment puts this at risk.

This reasoning is fallacious. Not only is there no evidence to back up the claim that fossil fuel divestment would be detrimental to endowment fund returns (hundreds of universities, pensions, churches, abd cities have divested with negligible changes to financial returns), but, frankly, Mt. A’s responsibility is not first and foremost to donors. Its responsibility is to us, to the students who fill the lecture halls, labs, libraries and residences. We are this institution’s most important stakeholders, and we demand divestment. For Mt. A to do anything less is to commit millions to death at the hands of the fossil fuel companies it so dearly refuses to give up.

We do not act alone. We are part of a movement that in Canada alone is comprised of thousands. The climate justice movement is expanding rapidly, including social justice organizations, Indigenous communities, religious groups and yes – student divestment activists.

There are 30 Canadian universities with student-led fossil fuel divestment campaigns and just last month, we got our first win. Université Laval was the first Canadian university to commit to divesting its financial holdings from the fossil fuel industry, and it will not be the last. Although Mt. A will not be the first university in this land we call Canada to move to divest, we know that it cannot deny the reality of climate change forever. We believe that Mt. A will divest because we must. We must believe that this institution has the wherewithal to concede to the expertise of its PhD-anointed faculty, and the ethical and moral challenges posed by its student body.

That is why we brave the cold. That is why we participate in die-ins. That is why we circulate petitions, write op-eds, tweet and post to facebook and wear orange felt squares on our coats. We don’t do this because it’s fun (though, to be sure, building relationships and learning with and from one another is enjoyable in a myriad of ways). We do this because we must. Because fighting for fossil fuel divestment is fighting for climate justice and a future in which survival is possible.

If you haven’t already attended a meeting, signed the petition, or joined in a conversation about fossil fuel divestment, now is the time to do so. Now is the time to act, to engage, to bring about this positive change and urge this university to do the same. Because it’s not just possible, or even probable – it’s already happening.