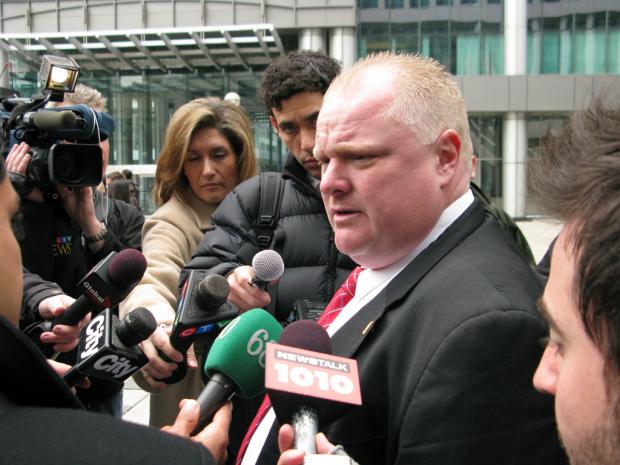 In a scandal that first started back in May, Toronto Mayor Rob Ford has become entangled in a labyrinthine web of controversy. From his admission to having smoked crack cocaine, to a rather explicit comment regarding sexual harassment allegations, and even to a video of a drunken rant where he graphically threatens to kill somebody, Ford seems to be caught in a downward spiral with no end in sight.

Despite all of this, he has thus far refused to step down as mayor. Yes, to reiterate, this man is still in office and shows no signs of giving up his post.

Ford’s actions have drawn an enormous amount of attention on an international scale, and unsurprisingly, little of it is positive. Jon Stewart, Stephen Colbert, and Jimmy Fallon have all made their share of jokes, and Saturday Night Live recently parodied Ford’s antics as their opening sketch.

To put it gently, Rob Ford’s actions are not painting Toronto – or, by extension, Canada – in a very favourable light. But are they just one manifestation of a larger problem?

Canadian municipal politics has been plagued by scandal in the past couple of years. London Mayor Joe Fontana will soon be facing trial under allegations that he used federal government funds to pay for his son’s wedding. Montreal recently lost two mayors in less than eight months, both due to charges of corruption.

And the problem isn’t limited to the municipal level either. In 2011, a scandal erupted in Ontario surrounding the Liberal government’s scrapped plans for a Mississauga power plant; in the end, Premier Dalton McGuinty and Energy Minister Chris Bentley both resigned.

To round out the Canadian cavalcade of political scandal, Parliament Hill is still coming to grips with the fallout of the recent Senate spending scandal. While Stephen Harper initially claimed to have no knowledge of the misspending, new evidence is increasingly implicating the Prime Minister’s Office. Three Senate members have been suspended, but many are calling for Harper himself to step down.

All of these incidents took place within roughly the last two years. With such damning evidence, it should come as no surprise that many Canadians are feeling disillusioned with contemporary politics.

But I find myself wondering whether our politicians are truly teetering on the brink of moral bankruptcy, or whether we’ve simply gotten better at finding and publicizing scandals.

After all, it’s only a scandal if the public hears about it. In recent years, freedom of information laws have been used more liberally and whistleblowers have been more apt to condemn officials’ behaviour than ever before.

Consider the NSA surveillance scandal in the United States, discussed in this very column a few weeks ago: had Edward Snowden not leaked information to the press, there would have been no controversy. Nobody would have known that anything was wrong.

And to be entirely fair, it’s not as if government scandals are anything new. Such prominent American examples as the Clinton sex scandal and Watergate come readily to mind. Here in Canada, our first Prime Minister, Sir John A. Macdonald, resigned in 1873 amid allegations of taking bribes.

And yet, for every political controversy documented in the history books, there were likely just as many that were never discovered. Today, these kinds of scandals are simply becoming harder to cover up. Politicians are as bad as ever, but certainly not worse.

As a matter of fact, it could easily be argued that these scandals are actually a good thing. The large public outcries surrounding them clearly signify that the public is not willing to accept such behaviour from elected officials, and will hopefully cause future politicians to toe the line a bit more prudently.

That being said, if our politicians needed an example to learn that smoking crack is a bad thing, I think that’s a bigger problem.