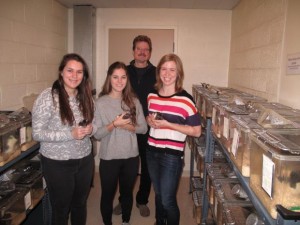 Researchers use rats to learn about psychological rewards.

While the Fitness Center may be filled with colloquial ‘gym rats,’ the basement of the Crabtree Building has actual rats that are just as fond of exercise. A professor and researcher in the Mount Allison’s psychology department, Terry Belke  and his honour students, study the psychology of running in these rats. Their research has found that running itself has powerful psychological rewards, but that these hinge on the runner’s weight and fitness. While Belke and his honours students conduct their research on rats, their findings have implications to the human psychology of exercise and fitness.

Both humans and rats have an innate incentive to run. But this incentive appears to vary based on an individual’s weight, as well as other factors like genetics or diet.

“We talk about using exercise to lose weight,” said Belke. “[Our] research suggests that it’s the other way around: if you lose weight, you will enhance the motivation to exercise.”

Belke’s lab measures how much rats are willing to “work” to satisfy their urge to run. These rats must press a lever to release the brakes on a running wheel for a certain amount of time. By adjusting how often the rats have to press the lever, the researchers can test the strength of the rats’ incentive to run under different conditions.

Belke’s honours students this year are also conducting research on the psychology of running.

Student researcher Sydney Mann is studying operant behaviour in the rats, or what the rats will do to get different kinds of rewards. She rewarded the rats with sugar after either pressing a lever or running. When the sugar reward was taken away, rats would not press the lever. Rats given sugar after running continued to run at the same rate when this reward was taken away, however.

Student researcher Kim Blunden is studying the effect of caffeine on the rats’ incentive to run. While caffeine has been found to stimulate physical activity and endurance, its effect on the incentive to exercise wasn’t examined.

“It looks as though there’s a possibility of an effect of caffeine [on the incentive to run],” said Blunden, “but the effect appears to be quite small.”

Belke said that running has many positive psychological benefits such as fighting depression and anxiety, and has even been found to stimulate the growth of neurons, or brain cells. He added that what his lab finds might inform people who want to exercise on how best to do it.

“The challenge is to learn how running is similar and different to other types of rewards,” Belke said. “We can use that information to suggest ways to enhance the enjoyment or value of exercise for people.”

The lab’s rats are also used in Belke’s psychology course on conditioning. “Both Kim [Blunden] and I were in that class, and that’s how I decided to do this as my honours project,” said Mann. “Not many undergraduate students get to work with lab animals in bigger universities.”

The incentive to run may have evolutionary origins, said Belke. According to the Activity Anorexia Hypothesis, the psychological rewards of running at low weights may have evolved for organisms to disperse in times of lean food.