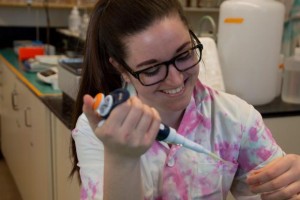 Mt. A honours student conducts research on effects of environment on sharks.

Gummy sharks are commonly found off the southern coast of Australia and are named after their unique plate-like teeth. School sharks, distinguished by an elongated snout, are migratory and inhabit the coastlines of most continents worldwide. School sharks have been listed as vulnerable since 2006, primarily due to overfishing through catch or direct targeting, as shark fins are a highly lucrative product.

As with most shark species, juvenile gummy and school sharks are born and matured in nurseries, areas that offer protection and resources for young sharks. Nurseries are typically in estuaries, regions where inland fresh water from streams mixes with saltwater from the sea. Shark nurseries are highly susceptible to salinity fluctuations resulting in young sharks being exposed to hypo-osmotic or dilute seawater.

Based on tracking data of juvenile gummy and school sharks in a Tasmanian estuary, gummy sharks move away from dilute seawater, while school sharks remain in their habitats. The goal of Mackellar’s project is to understand why there is a discrepancy in their behaviours, which may be caused by the differences in the physiological coping mechanisms of the two species in response to hypo-osmotic stress.

Sharks are particularly useful models for understanding physiological coping strategies to salinity changes due to their ability to osmoconform. While animals such as mammals and birds maintain a constant internal osmotic pressure, sharks osmoregulate by changing their internal fluid to match that of their surroundings. This is done by gaining or losing osmolytes such as urea. In low salinity, urea is lost, leading to lower levels of solutes in their fluid.

The experiment, conducted at the Institute for Marine and Antarctic Studies in Tasmania, Australia, involved exposing the sharks to hypo-osmotic seawater for 48 hours. Blood samples were taken throughout the time course, and gill and muscle samples were taken following the exposure. Samples were then shipped back to Currie’s lab at Mt. A, where Mackellar has since been carrying out several physiological and biochemical analyses.

Major endpoints of Mackellar’s research include urea, osmolality, intra- and extracellular ions, as well as levels of cellular stress indicated by heightened levels of heat shock proteins, particularly HSP70. Heat shock proteins, present in all organisms, are induced when cells are exposed to various stressful conditions.

Mackellar originally thought that school sharks would exhibit less signs of cellular stress indicated by lower levels of HSP70 due to their ability to remain in water of low salinity. However, the results from her research indicated the opposite. School sharks had higher HSP70 levels in comparison to gummy sharks.

“School sharks have a more robust increase in heat shock proteins. These sharks are highly migratory, meaning they will encounter many different environments during their lifetime, so they may have adapted to deal with different types of stress. They might just better at coping with it,” said Mackellar. Her results showed no real indication of a change in heat shock protein levels in gummy sharks. This could potentially explain why they are avoiding the hypo-osmotic stress, as they are less equipped to deal with it.

This research has important implications, particularly when it comes to climate change. Polar ice cap melting has led to massive effluxes of freshwater into the oceans, causing global and local decreases in salinity. Understanding how marine animals handle these changes is important, especially for sharks, whose populations are declining.

Mackellar hopes that findings from her study may one day help to provide insight for conservation efforts made towards protecting the natural habitats of these animals.

Her research also aims to better understand the two shark species, as there has never been any research conducted to study their physiology and response to different salinities.

“Research is intimidating at first, but it is fun. You get to do things that haven’t been done before,” said Mackellar. “Working with Dr. Currie is awesome. She is incredibly positive, supportive, and enthusiastic. She is always there when you need her.”

Sara Mackellar is planning to pursue health-care related graduate studies upon her graduation.