Centuries-old whale may be key to long life 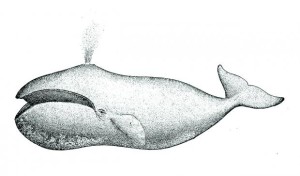 A study published in the journal, Cell Reports, by an international team led by researchers from the Institute of Integrative Biology at the University of Liverpool, is the first to look at Bowhead Whale genes in light of their aging process. It found mutations in genes related to aging and cancer development.

Bowhead Whales can live up to two centuries: one caught by Alaskan Inuit whalers in 2007 had a harpoon embedded in its flesh originally fired before 1885. They are also among the largest animals ever to have lived, some reaching up to 100 tons, larger than many dinosaurs. These whales have about 1,000 times as many cells as humans do, which, when combined with their old age, should result in higher rates of tumor growth and cancer. Yet relative rates of disease and tumor development are much lower in these whales than in humans and other animals. The study’s authors suspect that Bowheads have a genetic mechanism for suppressing the growth of tumors and diseases, as well as other mechanisms for extending their lifespan.

Aging is an inescapable part of being human, yet how and why it happens remains largely mysterious. A new study on the oldest known living mammal, the Bowhead Whale, may shed light on the role genetics plays in how animals, and therefore humans, grow old. By comparing the Bowhead’s sequenced genome to that of its shorter-lived relatives, the study was able to identify potential genetic adaptations that help the whales live so old with exceptionally low rates of cancer and disease. Its findings show a correlation between living longer and genetic adaptations, and may aid research in human aging.

Notable mutations in their genome include the ERCC1 gene. This gene is involved in repairing damaged DNA and correlated with shortened life spans in mice when impaired, as well as the BAMBI gene, which has been implicated in humans’ proneness to cancer and disease.

Mutations in the Bowhead genes were compared to the species’ closest relative: the Minke Whale. Minke Whales are shorter-lived, under fifty years, and smaller, weighing less than ten tons. Several genes were also duplicated in Bowhead Whales but not Minke Whales. Having duplicates of a gene affects how cells repair DNA and divide, and has led to past evolutionary innovations like human brain functions or the mammalian placenta. The LAMTOR1 gene was one notable duplicate in the Bowhead genome as it is strongly associated with aging and cancer development in humans.

Several hypotheses have been proposed for why organisms age, but none have been fully able to explain this phenomenon. Aging doesn’t appear integral to all life, as some animals do not seem to age. Some species of jellyfish, flatworms, crustaceans, and hydras, are considered biologically immortal: they display no signs of aging or of decreased fitness over time. Some vertebrates, such as sturgeons, turtles and tortoises are negligibly senescent, where signs of aging are very minor. How these animals overcome aging is a rapidly growing interest to the medical community, which hopes what we might learn from them could be applied to human aging, cancer and disease.

The study’s authors made the sequenced Bowhead Whale genome free and available to other researchers online at the Bowhead Whale Genome Resource website. While their study was focused on genes related to aging, their sequenced genome may be valuable to other scientists researching these whales.

This study was also unique as it  first sequenced the genome of an animal on which aboriginal communities are directly dependent for food. Most of the animals whose genome has been sequenced, such as cows or rats, are important in livestock or health research.