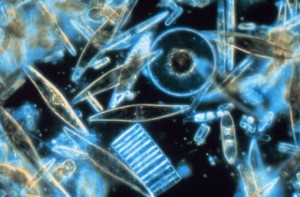 Two Mount Allison researchers are investigating the biochemistry of a very small but very important microorganism. Picocyanobacteria are microscopic phytoplankton, a type of marine algae. They are the most numerous organisms on Earth, and produce roughly 25 per cent of the oxygen we breathe. Amanda Cockshutt of the biochemistry department and her honours student Jessica Allanach are studying an anomalous protein in these microorganisms to shed light on their biochemistry, evolution and ecology.

Picocyanobacteria are exceptionally small in size, even among the tiny world of phytoplankton. They thrive in nutrient-poor waters where other algae can’t grow as well, and have come up with a unique adaptation technique to conserve cellular resources.

“These guys are the extreme examples of genome reducers,” said Cockshutt. Picocyanobacteria have shrunk their genomes to conserve resources during reproduction and DNA maintenance, giving them an edge in harsh environments. Some have genomes consisting of only about 1,700 genes. By comparison, humans have about 20,000-25,000 genes.

The information to build everything in a cell comes from its genes. According to Cockshutt and Allanach, picocyanobacteria have been of great interest to biochemists because they accomplish the same cellular functions of larger phytoplankton with a fraction of the genes. While the ways in which these phytoplankton build their photosynthetic apparatus have largely been explored, the function of a single protein remains unexplained and is the focus of the researchers’ current work.

The Hyperconserved Protein gene (HCP) is found in all strains of picocyanobacteria, but no one knows exactly what it codes for or does.

“To have a gene that has the same sequence at the amino acid level in all these strains, which are known for kicking out things they don’t need, is an indication that this protein has an essential function in the cell that we don’t know yet,” said Allanach.

The HCP is also found nowhere else in nature outside of picocyanobacteria.

“It doesn’t have a homology to any other protein out there, ever,” said Cockshutt, “so we can’t model what it does.”

Allanach’s  research involves investigating if the HC protein binds to other proteins found in picocyanobacteria, which would indicate its function in the cell. To do so, she uses E. coli cells which have had the HCP gene and other picocyanobacteria genes inserted into their genome.

Based on these protein-binding experiments, Cockshutt and Allanach suspect the protein is involved with the functioning of the ribosome or the assembly of photosynthetic apparatuses. Ribosomes are organelles – parts of a cell analogous to human organs – which assemble proteins based on genetic information. The proteins which picocyanobacteria use in photosynthesis may also face a unique challenge compared to other phytoplankton. The microorganisms’ small size squeezes their cellular membrane, which protects the cell from the outside environment. The proteins these cells use in photosynthesis fit into this membrane, and the HC protein may aid them in fitting into the marginal space.

The researchers said their findings may have implications on how these organisms respond to climate change. Cockshutt said smaller phytoplankton might become increasingly dominant as Earth’s oceans change with global climate, and Allanach said their findings might allow greater understanding of the role picocyanobacteria will play in climate change.

Cockshutt and Allanach also said that even though they work on phytoplankton, the methods and theory they use can be applied to any type of organism.

“The skills are transferable. That’s one of the great things about being a biochemist as opposed to being a biologist,” said Cockshutt. “Protein is protein, DNA is DNA, RNA is RNA. Once it’s ground up, it’s just a different colour.”