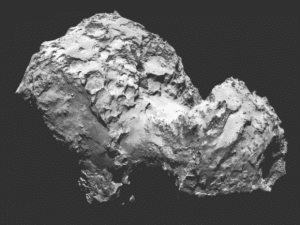 Is first to orbit, land on a comet.

Comets have been observed from Earth for millennia, and they were an astronomical mystery until relatively recently. They’ve been important markers for star-based calendars, harbingers of doom, astronomical quandaries and forefronts of scientific discovery. Now our understanding of comets is set to break another barrier.

On Aug. 6, the European Space Agency’s Rosetta satellite ended its ten-year journey and became the first satellite to rendezvous with a comet, known as 67P/Churyumov-Gerasimenko. Since then, it has collected unprecedented data on the bodies’ nature, as well as the clearest ever photographs taken of a comet. It has since been in orbit and will attempt history’s first landing on a comet’s surface, all while barreling towards the sun at 55,000 kilometers an hour.

Comets offer a bounty of scientific discoveries, significant to many fields of science and space exploration. Despite having been observed for thousands of years by humans on Earth, little is known in detail about comets’ physical composition or characteristics. They are of particular interest to solar system astronomers because they remain virtually unchanged since the formation of the solar system, offering insight into the birth of its planets and its satellites over 4.6 billion years ago.

Methods like spectroscopy and advanced satellite-based observations have been used since the twentieth century to show that comets were amalgams of frozen gases, water ice, rock and dust. Recent evidence also shows that comets may be a source of complex organic compounds critical to life on Earth, suggesting that they may have played a role in the inception of our planet’s first cells. In 2006, NASA’s Stardust satellite returned to Earth with samples ejected from a comet’s tail, which contained the amino acid Glycine, a common building block of cells. Rosetta will go a step further to collect material on site, or directly from the comet’s surface, which can be analyzed to a greater capacity than that from the Stardust mission.

Another mystery Rosetta may solve is the role comets played in the formation of Earth’s oceans. Abundant liquid water is perhaps the Earth’s most defining characteristic, yet where exactly it came from is an ongoing debate. Comets may have brought a fraction or a majority of Earth’s water during its formation. Rosetta will analyze the ratio of deuterium, a heavy isotope of hydrogen, to hydrogen and compare it to the ratio found in Earth’s oceans.

Rosetta lifted off in Feb. 2004 from Kourou, French Guiana. It has spent the last ten years gaining speed as it used heavenly bodies as gravitational slingshots. It entered a deep-space hibernation between May 2011 and Jan. 2014 to conserve power, and upon reactivation decelerated more than 700 meters per second to match 67P/C-G’s velocity. It is presently between Mars and Jupiter, accelerating toward a close pass of the sun on Aug. 2015.

Since its rendezvous around the comet on Aug. 6, Rosetta has been perfecting its erratic, triangular-shaped orbit in preparation for landing. The satellite’s lander, known as Philae, is projected to detach from the orbiter on Nov. 11. Upon landing, it will fire two harpoons into 67P/C-G to secure it against the comet’s weak gravity. It will begin conducting its experiments shortly thereafter, as well as observing the comet’s behaviour long term while venting material with heat from the approaching sun.