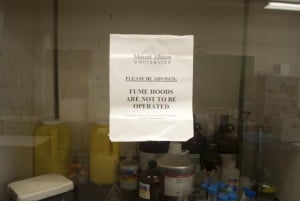 Students frustrated with lack of safety.

A fume hood is a type of ventilation device that is designed to limit exposure to hazardous or toxic fumes and vapours. A fume hood is an essential device in an environment where one is exposed to such hazards. A lack of access to functioning fume hoods has set a damper on research for Mount Allison biology students working in the Flemington building, as power to the fume hoods has been shut off since August.

Kami Harris and Amy Brown are masters students who work in a lab on Flemington’s third floor. They say the absence of ventilation hoods makes executing research and experiments difficult.

“I haven’t had to use strong [substances] yet,” Harris said, “but I will be using strong acids and bases to use [as buffers] in the future.”

“Whether or not we’re using it, we should have safe access to storage for our day to day activities,” Brown said.

Early in the semester, work on the fume hoods in Flemington revealed a potentially dangerous situation having to do with improper venting. As a result, all of the hoods in the building were shut down, and will remain closed off until testing of each one is complete.

“This is planned for the next few weeks,” said Margaret Beaton, a biology professor at Mt. A. Beaton sits on a committee that has been organized to discuss the fume hood issue.

“An equally important issue that is currently under study deals with overall ventilation requirements for teaching and research in this building. Facilities Management has contracted an engineer to evaluate requirements and options for remediating building deficiencies,” Beaton said.

Beaton says the report from an engineer regarding the issue is expected in mid-December.

“The issue is with the setup,” according to Rob MacCormack, director of facilities management at Mt. A. “Codes are different now, the equipment is older, and the pumps are older too.”

Students whose labs are in Flemington said they are upset by the lack of communication. The reason being that no alternatives were given to them regarding where to store their chemicals. As well, students are frustrated by the lack of updates about fixing the issue with the vents.

“Keeping us up-to-date after committee meetings would be beneficial,” said Brown.

Ryan Pinkham, a fourth-year biology student, claims the university is not addressing the issue properly.

“The students are the ones primarily exposed to the chemicals, and the lack of solutions is upsetting,” says Pinkham.

“It is more than just a[n out-of-order] sign on a fume hood,” he said. “We were told by [Dean of Science] Jeff Ollerhead to not store anything in the fume hoods, but we were not told where to move them to. There’s no other place to put them.”

At this point, the only option for research students in Flemington is to go to the neighbouring Barclay building, but that too poses difficulties: Biology students do not have keys to Barclay. They also do not know when they can go into the labs to use their chemicals.

“It’s not practical to travel to Barclay carrying our [chemicals],” Harris said.

Arrangements have already been made for biology labs using formaldehyde to take place in Barclay, where there are functioning fume hoods, but the implication of this decision has students worried. They fear the issue might not be fixed until well into second semester. When asked if the fume hoods will be operational in the coming semester, MacCormack had no idea.